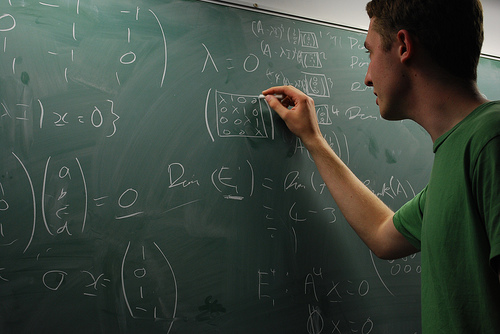 Why is Mathematics important?

Firstly, let me clarify what is meant by Mathematics. It isn’t the addition and subtraction that we use every day to work out how much money we’re spending at Tesco – that’s arithmetic and we can all understand how that is important. This article will focus on high level mathematics – really abstract weird stuff – and show that is does affect our lives every single day.

Specifically, this article will focus on only one important piece of maths: RSA-Cryptography. RSA stands for Rivest, Shamir, Adleman: the three men credited with its invention at MIT in 1977. (Interestingly, RSA was developed three years earlier by an Englishman named Clifford Cocks, but was classified until 1997). Cryptography is the art of sending information securely over insecure lines – a primitive example would be two cockneys in a pub using rhyming slang; one says to the other “I’m in deep Barney” and the other knows that he is in (Barney Rubble) Trouble, yet anybody else in the pub would hear nonsense. Fast forward a century to Britain and the US sharing military secrets whilst concealing them from the USSR and “We’re moving our basketballs south” (basketball hoops = troops) is complex enough to stump the soviets for all of 3 seconds.

Fortunately, cryptography had advanced since then: take the Nazi Enigma machine. It was based on a millennium old technique of switching letters (Julius Caesar was one of the first to use this technique) but made it so horrendously complex that working out how to switch the letters back would take so long that by the time the message was decoded it was out of date. To decode the message you needed to know how to set up the machine. This meant that all German Enigma operators had a booklet of all the set-ups for that month; if allied forces got hold of this information then they could intercept messages for the rest of that month, which was one of the key flaws. So, in the 1970s, mathematicians started to look at methods of encoding so that anybody could be told how to encode data but only certain people could decode it (so in effect fewer people would need the ’decoding booklet’). They started looking at “one-way functions”, which is an action performed on a number such that if you’re given the answer then you cannot work out the initial value. A simple example would be taking the remainder of division: if you divide 26 by 11 you get remainder 4. If you tell me you have remainder 4 I can’t work out was your original number was; 15, 26, 37, 48, 59, 70 would all give me remainder 4 (so would infinitely other numbers).

RSA Cryptography is based on a similar idea, but it much more complex (it would take many many pages to explain it). Its strength is determined by the difficulty of factorising large numbers. Factorising is breaking down a large number into the product of smaller numbers and repeating until you have prime numbers which are not the products of other numbers, take 100: 100=2×50=2x2x25=2x2x5x5. 100 isn’t too difficult: but how about 629? After a bit of trial and error you’d find that 629=17*37. If you made a computer programme you could easily find 48137027=7589×6343, but what if the number you needed to factorise was over six hundred digits long? It is so difficult to factorise large numbers that the company who develop RSA cryptography have offered a $200,000 prize to the first person to factorise a set 617 digit number. So we know that RSA is a strong method of communicating and we know that it has been used to communicate military secrets but how is it useful to me and you?

RSA is the basis for all internet security; every time you submit your credit card details online they are protected using RSA technology. Have a look on Facebook – do you see a little padlock in the address bar? Then the information coming to your computer from Facebook is being protected by RSA. Prior to the invention of RSA, if a company wanted to send information from one office to another they needed to send a man with a secret code to the other office so that they could decode the received information. RSA has transformed how information exchange works and has allowed the convenience of internet shopping and private internet communications into your life. So do you still think that Mathematics in unimportant? RSA in only one of many examples of how Mathematics has changed our lives for the better.