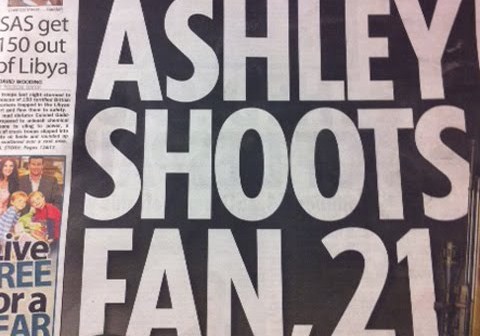 Muhammad Ali, “The Greatest”, the first heavyweight boxer to win the belt three separate times, was widely renowned as the most talented, and beautiful, boxer in sporting history. In 1966, he refused to be enlisted into the U.S. Armed Forces, stating:

“Why should they ask me to put on a uniform and go ten thousand miles from home and drop bombs and bullets on brown people in Vietnam while so-called Negro people in Louisville are treated like dogs and denied simple human rights?”

Consequently, Ali was stripped of his titles and boxing licence, putting his career on hold for a four year fight to appeal the charges. This is not the first time, nor the last, a sporting celebrity has used their fame to set an example.

Eleanor Simmonds has won four Olympics gold medals, two in Beijing, two in London, and been awarded an MBE, all before her eighteenth birthday, despite being only four foot tall. She told Stephen Moss, a journalist for the Guardian, “There are people out there who think they can’t do anything, so just sit around all day”, relating how she has never let her achondroplasia stop her, and her hopes that she will inspire everyone, not just those with similar disabilities.

The BBC has started a new initiative to cover more women’s sport, promoting athletes like Simmonds as role models for young women. This brings me to my question: should sporting figures be made role models? It has been debated, near exhaustively, in articles about the likes of Tiger Woods and Wayne Rooney. The first thing to establish is: what makes a good role model?

Prudence, justice, temperance, fortitude, faith, hope, and charity are virtues each and every one of us should uphold, or at least they are according to the Catholic catechism. An atheist might replace faith with dedication, but in general, let us agree that these are the attributes of a decent individual.

Luis Suárez for example was charged with racism against footballer Patrice Evra in November of 2011. In a match against Mansfield Park, Suárez scored by handball winning the match for Liverpool, and has frequently been accused of diving. Ashley Cole has been disciplined for abusive Tweets, and for swearing at a police officer. His ex-wife, Cheryl Cole, told journalists that he was an adulterer, and, most disgracefully, shot a student with an air rifle.

But before condemning Suárez and Cole as undeserving of their limelight, is it reasonable to judge them by these standards? A politician or a judge certainly should exhibit a strong moral and honourable temperament; it’s a prerequisite of their occupations. An athlete, however, is employed based upon their performance. So perhaps the standards to which we hold them should be reviewed.

What makes a good sporting role model? Dedication is of course necessary in achieving the athleticism of a professional, as is abstinence, but only so far as in they need to be in good health. There are traits specific to a sporting role model also: to keep competition fair performance enhancers are outlawed, and good-sportsmanship is expected; not cheating, and graciousness.

By these new criteria, Cole is a worthy role model, whilst Suárez remains not. Two other, more extreme examples could be: Diego Maradona; who in the same match scored what was voted “The Goal of the Century”, and “The Hand of God”, probably the most brazen foul in football’s history. And Steven Gerrard; who has loyally played for Liverpool for the entirety of his fifteen year career, and earned the England captaincy.

Thus the issue of whether a sports star makes a good role model in general, lies with the media. The coverage of them off-field reveals the private side of their lives, which should be distinct from their idolism, as, off-field, they are just like any other person. So long as it stays off-field.