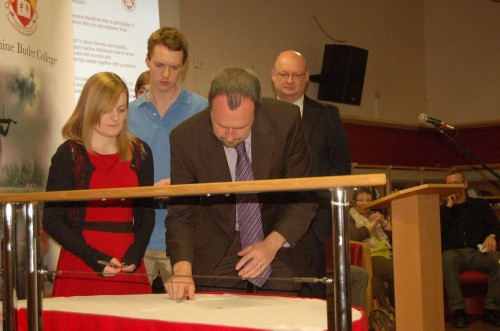 Josephine Butler College signed up to the principles of a government supported scheme known as the Sports Charter on the 12th March 2012. The charter is a scheme designed to raise awareness and combat homophobia and transphobia in sport. The charter can be read here- www.homeoffice.gov.uk/publications/equalities/lgbt-equality-publications/sports-charter?view=Binary

The Sports Charter is a bad, bad idea…but also an excellent one. At its worst it represents tokenism, conscience cleansing, an unfulfilled promise, a public relations exercise and an excuse not to take real action. At its best it is a message of solidarity, a warning to homophobes, recognition of a problem and a celebration of the power of inclusive sport.

On the day of the Charter signing, I remember urging the people there to “go away, read, think and act”. Those were words I dwelt upon as I wrote them in advance and as I said them. Without wanting to sound grandiose (or obvious), action is the difference between the Sports Charter being a good idea and a bad one.

If everyone that comes across the Sports Charter project, whether in Butler or the offices of some sports governing body, simply dedicates half an hour of their time and thought to the subject, I would classify that as a tokenistic exercise. A few good headlines, an equality box ticked and a ready-made retort to the next damning report on the sexual homogeny of sport.

Conversely, the Sports Charter is a success if it is the beginning of a process that brings changes in attitudes, less homophobia and transphobia, more support for people that need it and greater sensitivity. A piece of paper with some well-intentioned statements on it does not make a difference to people’s lives. Action does. Eradicating homophobia on the sports ground and beyond and the beginning of sympathy (but not pity) with someone’s position are actions that can make a positive difference in the experience of sport for all. While these might sound like big objectives, they are achieved quite simply through sportspeople and fans thinking about what they say and thinking about its effect on others.

Our choice of language and phrases often betrays the way we think about things. For example, I have struggled to choose between the current and past tense when describing the Charter: “the Charter is” or “the charter was”? I chose the present tense in an uncharacteristically optimistic way. The correctness of this choice depends on whether the Charter lives, continues, remains, or whether it was an event, a one off, an historical curiosity. Your insight is ultimately more current than mine on this point, but a Charter that continues would be a great compliment to Butler as an institution, as a collection of people and as an identity. It would be proof that ‘Butler Spirit’ is about more than team bonding, a group of friends or an intoxicated chant, but is closer to mutual respect, perseverance and selflessness.

Against the increasingly loud background noise of tokenism, conscience cleansing, unfulfilled promises and public relations stunts; it is the actions of offering solidarity and recognition, support and sympathy that will be heard. In other words, if you want change- act!

Ben Warwick is a Butler Alumus and is now at the University of Nottingham studying Human Rights Law. He can be contacted at btcw@me.com or tweeted at @btcwarwick