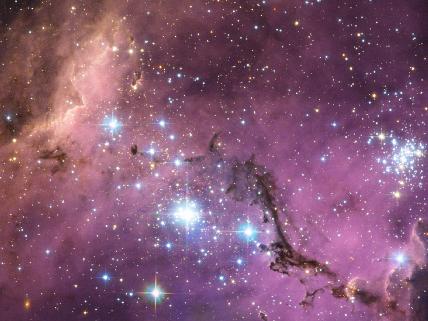 Building Blocks of the Universe

‘You’re a star’ is a term often used to thank someone when they have done something kind for you, but how accurate is this statement? Realistically, that person is clearly not a giant astronomical object fusing hydrogen in their centre of mass and emitting high levels of radiation, but on a fundamental scale, a human and a star are actually composed of the exact same things.

Consider the chair that you are probably sat on. It is most likely either made from plastic or wood. Let us assume that it is plastic, or more specifically, polyethylene, which is a common type of plastic used in chairs and other rigid structures. Polyethylene is an ethyl chain of molecules which are composed of only Carbon and Hydrogen atoms.

We are getting into scientific terms now, so let us take a quick recap of basic chemistry and physics (if you follow so far you may as well skip to the next paragraph). Atoms are the basic building blocks of all macroscopic matter – that is, everything we can see. A good analogy for atoms is Lego blocks. Imaging that each small block is a single atom, and just like the different colours of Lego blocks, we have different varieties of atoms (118, in fact). The different atoms are referred to as the elements. Remember the periodic table from chemistry GCSE (yes it’s come back to haunt you)? The periodic table displays all the different elements: for example, Hydrogen, Oxygen, Silver and Uranium are all different elements, and all of which are atoms. Additionally, like Lego blocks, we can combine their atoms together to make larger structures called molecules. For example, water is known as H2O, which is composed of two Hydrogen atoms attached to one Oxygen atom. These water molecules can then join together in large numbers to form visible structures, such as a water droplet. Essentially, however, whether it is a single water droplet, a blast of steam or a snowflake, water is only composed of Hydrogen and Oxygen atoms.

Back to Polyethylene, which is made from Carbon atoms bonded to lots of Hydrogen atoms: until the beginning of the 1900s, we thought that this was all there was to the story, that atoms were as fundamental as you could go. However, through a genius experiment, Ernest Rutherford managed to work out that there was something even smaller that makes up atoms. The experiment in question is the gold foil experiment; it’s a riveting tale of wonder, excitement and deceit.  Rutherford and his genius ways realised that atoms were actually not neutrally charged as science has previously assumed, but that there was, in fact, a large positive charge at the centre of them. The implication of this is that as on a larger scale most atoms seem neutral (I say some because in some bonding issues and at high temperatures atoms can be charged), there must be a similar magnitude, but much smaller mass, negative charge orbiting the positive centre. Both these charges cancel each other out on a larger scale so that the atom seems neutral. A good way to picture this is the earth revolving round the sun: the sun is the large and positive particle known as the proton, and the earth is the small, negatively charged electron whizzing around it.

There is, in fact, another “atomic” particle known as the neutron, which is of the same mass as the proton and sits with it in the centre of the atom, but has no charge. This picture works on a basis scale but actually breaks down on an even more fundamental level. As Professor Brian Cox once stated, if the proton was the size of an apple, the electron would be the size of a pin-head and be located over one kilometre away! So what about all that empty space between these two particles? Without going too far into complex physics, we can model the electron not as a particle, but as a wave, using the wave-particle duality theory (or the party-wave effect, if you like). Ultimately, modelling the electron as a wave solves this problem of ‘empty space’. So to summarise: all atoms – all the elements, in fact – are made simply up from protons, neutrons and electrons.

To conclude, when someone tells you then that ‘you’re a star’, you actually are, in fact, made from the same stuff that stars are. Those fundamental building blocks of protons, neutrons and electrons make up every large, visible, structure in the universe. This is not the entire story, however: protons and neutrons are actually made up of smaller particles called quarks (pronounced quork, rhymes with squawk) and a large amount of the universe is made up of massless photons and near massless neutrinos, but all this can be saved for a later date.  For now, it is enough to say that physics has broken down matter into a very fundamental level and found that everything is basically the same on a small scale.