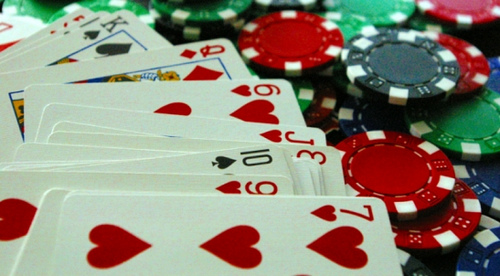 You are at a poker table, a poker hand face down in front of you, accompanied by several poker faced players, and the scent of whisky and cigars no poker game is without! As you look around, waiting for the first of five cards to be revealed, you think hard about what the card might be; one of four suits, and thirteen numbers. Until it’s turned over, you have no choice but to think of it as any one of these cards.

Finally, the moment arrives. You peer down at the card, apprehensive (though no one notices, because you also have an excellent poker face). It’s the three of clubs. You don’t know why it’s the three of clubs, but that’s the way your luck has gone. All you can do now it think about the next card. The same thought process occurs; it could be any one of four suits, and thirteen numbers, completely at random. But, you do know one other thing. That face down card, nor any of the others, is the three of clubs!

Lo and behold, the next card is exposed; the queen of spades. How clever you are to have realised that it definitely wouldn’t be the three of clubs. You allow yourself a congratulatory sip of your high quality, very high priced, whisky. You return the glass to your elbow as you look back at the table, only to spray the whisky over the player opposite. The croupier has taken in all the cards, and is deftly shuffling them.

By the time you have wiped the residue from your face, five new, unknown cards are face down on the table. I must, regrettably, be the bearer of bad news; despite appearances, this is not a game of poker. This is quantum mechanics.

Quantum mechanics is one of those things which sounds like it’s out of a dodgy Star Trek episode. One moment things make sense, the next, the audience is lost. And that’s how it is for scientists too, even those that founded quantum theory. But if you understand the poker scenario, then you pretty much get the idea.

Take an electron; a very small, very common particle. Electrons have differentiating features, just like playing cards, and, just like a pack of cards, no two in a pack are the same (a pack would be an atom). Let’s look at the same scenario, but using electrons.

There’s an atom on the table (a tellurium atom for the sake of consistency). Five of its electrons will be revealed, one at a time. Until they are, you have to think as though each of them is any one of the still unseen electrons. The first is revealed; it’s an n=3, l=2, m=2, s=0.5 electron; a load of gibberish really, all you care about are two things. First, no other electron will have all the same values for n, l, m, and s. Second, don’t blink. The problem with quantum scenarios is that the moment you stop looking, all the electrons you saw go back to being any one of the possible electrons.

What we’ve been discussing is called Pauli’s Exclusion Principle, but it’s the same for all quantum mechanics. When you’re not watching, a particle has every property it can be thought of having, all at the same time, even its location. Until you look at it, that electron could be anywhere on the table, anywhere in the whole room even. It’s just much more likely to be in the atom.

This is a major issue. The whole point of physics is to describe what’s really going on, so for physicists to throw their hands in the air and say “I’m not looking, so who knows!” seems like a bit of a cop-out. It especially annoyed Erwin Schrödinger, one of the key physicists who developed quantum mechanics, that all of his peers were just going along with it.

You’ve heard of Schrödinger’s Cat; a cat in a box, with a radioactive isotope, a Geiger counter, and a sealed vial of toxic gas. When the isotope decays, it releases radiation, which sets off the Geiger counter, which breaks the vial of poison, and the cat comes to a tragic end. The crux is that radioactive decay is a quantum process, so no one has any way of knowing when it will happen. Like when playing poker, until you look, you must account for every possibility; the isotope has decayed and not decayed, so the cat is alive and dead.

When most people hear this they think “The cat is both dead and alive at the same time? Wow, physics is amazing!” or, more likely, “That poor cat, Schrödinger should of been reported to the RSPCA.” What Schrödinger actually meant to illustrate was how absolutely ridiculous quantum mechanics is. As far as he was concerned, it was the best model for electrons, radioactivity, and a load of other stuff, but it by no means described what is actually going on.

If it didn’t, understanding it would be easy. Even someone with no knowledge of quantum mechanics could get by with some simple poker strategy. That is why I must emphasise it is not a model, some abstract mathematics on a chalk board. It is exactly what happens. While your back is turned, an electron behaves like a wave, a combination of potential particles. When observed, it inexplicably chooses, at random, what kind of electron it should be. When you look again, it could be the same, or different.

It’s unbearably complex, and hugely lacking in substance, but if the universe didn’t work like this, we wouldn’t have computers, which rely on electrons. We wouldn’t have stars, which are powered by radiation. Atoms would collapse in on themselves, and the universe simply couldn’t exist.

For further reading, see Quantum: A Guide for the Perplexed by Jim Al-Khalili, or for a more rigorous, but still approachable, discourse QED: The Strange Theory of Light and Matter by Richard Feynman.