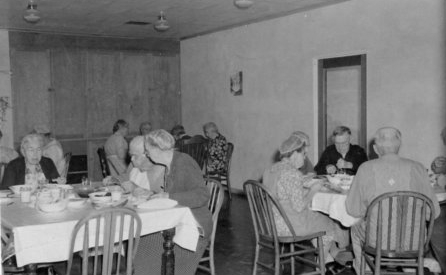 (Quotes included are from interviews with a nurse and NVQ care assistant about their experiences working in private care institutions).

Private institutions for residential care have a vital role in caring for society’s most vulnerable members: the elderly, the young, the mentally and physically disabled – those who have no choice other than to pay for round the clock care. Nevertheless, often the term “care home” can appear to be somewhat a misnomer, with cases of abuse in care institutions frequently making national news, for example:

Some forms of abuse within institutions, however, are unlikely to hit headlines and are easy to overlook. Lack of choice in food, clothing and activities, as well as rigid daily routines, slip under the radar when scrutinising the possibility of abuse. However, these things can have detrimental effects on the self-esteem and individuality of residents. “When carers have conversations over residents’ heads without involving them – to me, that’s abuse” says one nurse “also, patronising residents, and talking down to them.” Although these highly common practices are rarely performed with intention for cruelty, these acts can result in feelings of invisibility and worthlessness. For those who are already unable to change many aspects of their situation, being made to feel that they have choices is key to quality of life. Institutional abuse can be as harmful as other forms of cruelty and neglect, often resulting in depression and contributing to patients’ daily struggles.

Current legislation states that those in care must be given full autonomy over their lives, and as with all abuse, those most vulnerable to institutional abuse are those without means to express themselves. Although current training emphasises the importance of treating those with dementia in the same way as they would have liked before the onset of their illness, it is this group of people who have the highest risk of de-individualisation due to their apparent unawareness and inability to speak out about their situation. One carer speaks about their experience in a dementia nursing home:

“They used to line up all of the women in the front room and brush their hair one by one, and then spray them all with the same body spray. The same happened for the men: they were lined up and shaved in front of everyone else. It was a complete invasion of privacy, and who knows how much they knew about what they were experiencing?”

The financial aspect of private institutions can also be a large contributing factor in the continuance of institutional abuse. Where owners are looking to make large profits above quality of care, practices essential for preserving the dignity and health of residents can often fall by the wayside. “Everything was designed to cut corners. All of the residents had to share the same cheap body wash, which was also used as shampoo. All of the food was as cheap as possible, and for those who couldn’t eat solid food, they put all of the food into a blender together and served them a brown mash” says one carer, speaking of their experiences at a nursing home for dementia. “If there was an NVQ assessor there, the food would be served properly, in separate portions. When I challenged them and asked them why it didn’t happen when the assessors weren’t there, they had no answer”.

Working in an environment in which institutional abuse is taking place can be incredibly difficult. Often, care workers are too inexperienced to know what is normal practice and it is hard for those who are concerned that practices may not be correct to stand up to more senior staff. “Established employees can be hostile towards new ideas and criticism of practices” says one nurse “it can be very difficult to make changes”. In the experience of some, standing up against maltreatment of residents often falls on deaf ears. “I reported the care home to the CQC (care quality commission) but I never heard back from them, and all I know is that the home is still open” says one carer, speaking of their attempts to report severe abuse taking place at their previous employment. In this situation, the powerlessness of employees to change the system leaves them with a choice: to retain their source of income and propagate abuse, or to leave and seek other employment.

It is clear that more measures need to be in place to prevent the systematic de-individualisation of vulnerable adults. Some possible measures involve the CQC themselves, with a clear necessity for random spot-checks and more thorough inspections to take place in order to spot and prevent abuse within private residential care. Private interviews with staff could also offer the potential to gain information on malpractice within care. “Sometimes people are afraid to step forward” says one care-worker, “if you made interviews anonymous, people are more likely to report abuse”.

Motivation can also be an important factor in perpetuating abuse. Care work is notoriously a poorly paid and highly stressful vocation, and frustrations caused by under-staffing and long hours can result in behaviour that can make residents feel unwelcome or unwanted. “Sometimes, it’s small things like body language” says one nurse “when you tell someone that you’re happy to be caring for them, but your body language says that you don’t want to be there, people pick up on that”. Better conditions for staff, as well as a higher screening for employees may result in improved service for residents.

Institutional abuse is so dangerous because it is easy to commit, and so detrimental to the daily well-being of its victims. Actions such dressing residents in mismatched clothes, sending them to bed early, or not drawing curtains during care are habits that are easy to fall into because it is at times hard for people to recognise their own behaviour as abusive. Although current training covers institutional abuse and its dangers, more frequent reminders are needed in order to raise awareness of how to protect the vulnerable and give them dignity. Both residents and new staff need to be given more confidence that their voice will be heard and their concerns taken seriously, as it can often be hard to speak up against colleagues. “When I first started working at the home, what was going on didn’t seem right, but I was inexperienced and everyone else thought it was normal” says one carer. “It was only when I did my NVQ that I realised that my instinct was correct.”