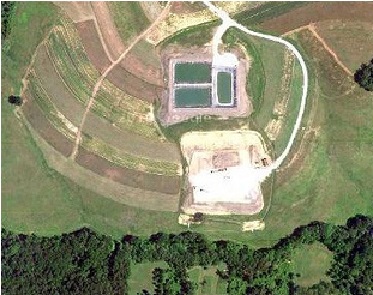 Hydraulic fracturing, or ‘fracking’, is the process of drilling and injecting fluid into the ground at a high pressure in order to fracture shale rocks and release natural gas or oil. Fractures provide a conductive path connecting a larger volume of the reservoir to the well. Some hydraulic fractures form naturally, such as veins or dykes, and can create conduits along which gas and petroleum from source rocks may migrate to reservoir rocks. Induced hydraulic fracturing (fracking) enables the production of natural gas and oil from rock formations at depths of up to 20000ft, where there may not be sufficient permeability or reservoir pressure to allow natural gas and oil to flow from the rock into the wellbore at economic rates.

The whole process of fracking has been given a bad name and alternative uses forgotten. In some countries such as the US, Australia, and South Africa, hydraulic fracturing has enabled increased yield of drinking water from wells. However, the use of a cocktail of chemicals within the fracking fluid has led to much controversy as new sources of non-renewables are eagerly sought.

In the US, each gas well requires an average of 400 tankers to carry water and supplies to and from the site, with 1-8 million gallons of water required to complete each fracturing job. The water brought in is mixed with sand and chemicals to create fracking fluid. Approximately 40,000 gallons of over 600 chemicals are used per fracturing, including known carcinogens and toxins such as lead, uraninum, mercury, and hydrochloric acid. Methane gas and toxic chemicals leach out from the system and contaminate nearby groundwater, with studies suggesting that methane concentrations can be up to 17 times higher in drinking water near fracturing sites than in normal wells. There have been over 1000 documented cases of water contamination next to areas of gas drilling as well as cases of sensory, respiratory, and neurological damage due to ingested contaminated water.

When the mixture reaches the end of the well, the high pressure causes the nearby shale rock to crack, creating fissures where natural gas flows into the well. The waste fluid is left in open air pits to evaporate, releasing harmful VOC’s (volatile organic compounds) into the atmosphere, creating contaminated air, acid rain, and ground level ozone.

There are 500,000 active gas wells in the US, and with 8 million gallons of water required per fracking and the ability of each well to be fracked 18 times, 72 trillion gallons of water and 360 billion gallons of chemicals are needed to run the current gas wells. Approximately 300,000 barrels of natural gas are produced per day, but the longevity of sites is only within the order of decades, so new wells are vital to maintain productivity.

According to the US Department of Energy, hydraulic fracturing fluid is composed of approximately 95% water, 4.5% sand, and 0.5% of up to 65 different chemicals, often including benzyne and ethanol. Many are carcinogenic and can cause forestomach ulcers, tissue damage, and a decrease in the number of red blood cells above 125ppm exposure. Over 75% of 353 possible chemicals affect the skin, eyes, and other sensory organs, 52% affect the nervous system, 40% affect the immune and kidney system and 46% affect the cardiovascular system and blood, depending upon the dosage.

There are many other concerns surrounding fracking, including ground water contamination, risks to air quality, migration of gases and chemicals to the surface and mishandling of waste. There is also great uncertainty surrounding the impact on atmospheric CO2 levels through enabling the extraction of previously sequestered hydrocarbons.

In addition, seismicity poses a potential hazard. Cuadrilla’s operations in Blackpool were thought to cause two small earthquakes in 2011, halting any further operations and sparking huge protests against the growing focus upon Lancashire as a promising source of UK shale gas. Local uproar has brought forward many objections, including the lack of regulations, huge health and environmental risks, aquifer contamination, radioactive sources, increased traffic, huge water usage, contaminated sludge, earthquakes, land subsidence and impact upon the tourist industry.

Nevertheless, over 300 licences have been granted for onshore fracking sites and a fifth have been described as ‘substantial’. Plans then need to explore the shale potential, ensure community involvement and gain the necessary planning permissions and permits. A growing knowledge surrounding the subject means such plans are more likely to go ahead. It is believed that the UK and Europe can learn from a decade of American trial and error with stricter practices, for example the use of at least three layers of castings to better guard against leaks, compared to the two layers used in the US.

Ultimately shale gas is a fossil fuel which will contribute to global warming and trigger a new ‘dash for gas’ that will prevent climate change targets from being reached and deter focus from investing in renewables. Local communities have been allowed to veto wind farm operations, but the likelihood of the same thing happening for fracking is slim, even though the threat toward drinking water should surely be of higher importance than the visual impact of wind turbines. It is easy to stick to what we know with the use of fossil fuels, but there will come a point when there really is nothing left to extract. It can only be hoped that the environment, and society, can recover.