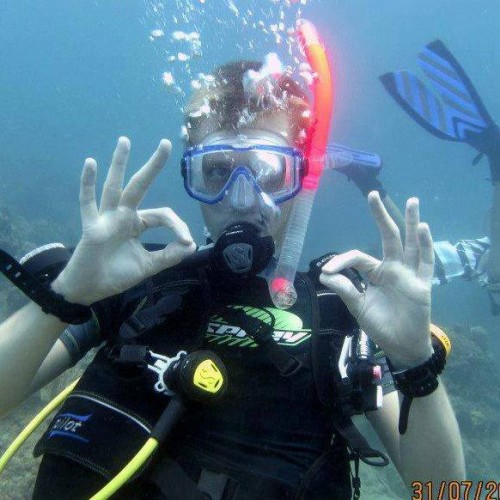 Covering less than 0.1% of the surface of the oceans, but supporting over a quarter of all marine life, coral reefs are some of the most biologically diverse areas on our planet. If you ever have the privilege to dive on a coral reef you will see the incredible diversity of animals, a multitude of incredibly inventive adaptions and so many symbiotic relationships you get the impression of a perfectly designed and incredibly intricate jigsaw.

Coral reefs are so much more than a haven for divers and biologists: they are not self-contained ecosystems but support larger fish that are part of the global marine ecosystem. So if we lost, for example, all the rabbitfish from the coral reefs few people would be directly impacted, yet as a part of tunas’ diets the loss of rabbitfish would affect tuna stocks, which would have a big affect on a lot more people.

About six million tons of fish are taken each year from coral reefs. Well-managed coral reefs have an annual yield of 15 tons of seafood on average per square kilometre. The economic impact of coral reefs goes beyond food to tourism and coastline protection. The global economic value of coral reefs has been estimated at as much as £250 billion per year. Coral reefs protect shorelines by absorbing wave energy, and many small islands would not exist without their reefs to protect them. It is estimated that the economic cost over a 25-year period of destroying one kilometre of coral reef is somewhere between £90,000 and £800,000.

Furthermore the loss of reefs would have a large effect on our environment, coral reefs regulate the amount of carbon dioxide in our oceans and their loss would cause an imbalance that would severely impact all marine creatures. On top of this, coral reefs are very specialised and would not be able to re-grow in such an unstable environment.

Reefs are of huge value to scientists, and we are a very long way from knowing everything there is to know about coral reefs, or even the ocean. On average 2 new fish species are discovered every week. These undiscovered organisms may hold the key to curing human conditions. It is often said that “we know more about space than our own oceans” and whilst I don’t necessarily agree with this it does highlight that we know very little about our oceans. Take trenches in the Hadal zone, which includes the Mariana trench; they are largely unexplored and occupy 3% of the ocean floor yet they are teeming with life and occupy an area larger than Australia. Coral Reefs are the rainforests of the sea and like the rainforests we are destroying them before we have time to learn all that they have to teach us.

Coral reefs around the world are dying; locally they are under threat from pollution, overfishing and invasive fishing methods. Globally they are threatened by sea temperature rises, sea level rise and ocean acidification, all caused by greenhouse gas emission. Even if it does not kill the coral, pollution and the effects of greenhouse gases will inhibit coral growth.

There are natural threats to corals; El Niño is a band of anomalously warm water that develops on the west coast of South America and can cause climate changes in the Pacific, which include increased ocean temperatures. The increased ocean temperatures cause the corals to bleach and often leads to their death; in 1998 the El Niño event caused 16% of the world’s reefs to die. 1998 was a particularly bad year and El Niño does not happen every year but these events have become increasingly frequent in recent years and it is believed that this is linked to climate change.

Current estimates show around 10% of the world’s coral reefs are dead and 60% are considered at risk due to human-related activities. It is predicted that by 2050 all coral reefs will be dead or at risk.

Generally considered the most effective way to protect coral reefs, marine protected areas (MPAs) are being implemented across the globe. A marine protected area is similar to a national park where restrictions are placed on potentially damaging activities, such as fishing and diving. In such places efforts are made to work with the community to create the MPA to reduce conflict. A well enacted MPA can provide revenue equal to the income that would have been generated without controls, for example the Pheonix Islands Protected Area (the world’s largest MPA covering a area the size of California).

Implementing a MPA is by no means easy but it is much simpler than solving the global issues. Pollution can be reduced on a local level and can be encouraged on a larger level with legislation like the Clean Water Act (USA) but often pollution is a created by industry and governments are reluctant to create laws which inhibit industry, especially in poorer countries (as a lot of countries with reefs are).

Global warming is the largest long term threat to coral reefs, its causes and solutions are far to complex and multifaceted to discuss in this article but it will suffice to say that if global warming continues in line with current predictions all our work creating MPAs and reducing pollution will be in vain.

Recently, more of an impetus has been placed on restoring damaged reefs, this involves introducing artificial substrates for corals to grow on which can range from car tyres to specially formed non-toxic concrete. Dissolved minerals in seawater can be crystallised onto steel structures which forms an aragonite coating, the same material which coral reefs are naturally made of, this will accelerate coral formation and initial growth rate on these structures. Another method is to grow corals in nurseries and then replant them onto artificial substrates, this bypasses the early growth stages when the coral is most fragile.

Both of these methods are effective for restoring corals in non-polluted environments where the environmental conditions for coral growth are still intact.

A final, controversial, idea is gene therapy, by infecting corals with genetically modified bacteria it may be possible to grow corals more resistant to climate change and pollution.

Our reefs are facing many threats from different sources on different scales, regardless of who is to blame we must work together to find a solution or we risk losing our reefs and all that comes with them forever.