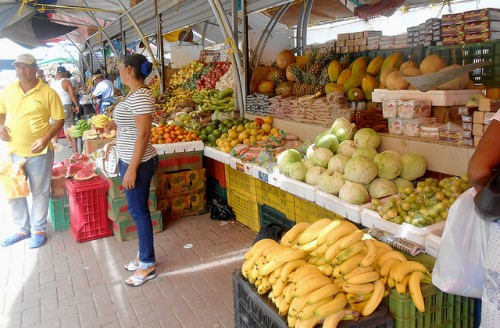 ‘Food miles’ are often assumed to be a suitable indicator of environmental-friendliness and have become perceived as a panacea label for determining carbon impact. As a result, it is presumed that eating local food is environmentally superior to that produced, and thus transported from, overseas. However, attached to the emphasis on local food is a disregard for carbon produced from cooking or transporting food within the UK itself. There is a failure to distinguish between carbon intensities of different modes of transport and area suitability for products, meaning that food miles may not be the greenest measure of consumption.

Food miles attempt to measure the distance food travels between the point of production and the point of consumption. With the globalisation of the food industry, food consumed in the UK is sourced on an increasingly global basis, resulting in greater transportation of goods. For example, Lang suggests that by 2002, food accounted for 25% of all HGV transport in the UK. Therefore, it is believed that purchasing local produce reduces food miles, and thus, is an environmentally desirable consumer choice. However, reducing food miles entails surrendering everyday food choices. For example, transporting a kilogram of bananas from India to the UK releases 4.67kg of carbon. Even the traditional cup of tea, morning espresso and kitchen basics, such as cinnamon and olive oil, have long distances attached. Thus, regardless of its value as an environmental indicator, reducing food miles may be an impractical goal.

The food miles concept acknowledges the importance of transport in the food chain. This includes transporting food overseas and domestically between intermediaries along the food chain. However, food needn’t come from an exotic location to accumulate food miles. Significant distances can accrue as food is transported from production site to depot to supermarket. Centralised distribution in the UK means that food may be transported hundreds of miles to be packaged, only to be returned and consumed within a few miles of its place of origin, ensuring that purchasing food produced locally doesn’t necessarily reduce food miles. Indeed, 82% of vehicle kilometres associated with transporting food consumed in the UK are generated within the UK itself. Therefore, the assumption that domestic products are a green choice may be mistaken.

Moreover, consumer travel to purchase food is often unconsidered by food miles proponents. Preference for large, out-of-town supermarkets results in the average Briton travelling 898 miles annually to shop for food. Gareth Thomas, Minister for Trade and Development, suggests that driving 6.5 miles to buy groceries emits more carbon than flying a pack of Kenyan green beans to UK. This means that regardless of where a product is produced, the purchase also results in considerable distance travelled, again revealing the limitations to the narrow view on food miles.

If food miles are to provide any value for appreciating carbon impact, the method of transportation must be acknowledged. On a mile-by-mile basis, shipping is far less carbon intensive than air freight. Whilst air freight only accounts for 0.1% of food miles, it produces 13% of CO² emissions from food transport, whilst sea freight emissions are only an 80th of those produced by air freight. This demonstrates that a catch-all ‘food miles’ label is too simplistic to determine carbon footprint and thus environmental impact.

Furthermore, environmental impact is about more than how many miles food has travelled to the plate, as transport may only be a small part of CO² emissions. Weber and Matthews suggest that transportation as a whole only accounts for 11% of life-cycle greenhouse gas emissions, whilst production is responsible for 83%. In their study of American households, they concluded that ‘buying local’ would only result in the maximum reduction of 5% of greenhouse gas emissions due to emissions associated with food production. This could include the creation of fertilisers, pesticides and packaging. In their study of the New Zealand-UK lamb trade, Saunders et al. found that per tonne of carcass, including shipping to the UK, lamb produced in New Zealand resulted in 688kg CO², whilst that produced in the UK created 2,849.1kg, as shipping had a negligible impact on overall emissions. Carbon is produced all along the food chain, including at cooking stage. For example, 48% of the energy used during the life cycle of potatoes is expended at cooking stage. Thus, emphasis on food miles ignorantly neglects other carbon contributions from food, further demonstrating that more is needed than a simplistic assessment of distance. Consideration of overall carbon footprint may be more valuable than food miles alone.

Carbon intensity associated with food production is also determined by area suitability. In some cases, producing food elsewhere and transporting it to the UK may result in fewer carbon emissions than when produced domestically. For example, Lincoln University looked at the British-New Zealand dairy industry, discovering that milk produced in the UK creates 35% more emissions per kilogram than that produced in New Zealand and transported to Britain. Likewise, McKie suggests that heating greenhouses and polytunnels for production in the UK, such as for lettuces and tomatoes grown domestically during the winter, means that transporting products from Spain may have a lower carbon impact. Similarly, evidence suggests that it may be more environmentally friendly to produce and transport green beans from Kenya than to grow them domestically. Manual labour instead of machinery and manure instead of artificial fertilisers ensures that although the beans are air freighted, Kenyan production is less carbon intensive than in the UK. Therefore, where a product is grown can significantly influence the carbon impact of food.

Subsequently, perhaps it may be more valuable to reduce carbon emissions from food in ways other than purchasing local produce. Organic goods may have a lower carbon impact, as less energy is needed to manufacture and transport fertilisers ordinarily used in mainstream agriculture. Practical changes, such as eating in a group, can reduce one-off carbon emissions from cooking. Moreover, local can still have some value when seasonal food is purchased. This ensures that the food consumed would not have required the carbon intensive agriculture often ignored by the simplistic pursuit of reducing food miles. Therefore, food miles may have some value when a seasonally-sensitive approach is adopted. However, alternative options to reduce carbon from food consumption demonstrate that food miles are too simplistic for reducing carbon impact.

Therefore, not only is reducing food miles an unrealistic goal, it also appears to be over-simplistic and potentially environmentally ignorant. Whilst it may hold some value in allowing consumers to recognise the carbon impact of everyday consumption, it mistakenly leads to a supposed common-sense belief that local food results in fewer carbon emissions than the same goods produced elsewhere. It instead overlooks the importance of how food is transported, how it is produced and carbon emissions from other aspects of the food chain. Consequently, instead of emphasising food miles, perhaps it is more appropriate to defend distance and develop a more detailed awareness of our carbon footprint.