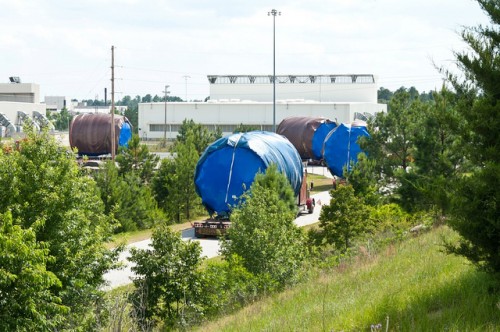 Nuclear Power – The ethics of millennia of containment

Ethics in engineering have perhaps never been as critical as they are now, with the development of ever more powerful and consequential technologies. The proliferation of nuclear power has resulted in a growing quantity of radioactive byproducts. According to the Nuclear Energy Institute (NEI), about 20 metric tonnes of used nuclear fuel waste is produced each year per facility. This waste is categorized as either low-level or high-level depending on its potential for destruction. A large percentage of the low-level waste has a relatively short half-life, and will decay to background radiation levels within 100 years. High-level fuel waste can be present for thousands or millions of years. The half-life of U-235, the fuel most commonly used in the reactors, is 109 years, and the radioactive leftovers are a containment quandary. Various methods for disposal and treatment of nuclear fuel waste are currently implemented, with other proposed methods stalled by international agreements and uncertainty about repercussions. Radioactive isotopes do occur naturally, and evidence has been found of a natural nuclear fission reactor under the Earth’s surface. The difference is the amount of waste which is introduced by man-made production, and the responsibilities of disposing of said waste in a manner which avoids contamination of natural resources and living areas.

The methods currently employed for disposal include above ground containment and burial in excavated mine sites, as well as re-processing for further use. With increased waste production and the extremely long half-lives involved with many of these materials, space for disposal clearly becomes an issue. Furthermore, due to the emission of both heat and radioactivity, containment can be tricky. The waste products tend to corrode the vessels they are held in, and thus multiple layers of protection are necessary, increasing the size and cost of containers. Many current methods employ immersing the radioactive materials in a glass and sugar mixture to lessen the corrosive impacts. A particular method utilized by the Swedes, called KBS-3, involves intermediate storage above ground for observation for 30 years before encasement in iron, then copper, then burial in bentonite clay 500 metres down. After 100,000 years the radioactive levels of the waste should have returned to those at which the Uranium ore was originally mined at. This extremely long “cooling off” period is highly restrictive to land usage for other purposes. Areas designated for such are, in all practicality, dead to all other uses. With an annual worldwide radioactive waste production at nearly 10,000 tonnes (and rising) the feasibility of underground storage is limited. Additionally, consideration of the myriad societal changes which may come about in a period of 100,000 years is very relevant. The opening of a “time capsule” such as this prematurely would be a very unwelcome gift to future generations.

Deep bore-hole deposits, as far as 5km down, and remix and return methods by which spent fuel is combined with Uranium mining and milling tailings to mimic original levels of radioactivity both offer plausible solutions, but also require further reprocessing to remove the plutonium present. High levels of plutonium are of concern as this could be harvested by groups interested in acquiring atomic bomb fuel. Keeping watch on multiple burial sites in remote locations all across the globe could prove to be difficult, much as the post-Soviet nuclear weapon caches have caused much unease in past decades.

Proposals to utilize the subduction properties of the tectonic plate structure of the Earth’s crust have merit, but violate International treaties. As tectonic plates collide, one plate is often subducted, or pushed down into the mantle of the Earth. If radioactive wastes could be introduced to this area, they would be effectively recycled into the core and returned to the natural cycle of the planet. Subduction takes place very slowly, maybe 10 cm a year, thereby making this far from a fast solution. Furthermore, subduction occurs at places where an oceanic plate meets a land-based plate, thus introduction would need to occur at coastal areas, which is where the International treaty complications come into play. The contamination of the planet’s oceans with radioactive materials is indeed a ramification which must be avoided. Similarly, proposals to launch wastes into space meet strong resistance as a catastrophic failure while leaving the atmosphere could result in widespread dissemination of caustic products.

Although radioactive wastes are certainly an undesirable by-product of nuclear power production, other methods of energy production clearly have negative impacts on the planet as well. The ever-increasing carbon footprint of our society has led to an increase in global temperature levels through greenhouse gases. Resources such as coal and oil are needed in far vaster quantities to produce similar amounts of energy. Estimates place the energy which can be produced by one pound of enriched Uranium to be equivalent to that produced by burning approximately a million gallons of gasoline. Whereas all of these resources are indeed limited, the rate at which we are consuming coal and petrol reserves is far higher than that of Uranium. Not only is the usage of these fossil fuels on a much higher scale than that of nuclear fission requirements for Uranium, but one must also consider the energy consumed in extracting and transporting the significantly larger volumes/masses of those fuels.

Although Uranium is the most prevalently used fuel in nuclear reactors today, Thorium is another radioactive element which can be utilized, and is, in India. Thorium is not only more abundant, perhaps as much as three times more so, but when used in reactors a much higher percentage of the fuel is burned up. Traditional Uranium reactors only use maybe 1% of the natural Uranium as it is mined. Enrichment processes convert some of the more widely present U-238 to U-235, and fast breeder reactors can recycle spent fuel rods in a sense extending the viable product and decreasing the amount of contaminant waste. These are just a few of the angles by which increased technology and engineering of nuclear power derivation could lessen the impact on future inhabitants of our planet.

The ethical question posed now is, whether it is appropriate to continue to increase the number of Uranium based power stations at this time, before we have suitable methods for storing the highly caustic by-products. Very similarly, can we stand by and ignore the irreparable harm we pose to impact upon the Earth through other forms of energy production? Obviously the effects of fossil fuel consumption are widely debated (and documented), but with the expansion of alternate forms of energy production other externality effects have come to light. Large wind-farms able to produce relevant power levels create sound pollution and mar the landscape.

The solutions for our growing energy needs must be multi-faceted and comprise levels of thinking beyond the obvious; the ethics of doing any less would be irresponsible. Certainly a legacy of radioactive contamination is not desirable, nor is one of excessive greenhouse gas levels, nor one in which only the affluent are able to enjoy basic standards of living. The most critical element in thinking for engineering the future is foresight. Too many times in the past have seemingly innocuous creations become the bane of genius insight. Too easily does the sentiment of providing for the demand of the present blur the repercussions for future generations. Perhaps the least ethical decision of all would be to abandon any plan without thorough deliberation and consideration, not just for the impact of, but also for the impact of without.