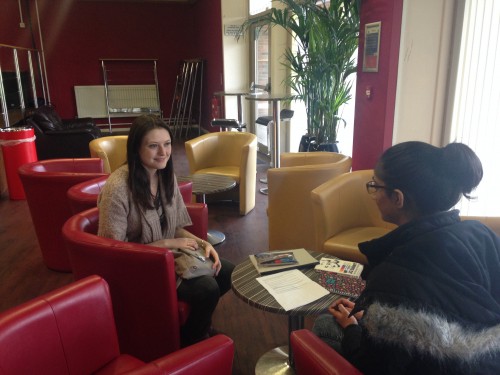 An interview with Lauriane Povey

Butler’s own Lauriane Povey became a published author at the age of 15 with her debut novel Living a Nightmare. She has since published a second book, Veil of Anonymity. The Butler Scholarly Journal met with Lauriane to discuss her writing and her future prospects.

Could you tell us a little about your first two books and their genre? What attracted you to this genre?
My first two books, Living a Nightmare and Veil of Anonymity are young adult novels. Living a Nightmare is about a 13 year old girl who has dreams about the past, present and future and deals with themes such as arson and murder. Veil of Anonymity, my most recent novel, is about cyber bullying. I think, as I was 13 and 14 when I wrote them, it was natural for me to write young adult books.

Do you have a ‘writing process’ – can you tell us a little about it?
I did! I tried to do a certain amount of hours every week, but since I’ve been at university, it has been as and when I have the time! I wrote a bit of the sequel to Living a Nightmare last night. I’m about halfway through so far, so will try and finish it over Christmas – but that’s probably unrealistic.

So you’re working on a sequel at the moment, can you tell us about it?
I can’t really give you too much information about that one because there will be a lot of spoilers if you haven’t read Living a Nightmare! I have got a couple of other books planned. One is about a young adult boy of Pakistani origin whose his parents are linked with a terrorist attack in the UK. So it focuses on how he deals with his religion and whether his parents are guilty.

How much were you involved in the publishing process and the marketing of your books?
I have a brilliant publisher – he does a lot of the editing and all of the publishing and the formatting of the books. He deals with the printer and the press to get them out, so he does everything on the technical side. I do a lot of the marketing myself – online and doing interviews.

With your readership in mind, what are your views about people (especially young people’s) reading habits today? Are we a generation too busy for the novel with our television screens and social media?
I think a lot of young people are under the impression that reading is boring and that books are boring, but I think it is the fault of the English curriculum in schools. The books on the syllabus are not the most interesting. Books that were written a century ago are not really engaging for young people. They should study more young adult authors such as Malorie Blackman and Anthony Horowitz – that will get young people into reading.

Do you anticipate your chosen genre changing as you mature? How?
I think I will always write young adult fiction. I have about 17 books planned at the moment and only one or two of them are of a genre other than young adult.

You have come to Durham University this year to study International Relations, not a creative writing degree. Do you think you might pursue a different kind of career?
I’m interested in working in government. I went to Parliament last week to speak to the education select committee about cyber bullying, based on my book. I think being an author is a dream career, but working in government is probably more realistic.