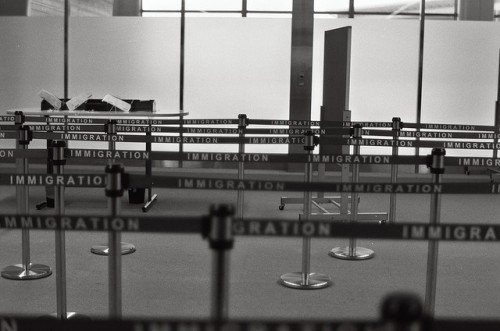 The Economic Case for Open Borders

Ever since the human race evolved in Africa some 200,000 years ago, humans have spread to all corners of the globe in search of better living conditions. This global spread of humanity is what distinguishes humans from most other living species. Of course, it is evident that movement of peoples did not end with complete migration to all parts of the world. Today, humans are tightly packed into a global economy that links all parts of the world through a complex economic and social system in which everyone is dependent on strangers from across the globe. In fact, Canada has even established a new cabinet post, the Minister of Citizenship and Immigration, to increase the number of immigrants by coordinating programs which help immigrants to integrate into Canadian society. Unfortunately, especially within the context of the United Kingdom leading up towards the general election, the British voter still wishes to cling on to his old conservative views and reject the dynamism which, in the words of Adam Smith, the ‘commercial stage of civilisation’ brings upon mankind.

This article intends to bring to light the academic duty of not shying away from the taboo issue of immigration as a perceived threat to a country’s natural right to economic, social and political well-being. In fact, such fear of foreigners is so common it even has a name, xenophobia, which is distinct from racism. Nevertheless, the purpose of this is article is to argue in favour of a classical libertarian policy which augments a complete free movement of labour on the premise that it should only be done in such a way that no immigrant can be entitled to a single penny of the UK’s welfare budget.

Leading up to the election there is clear evidence to support the case that the British electorate display some anti-immigration tendencies. The effects of this are seen in reports such as those published by Dr. Scott Binder within the Migratory Observatory; they reveal that three quarters of voters in Britain currently favour political policies which reduce immigration. The findings report that that 59% of voters feel that immigration has ‘gone too far’, whereas a considerable 77% of voters propose that there should be immigration controls in some way or another.

Instead of eliminating such xenophobic tendencies, mainstream political parties tailor economic scare stories and exploit them in order to boost their election chances to secure a new, or existing, set of keys to Downing Street. Examples of anti-immigration policies as seen in the Tory party pledge that, if elected, they will ‘restrict immigrants’ access to work, and their ability to open up bank accounts.’ The so called ‘social-democratic’ Labour Party have even inscribed their jingoistic policy on a mug reading ‘controls on immigration’ which can be bought for a fiver. Of course, such irrational fears are not new. In Shakespeare’s play Richard II, John of Gaunt revealed similar prejudice in a lyrical fashion by declaring that England is a ‘fortress built by Nature for herself, against infection.’ Infection, in this context, being foreigners. Nevertheless, it is imperative that, as scholars, we put aside these prejudices in order to look at immigration objectively.

The Fiscal Effects of Immigration to the UK, a report conducted by UCL’s Centre for Research and Analysis of Migration, illustrated that ‘immigrants who arrived between 2000 and 2011 from ten central and East European countries paid 12% more money to the public purse in taxes than they received in benefits.’ Furthermore, it also revealed that immigrants made a positive contribution of around £5 billion towards the government Public Sector Net Cash Requirement (PSNCR), and were also better educated than native Brits, with an average of 25% of immigrants having a degree while the UK native average was 24%.

The report also discredited the Prime Minister’s statement that immigration was a ‘constant strain’ on public services by revealing that immigrants from any country who had arrived since 2000 were 43% less likely than ‘natives’ to receive state benefits or tax credits. These immigrants were also 7% less likely to live in social housing. Furthermore, by calculating European immigrants’ share of the cost of government spending and their contribution to government revenues, the scholars estimate that between 1995 and 2011 the migrants made a positive contribution of more than £4 billion ($6.4 billion) to Britain, compared with an overall net loss of £591 billion from native Britons. Other findings go on to illustrate that, even when taking into account rising taxation receipts towards ‘pure public goods’ such as defence spending, the cost of running public services remains the same no matter what the population is. Therefore, the overall cost of providing them to immigrants is zero. It could be calculated that the cost of providing these public services per person leads to a situation where the price of such services for Britons goes down as the number of immigrants rises, since the cost is shared between a larger number of individuals. It makes pure economic sense. Some have claimed, and rightly so, that immigration is also a form of foreign direct investment. Evidently, there is a case to be made which supports the claim that immigration should not be a problem in the way it is perceived to be currently. However, a case can still be made for how existing policies could be improved.

The results of the Fiscal Effects were well-received by hard core socialists or ‘bleeding-heart’ libertarian backbenchers within the Commons who felt that they could breathe a sigh of relief knowing that immigrants had contributed towards reducing the PSNCR deficit. I would argue that such views are damaging. By allowing some immigrants some entitlement to welfare benefits, it is presumed that immigrants will continue to help Britain to achieve the 2025 objective of ‘balancing the books.’ However, to assume that trend will last is an assumption and nothing more.

What policy makers should acknowledge, as Nadhim Zahawi proposed during his debate within the Oxford Union Society, is to create a Britain with no border controls and no state handouts for those who decide to step onto her shores. Milton Friedman, an economist from the Chicago School of Economics, takes a similar position arguing that ‘it is one thing to have free immigration to jobs, and another thing to have free immigration to welfare. You cannot have both.’ By accepting free immigration, everyone benefits: the native consumer, via cheaper services and goods, and the producer, as immigrants are competing to work for even the lowest of wages, thus helping to reduce the firm’s costs. Contrary to popular opinion, it is also clear that illegal immigration improves Britain’s economy. But it is only good as long it is illegal. Why? Because illegal immigrants who step onto our shores do not qualify for welfare, social security, and other sources of welfare benefits at the expense of the tax payer.