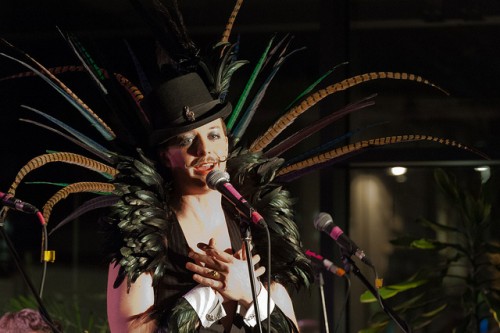 Polari: How Bona to Vada Your Eek!

After the global media caused uproar at the Sochi Olympics regarding Russia’s new legislation condemning non-traditional relationships, almost an echo of the English 1885 Labouchere Amendment, Ireland has become the newest country to vote for the freedom to marry among homosexual couples by a popular vote. Occurring less than a year apart, both events have shown how complex the ongoing debate about the role and the rights of homosexuality is in today’s society. In linguistic terms, however, homosexuality seems to be old news. Deemed an ‘endangered language’ in 2010 by the World Oral Literature Project established between Yale University and the University of Cambridge, Polari is best known as a secretive language that was predominately used in the homosexual and gay communities in Britain, which peaked in the 1950s and slowly started ebbing away towards the end of 1960s.

A purely spoken camp language, Polari was known to an extensive audience, only a short span of decades ago. Ian Hancock suggested in his ‘Shelta and Polari’ article, published in 1979, that more than 15,000 people in England and Wales, and more than 6,000 in Ireland were predisposed to ‘have a corpus of Polari words in their ordinary speech, and who are aware that their use constitutes a secret linguistic register’ (1). That number has lowered significantly as this elusive language started dying out, but some words found their way into widespread use. For example, the word camp itself, as an adjective denoting something ‘to be excessive or showy’ or ‘affecting the mannerisms of the opposite sex’, is still very much in use. The vestigial language of Polari, which found its way into present-day slang – mostly existing alongside Cockney – holds the traces of what can best be described as an anti-language. The term was coined by the linguist Michael Halliday to capture a language developed within a social group to keep oneself and one’s community insulated from the establishment and the law (2). Therefore, it is no surprise that Polari thrived in homosexual and gay communities throughout the nineteenth and first half of the twentieth century.

Etymologically speaking, Polari is a Romance-based language, particularly of Italian origin. Outside of Britain, Polari was known under various names, such as Parlyaree, Parliaree, Parlarie and Parlare – all originating from the Italian word parlare, meaning ‘to speak’. The strongest link of origin is located in a form of Lingua Franca spoken in the major ports along the Mediterranean coast in the times of the Crusades. It has been established that this language was a pidgin language. In other words, it was not native to anybody, meaning that various versions of the language, which reflected the languages of its surroundings, developed freely (3). The spread of Lingua Franca can be traced back to sailors and other seamen of the seventeenth and eighteenth centuries, who came home from the sea and were drawn to the road for a living. They could not adapt to the static ways of livelihood, and preferred to join troupes of players, sideshows and hiring-fairs (4).

Modern Polari, however, does not only contain influences of Italian and Lingua Franca, but also words from Cant, the speech of road people and criminals; backslang, where the order of the letters are reversed; and Cockney. In the books, it was previously officially defined and classified as the ‘dancer’s language’ or linked to ‘showmen and strolling players’ (5), since, as Eric Patridge explained, actors were so despised until the end of the nineteenth century that the usage of Polari words was an act of ‘self-protection’ (6). Even though its link to gay culture was ignored for a long time, this explanation coincides with Peter Burton’s presentation of Polari as ‘a secret language [that was] born out of repression’ (7). Polari only survived because it was handed down from one generation of ‘queens’ to another. As Burton continues: ‘There was something deeply reassuring about [it] – it gave those of us who used it an additional sense of corporate identity’ (8).

Before the Wolfenden Committee in 1957 recommended that consensual homosexual behaviour between men over the age of twenty-one should be decriminalized except in the armed forces, homosexual and gay communities were socially and legally ostracized. The increasing paranoia and fear led men to rely on Polari as a way to recognize a fellow gay man and express an interest. Leslie Cox and Richard Fay therefore justifiably name Polari as one of the predecessors of Gayspeak (9). Polari flourished in the years of Oscar Wilde’s trial for public indecency and the decades that followed. Its downfall, however, was partly caused by the gradual decriminalization of homosexuality with the 1967 Sexual Offences Act, and partly due to the public uncovering of Polari words. Polari’s primary advantage was its anonymity and once it came out of the closet it became known to the mainstream public. The BBC radio comedy sketch show, Round the Horne, was the first to introduce two regular characters, Julian and Sandy, who spoke a version of Polari. Between 1965 and 1968 people were able to hear the show’s avuncular host, Kenneth Horne, visit some new enterprise, which was invariably called Bona something or another: Bona Guest House, Bona Caterers, Bona Ballet. The Bona traders were two flamboyant, out-of-work actors, played by Hugh Paddick and Kenneth Williams who were both gay and therefore able to squeeze the most out of every line (10). Millions tuned in each week.

The following example provided by Burton incorporates what Hancock defines as ‘the Polari items which seem to be the most widely known’ (11):

As feely homies [young men], when we launched ourselves on gay scene, Polari was all the rage. We would zhoosh [fix] our riahs [hair], powder our eeks [faces], climb into our bona [nice] new drag, don our batts [shoes] and troll off [cruise] to some bona bijou [nice, small] bar. In the bar, we would stand around parlyaring [chatting] with our sisters [gay acquaintances], varda [look at] the bona [nice] crates [genitals] on the butch [male] homie [man] ajax [nearby] who, if we fluttered our ogleriahs [eyelashes], might just troll over [wander over] to offer a light (12).

Polari might not serve its original function anymore, but the concept lives on. There are a number of cafes and clubs around Britain that donned the name of Polari; the Round the Horne radio show was reinvented into a stage production called ‘Round the Horne Revisited’; the National Museum in Liverpool is currently holding an exhibition on Polari; and Polari Magazine became the leading online arts and culture magazine for a LGBTQ readership. Most importantly, artists Jez Dolan and Joseph Richardson are launching ‘Polari Mission’ to save the language through a multidisciplinary collaboration between artists and linguists, which aims to produce a series of exhibitions, performances, visual artwork and audience participation.

Taylor, Heather, ‘Polari: A sociohistorical study of the life and decline of a secret language’ (unpublished undergraduate dissertation The University of Manchester, 2007), last accessed 2 June, 2015