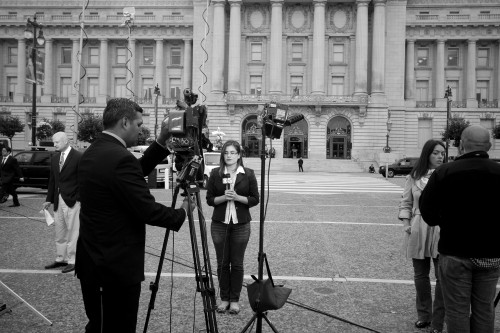 As part of the college’s Butler Talks, ITV correspondent Helen Ford visited the college in early November. ITV regularly holds their diversity panel, run by Helen, which is made up of members of the public and Josephine Butler students. Thus, the topic of representing diversity in television formed the majority of the talk.

After a small drinks reception in the SCR, students and staff were led to the seminar room for Helen’s fascinating talk. The discussion highlighted the potential difficulties and possible solutions when attempting to fairly depict diversity in television. The attempt to show diversity in news reports seemed to largely stem from the desire to truthfully represent the community Helen was discussing in her stories; however, it very quickly became clear that this is not an easy thing to do. If the story involves interviewing on scene, the time and location of the report can become instrumental in deciding who will be available for interview. Interviewing in a coffee shop in the middle of the afternoon would give a reporter a very different demographic compared to interviewing around a train station near rush hour. Whilst the community may display ethnic diversity, the location could limit who is present at that moment for the story. This appeared to be particularly important for live reports, where time is very limited and controlled. Thus, Helen stressed that although it may be very difficult, nigh impossible, to represent everyone in every story, it is important that the channel as a whole represents the diversity of the local area. To do this, a variety of different locations at different times can be used for interview over a period of time in an attempt to truthfully represent the people the channel is reporting on.

Similarly, the interviewing of experts, whether on the scene or in the studio can pose difficulties in representing diversity. In some fields there may be more men than women, or vice versa, or simply a very small pool of people to choose from, thus limiting who could feasibly be interviewed. Yet, this could of course lead to a sort of positive discrimination, whereby a person is chosen simply because they represent a minority or diversity, without the person actually having the necessary expertise to discuss the topic. Thus, Helen went on to explain how important it was to choose the right person to be interviewed, taking into account all the different dynamics, including their expertise.

Perhaps the most memorable section of the talk was when Helen recounted part of the discussion from the ITV diversity conference in London, where a disabled member of the public noted that the disabled were regularly only interviewed if the news story was about disability. This may seem partially obvious; of course when the story concerns a group of people that group should be interviewed. Yet perhaps, what we may not have thought about is that this should not be exclusive; the same group of people could also be interviewed for many other stories as some news reports can potentially concern everyone. As evidence of this in practice, Helen showed a news report she had done on the recent election. The report was during the run up to the election and interviewed a family to discuss what they were looking for in political parties. The report focussed on a family of ethnic minority, yet this did not feature in the report itself, as the family were discussing their practical needs without a focus on their background.

The talk was therefore particularly interesting in that it highlighted the practical difficulties of representing diversity even when the reporters and channel wish to do so, something which many may not realise when witnessing the demographic represented on their screens. Moreover, it also emphasised the need to focus on diversity without doing so in a particularly obvious manner. It is likely that those who represent the diverse nature of society do not want to be singled out as such, adding to what could already be an existing cultural separation. Therefore, Helen’s talk focussed especially on the need for acceptance and respect when dealing with the difficulties facing ITV and other news channels whilst attempting to truthfully represent the diverse nature of their local area.