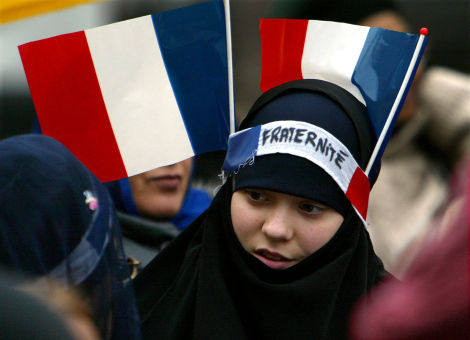 France is still reeling from the horrendous attacks on its capital which left 130 dead. It asks itself: why us? While Islamist terrorism is a much worse scourge in countries across Africa, the Middle East and Asia, in our Western bubble it is France that has suffered most: from Mohammed Merah’s murderous rampage in Toulouse and Montauban in 2012, to the Charlie Hebdo attacks at the beginning of this year, to the recent massacre in Paris. Meanwhile, a report by the French Senate in April estimated that of the 3000 plus Europeans who have left to fight for ISIS, at least 1430 were French.

It is often said that France assimilates immigrants into one unified French culture, avoiding multiculturalism and ensuring that everybody shares the same values of liberté, égalité and fraternité. That is more the aim than the reality. The word that sums up France’s historic attitude towards Muslim immigrants is blindness: both in the secular sense of not recognising citizens by their religion, but also not recognising and dealing with the social problems and tensions in neglected banlieues where many have found themselves.

Northern African immigrants arrived in large numbers in the latter half of the 20th century. Up until the late 1980s, there was a prevailing laissez-faire attitude from the French state. It was left to Islamic states to look after their religious needs, and it was assumed that they would naturally integrate into society. As well as North African and Turkish influences on Islam in France, radical Saudi Wahhabism has also taken root.

A critical year was 1989. This was when the Ayatollah Khomeini issued a fatwa against Salman Rushdie for his book The Satanic Verses, whose publication was marked by protests across the Muslim world. 1989 was also the year of the first affaire du foulard in France; three girls refused to take off their Islamic headscarves at school and were suspended in a case that went to the Supreme Court. This caused much national angst about religion in the public sphere; a debate which recurs sporadically and particularly in relation to the dress habits of Muslim women.

The outskirts of large cities where many descendants of North African immigrants live have traditionally suffered from police brutality, low job opportunities and an overwhelming sense of rejection, as was depicted in the award-winning film La Haine. There have been periodic riots in these areas, such as those in 2005, when the death of two teenagers chased by police into an electric-power substation triggered almost three weeks of rioting across the country. Nicolas Sarkozy, Interior Minister at the time, called the rioters “racaille” (scum): an inflammatory word which only increased the sense of separation between the disaffected youth and the general public.

Formal efforts to incorporate Muslims into society have not fared well. The French Council of the Muslim Faith, set up by Sarkozy to provide representation for Muslims for matters affecting them, has largely been seen as elitist and unrepresentative. It has been criticised for two contradictory reasons: on the one hand for opposing the principle of secularism in France by dealing with citizens according to their religion; and on the other for not being effective enough.

The aftermath of the attacks in Paris has seen demonstrations of public solidarity in France and all over the world, for instance graffiti artists painted Paris’ motto Fluctuat nec mergitur (beaten by the waves but not sunk) at Place de la République. Yet there is a lingering sense that all this is papering over the cracks – mainstream cohesion masking difficult tensions at the edges.

After the attacks in January, there were reports of Muslim schoolchildren refusing to respect the nationwide period of silence. Dieudonné M’Bala M’Bala, a well-known comedian, wrote on Facebook “je me sens Charlie Coulibaly”, an amalgamation of Charlie Hebdo with the terrorist Ahmed Coulibaly. As for the far-right, the organisers banned Marine Le Pen of the National Front from participating in the march in Paris after the Charlie Hebdo attack, and her father and founder of the party, Jean-Marie, said “je suis Charlie Martel,” in reference to an 8th century ruler of Francia who defeated Muslims in the Battle of Tours, thus supposedly saving Christian Europe.

This time around, some think there will be an increase in support for the National Front, as Marine Le Pen has blamed the attacks on the government’s “crazy, undiscerning immigration policy” and said it was “more than just responsible” for the attacks. Meanwhile, anti-Semitic incidents increased by 84% from January to May compared to the previous year, and Jews have been leaving in increasing numbers to Israel.

A recent book that has taken the literary market by storm, Submission by Michel Houellebecq, imagines seven years into the future. It envisions Islamists taking power in France, not through violent attacks, but because of voters’ general apathy, lack of faith in liberal values and fear of the powerful National Front. Violence spreads between racist ‘nativists’ and Islamists, and Jews leave the country in fear. While the book’s power comes from its satire rather than its prediction abilities, events like those in Paris give it an eerily realist tone.