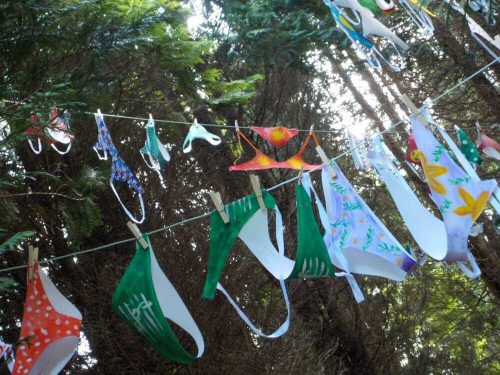 Interview With An Artist: Alan O’Cain

During the 2015-2016 academic year Alan O’Cain has been the artist/writer-in-residence shared between Josephine Butler College and St. Cuthbert’s Society. In this interview with Kiran Kaur he discusses ‘The Bikini Line’, an art installation created in collaboration with students, staff and SCRs from both colleges and situated in Durham Botanic Garden from 16th June to 25th July 2016.

KK: What is the nature of the installation and what inspired it?

AO: In 1946 a total of 167 inhabitants of Bikini Atoll in the Pacific Marshall Islands were relocated by the US Government in order to carry out nuclear bomb testing in the area. A series of twenty-three nuclear devices were detonated over a twelve-year period. The reef was contaminated beyond safety and only recently have a few intrepid diving companies established businesses on the atoll. The Bikinians and their descendants hope one day to be repatriated. Also in 1946 a new swimwear garment hit the fashion scene. The press was quick to make connections and give a nickname to the revealing two-piece garment and its “explosive” effect on the public. They named it the “bikini”.

Since 2008 I have been anticipating this double Anniversary and hoping to create an artwork juxtaposing some of the serious questions raised, not least the topical issues of forced migrations and environmental regeneration, with the colourful and (some might say) frivolous world of swimwear fashion. I wanted to maximise the opportunity for collaboration, and to create something that would take student involvement beyond the confines of the college into a public-facing world. I decided the ideal format was ‘installation’.

In March 2016 I approached Mike Hughes, Head Gardener at Durham Botanic Garden, and floated the idea. Mike immediately embraced the concept. We would set up the installation in the centre of the garden, hidden in a shady and atmospheric conifer glade. The focal piece would be a beaten-up and abandoned washing machine, slumped on a mock tropical beach, around it seventy individually designed bikinis on washing lines or strewn in the trees. A further element would be sound: the eerie noise of the washing machine still running. Student Support Officer at Josephine Butler Neil Crimes, a Music graduate, collaborated and created the recorded soundscape. Students, SCR members and local schoolchildren created the painted paper bikinis.

KK: Why do you think art is a useful means of engaging with historical trauma?

AO: This installation is in a public place. The Garden is visited by a wide range of people, including family groups. I am interested to create work that tells a story and can be accessible to all. The kind of narrative that interests me involves explorations of individuals or groups in moments of crisis, but I do not seek to make my audience uncomfortable. I attempt to maintain balance through explorations of the absurd and allegorical hints at the triumph of hope. Often this involves a compositional expression of harmony amidst chaos and threads of what is commonly called ‘black humour’. As for the usefulness of such art: it is useful if visitors are inspired to reflect on the story being presented, discover narrative or aesthetic meanings for themselves or if they find themselves simply surprised or entertained.

KK: The installation addresses many issues and debates; would you say that art is best served when it is socially engaged?

I believe art can come in many guises. Some art is socially engaged, other art is entirely centred on aesthetic or emotional impact. The kind of art that excites me is a mixture of all of these. ‘The Bikini Line’ references historical events, and invites debate about land ownership, movement of peoples and environmental issues. But it also stands as an aesthetic presentation of multisensory elements. First and foremost the work is a sculpture. I am interested in the contrast between shapes, colours and textures. I am also interested in the immersive quality of the work: it is a sculpture that can be entered. Secondly the installation is a work of theatre. The sound element has a specific duration. The route to and from the installation is a journey; the pieces of the story are presented in a deliberately calculated and physically encountered sequence.

KK: Your project draws on both visual and aural components; what do you hope spectators will draw from the synaesthetic experience you have created?

AO: I hope the combination of sound and vision will enhance the meditative quality of experiencing the work. Also, I am attracted to the poignancy of the sound of a crushed machine still working. I give voice to my expressionist leanings: my aim is to invite my audience to share my personal emotional responses through shaping those responses into immediately accessible visual and aural representations. I have no desire to cloak meaning or effect in obtuse or esoteric symbolism. If visitors leave the installation with a heightened sense of experiencing the world, even momentarily, I am happy.