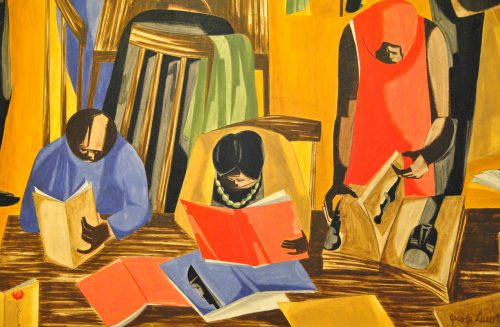 The Harlem Renaissance poets and identity

The Harlem Renaissance was a time of flourishing cultural, artistic and social development in Harlem, New York, during the 1920s. The neighbourhood of Harlem was claimed to encapsulate a productive sense of living together and creativity.

There is some confusion about a clear definition for the movement as it derived from overlapping phenomena. The term ‘Negro Renaissance’ arose in the early to mid-1920s to signify a general cultural awakening and moment of recognition.[1] However, there is a distinction between the sense of a ‘Black Renaissance’ and ‘Harlem Vogue’: the emancipation and revolution of black creativity versus the interest of white Americans of the time in black arts and culture.

Langston Hughes, a prominent writer of the era, ‘did not collapse what he termed the ‘Black Renaissance’ into the Harlem Vogue.’ [2] Whilst there were Broadway shows featuring talented black performers, and black nightlife entertainment during the Prohibition[3], this was merely a hint of the breakthrough of black artists and writers that was to come, where art would be created to deliver an authentic voice and representation of black American life.

Langston Hughes’ I, Too is a poem structured at the beginning and ending with single lines ‘I, too, sing America.’/‘I, too, am America’. The content of the main body includes contrasting second and third stanzas: ‘They send me to eat in the kitchen…when company comes’, ‘Tomorrow; /I’ll be at the table…When company comes.’ Hughes is noted to have wanted to escape the lie of, as well as claim, Americanness. This poem signifies a shift in personal perspective and control over ones’ actions and identity. Through exercising choice, ‘I sing’, ‘I’ll be’, the speaker stakes a claim to being American. There’s a push for the right to be recognised as equal, rather than being hidden away from the ‘company’ of the world. The poem is defiant. It says I, we; as human beings, matter, and should be celebrated. This message remains powerful for readers now, particularly as we study Langston at a time of political change in the US and with the recent backdrop of the Black Lives Matter movement.

Countee Cullen, another leading figure in the Harlem Renaissance, demanded that the black poets be respected as American poets, and is also noted to have ‘felt a responsibility to write about being black even if he did so outside of black folk traditions’.[4] In Cullen’s Yet Do I Marvel, the speaker writes ‘To struggle up a never-ending stair.’ Cullen’s poetry here suggests a continuing plight, a defiant ascension of Harlem Renaissance poets’ creativity, individualism, social awareness and pride in the face of adversity.

Women writers and poets also played a significant role in the Harlem Renaissance. Jessie Redmon Fauset, a writer and educator, was the literary editor for The Crisis; the official magazine of the National Association for the Advancement of Colored People (NAACP), between 1919 and 1926. Whilst supporting the work of other black artists, Fauset also wrote poetry of her own. Her poem Oblivion reads ‘But I should like to sleep in some neglected spot/Unknown to everyone, but every one forgot’/ ‘There I should lie annihilate and my dead heart bless/Oblivion—the shroud and envelope of happiness.’

The poem’s language has connotations of escapism and hiding, a freedom in anonymity. The title choice of the poem is poignant. As well as having the meaning of being unconscious of one’s own surroundings, ‘Oblivion’ has historical meaning in law of a pardon for political offences. Perhaps the speaker of the poem presents a sense of a yearning to be permitted to be who they are, without judgement, and without their self-expression being necessarily considered a political act. The speaker wants to be, without having to fight for that right. Fauset perhaps toys with the idea of it being a socio-political act to decide to publish writing not only as a black poet in 1920s America, but also as a woman.

The sense of a disguised political nature to poetry can be linked to commentary in the documentary film Looking for Langston, which focuses on the homosexual allusions of Langston Hughes’ work. The Harlem Renaissance poets were said to have ‘broke rules by writing at all, they broke the terms they’d set for themselves and others had set for them’.[5] Faucet’s poetry indicates a determination to create identity by breaking out of a political context, to be defined by one’s own words, not by what society tells you or judges you to be. ‘Oblivion-the shroud and envelope of happiness’ is an intellectual and celebratory haven of peace and authenticity. The use of ‘shroud’ and ‘envelope’ suggests a sense of respect, security, and preciousness. The oblivion the speaker imagines is a safe space where there can be expression without fear that their identity makes them vulnerable.

Although Harlem became a cultural capital for African Americans during the 1920s, many female writers of the time were not located there.[6] For example, Heritage by Gwendolyn Bennet, was published in Opportunity (a magazine she would later be assistant editor for), when she was still studying at Howard College (where she would return to teach). The last stanza of Heritage reads ‘I want to feel the surging /Of my sad people’s soul’. The voice of the poem calls for emancipation of voice and identity. A powerful self is encouraged. Bennet’s poetry is direct in the way it is emotionally charged. In Sonnet 2 the voice says ‘But dearer than all surmise/Are sudden tear-drops in your eyes.’ Truth and tears in this poetry point to the poet’s concern with a message of working through hardship to defiantly express identity.

Audre Lorde wrote that the function of poetry ultimately comes down to making yourself and the people who can share it with you, in some way, ‘more themselves’.[7] The Harlem Renaissance poets’ work is deeply moving and allows for reflection on personal and social identity. Instead of being the ‘other’ in an America where segregation was still ongoing, the poets’ work brings black American life to the forefront. Their voices are clear and they are powerful.

The Harlem Renaissance poets were processing, creating, and sculpting an identity for themselves and for their peers to relate to and contrast.  They weren’t discovering essences of self by mediating on their context. They were breaking boundaries, reclaiming cultural history, and encouraging a reassessment of what it was to be a contemporary black American; refusing to accept white historical presentations of black individuals.

The Harlem Renaissance poets created a space for the African American voice. The ground-breaking, thought provoking work has a social function, celebrating and showing the talents of black writers, and paving the way for future possibilities.