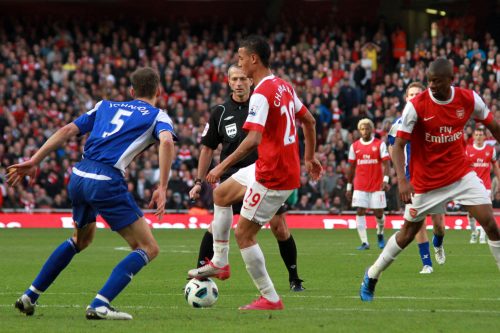 Identity Violence and Discrimination in Football: A Social Media Problem?

During the time that it has taken you to reach this stage of the article, you might otherwise have used those valuable seconds to send a ‘tweet’, post a picture on Instagram, or ‘react’ to a video showing two well-known footballers enjoying a rather questionable handshake celebration on Facebook. However, while you may have spent your time doing that, the chances are that others were abusing theirs, instead directing a snide and offensive comment towards another individual, purely because of their beliefs, the colour of their skin, or the place they call home.

For the younger of the ‘millennials’ or ‘Generation Ys’, a life without social media may seem as obscure as having to complete that physically arduous task of walking over to the television and pressing the ‘on’ button. However, we need only go as far back as the turn of the 21st century to see that this somewhat revolutionary platform of communication has not always been as prevalent as it is in our lives today.

The likes of MySpace and LinkedIn only came to prominence in the early 2000s, YouTube was made to wait until 2005, while Facebook and Twitter were still another year away from becoming globally accessible at that stage.

Add to those the likes of Instagram (2010) and Snapchat (2011), and there are now a phenomenal 2.51 billion social media users worldwide, a figure that is estimated to grow yet further in the years to come, with 2.95 billion expected to utilise such forms of communication by 2020 (Statista, 2017).

Nevertheless, along with the obvious benefits of this social media evolution, there of course exist a number of downsides as well. Including negative effects on health (Hawn, 2009), dangers to one’s privacy (Fuchs, 2014), and, of specific interest to this particular piece, the potential uses and abuses (e.g., Shelke and Badiye, 2013).

Identity violence and discrimination in sport: not a new problem

Though we like to think of sport as some form of immense utopia, a ‘different world’ to which we can turn and forget about the struggles that life continues to throw at us, such an imagined paradise is of course, merely hypothetical.

In fact, sport can lead many to experience quite the opposite, and it is the unfortunate case that discrimination in this field is by no means a new phenomenon; athletes, supporters and those around them have been subject to such evils since at least as far back as the nineteenth century (Betts, 1974). And while social media may have escalated such issues, it is important to note that it did not create them.

Turn our attentions to football and more specifically to the ‘beautiful game’ in both Southern Europe as well as on our own shores, and we can see clear evidence of identity violence and/ or discrimination.

On the continent, former AC Milan player Kevin Prince-Boateng was forced to kick a ball into the crowd, remove his shirt, and leave the field when subjected to racial abuse during a friendly match for the Italian giants in 2013. More worrying still, Justin Fashanu – the first professional footballer to openly announce that he was gay – decided to take his life in 1998 after receiving endless homophobic abuse from teammates, coaches and supporters throughout a career that spanned 350 appearances and 22 different clubs.

Meanwhile such abuse has even played out in this season’s FA Cup, with Millwall facing investigation after their supporters chanted “DVD” and “he’s selling three for a fiver” at Tottenham Hotspur star Son Heung-min, a deliberate reference to the stereotype of Asians selling pirated DVDs at cut-rate prices. In response, Spurs fans were alleged to have directed chants of “no noise from the pikey boys” towards the visiting supporters.

While it is necessary to note that this type of abuse has existed throughout the history of sport, there is no doubt that the prevalence of social media and all of its anonymity has provided a brand new issue for those fighting against one of sport’s enduring evils.

A new challenge for anti-discrimination in sport

While social media can serve as an effective platform for the reporting of incidents of discrimination in sport, it also allows users to voice their abuse quite literally at the click of a button, and this can be done whether at a match or in the comfort of one’s own home.

Further, the plethora of platforms that are available for one to voice such senseless opinions are evidently leading to an increasing number of incidents of discrimination, with anti-discrimination campaign group Kick It Out (2015a), reporting a 38% increase in abusive comments from the 2013/14 to 2014/15 English football league season – 42% of which came directly from social media.

While some might argue that this new form of discrimination does less harm than verbal abuse that is directed at an individual in person, the exact opposite can be posited, as these new platforms have resulted in a heightening of abuse suffered by those in the spotlight. A trend set to continue in the coming years.

For example, Kick It Out (2015b) found that former Liverpool striker Mario Balotelli was subjected to 8,000 discriminatory posts between August 2013 and March 2015 – 52% of which were racially motivated – whilst over 60% of posts targeting England and Liverpool forward Daniel Sturridge questioned his sexual orientation.

With 51% of reported incidents from social media leading to action being taken against the offenders, it is clear that steps are being made in the right direction. Nevertheless, as these platforms of communication continue to attract a proportion of users for the wrong reasons, it is evident that policing such issues will need to “concern enough of the right people, with power to effect radical change, in the ‘mainstream’ itself” (Lindsey, 29 March 1998, cited in Boyle and Haynes, 2000:126) if more is to be done about these disturbing and yet increasingly prevalent forms of abuse.

Kick It Out (2015a) Kick It Out Reporting Statistics, Available online: http://www.kickitout.org/wp-content/uploads/2015/09/Kick-It-Out-Reporting-Statistics.pdf

Kick It Out (2015b) Kick It Out unveils findings of research into football-related hate crime on social media, Available online: http://www.kickitout.org/news/kick-it-out-unveils-findings-of-research-into-football-related-hate-crime-on-social-media/#.WMj3CeRvgdU