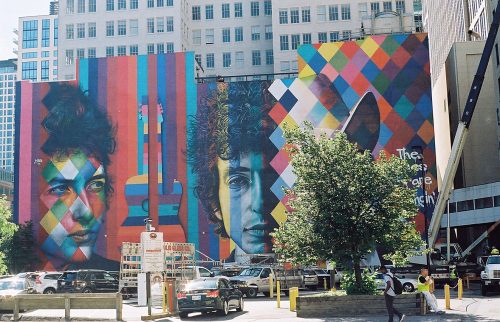 Bob Dylan-Voice of his Generation and Late-Modernist Alien

Although Bob Dylan is more often discussed as a musician, as the ‘song and dance man’ he once described himself as [1], his 2016 Nobel Prize Award draws attention to the literary qualities of his work. From the first publishing of his complete lyrics in The Lyrics 1961-2012 in 2016 to Christopher Ricks’ colossal book of criticism on Bob Dylan as lyricist, Dylan’s Visions of Sin, growing interest in his songs as forms of literature has brought both fruitful insights and a lot of confusion as to the status due this ambivalent figure. This article is not an attempt to classify Bob Dylan as author or folk musician, poet or painter, but rather to examine the possible reconciliation of these two sides of Bob Dylan: the political singer, ‘voice of his generation’ and popular figure on the one hand; the anachronistic modernist artist, on the other. Looking at his 1975 song Tangled Up in Blue, I will analyse how the modernist and postmodernist elements tie in with the folk song tradition and with Bob Dylan’s lyrical idiosyncrasies, putting into question his status as the true ‘voice of his generation’.

Popularized in his 1975 album Blood on the Tracks, Tangled Up in Blue presents itself as a narrative folk ballad in the style of Joan Baez’s The Night They Drove Old Dixie Down or of Paul Simon’s Duncan. What Dylan keeps of the folk tradition however (un-selfconscious rhymes, a repetitive melodic line, a casual, storytelling voice), he challenges with typical modernist devices. For one, the song seems to refuse any form of linearity; it jumps abruptly from ‘early one morning’ the sun was shinin’ / I was layin’ in bed’ to ‘I was standin’ on the side of the road/ rain fallin’ on my shoes’. The two images follow each other without transition, as though in impressionistic rendition of the workings of the speaker’s memory. The timeline of the encounter with the ‘she’ of the story is just as elusive; the narrator seems to meet her for the first time twice, once when she is ‘soon to be divorced’, and another time as she is ‘workin’ in a topless bar’. The strength of the impression produced by the woman seems more important than the story of their relationship, and this precedence is expressed in the blurring of the lines between past and present; as an almost mystical figure, she is more constant than the passing of time itself. In the song, and in classic modernist fashion, Dylan abandons a conventional timeline in favour of ‘psychological time’, which seems at once disordered, cyclical and timeless.

The subjective treatment of experience throughout the song is also a strong echo note to the early 20th century artistic movement; the main woman is presented from different points of views at different times, as her role to the narrator changes, she is in turns a lover, a muse, a savior.  But the song also reflects more directly on the issues of clashing perspectives with its conclusion ‘we always did feel the same we just saw it from a different point of view’. The last of the song’s persistent rhymes in (u:) is between ‘blue’ and ‘point of view’, echoing the two central themes of the song: sadness and longing on the one side; the struggles of intersubjective experience on the other.

Perhaps these deviations from American folk tradition alone however, do not justify aligning Dylan with the modernists of the previous generation. But if we (the general public, but also critics, scholars and musicians) are so inclined to liken Bob Dylan to literature, as his recent Nobel prize award demonstrates, it may be due largely to the singer’s own efforts to bring the literary world into his songs. His allusion to Dante in the second verse of the song:

This propounds the literary as a key element of the narrator’s experience. From then on, Dylan’s playful devices, in his treatment of time and persona for example, become more than simple innovations on the traditional folk song pattern, but can be attached to another tradition, namely literary modernism.

Tangled up in Blue, for all its anachronistic stylistic experimentations can also be considered a song of its times. It is a song of the city and addresses the urban energy of the 1960s student and artist revolutionary class; ‘there was music in the cafés at night/ And revolution in the air’. The mix of low and high genres that is constantly found in the song is also more distinctly postmodern than modernist. Dylan mixes together allusions to Dante with ‘hick’ grammar and diction: the perhaps elitist ‘book of poems’ stands alongside expressions like ‘I got to get to her somehow’. Some elements of the song moreover, are neither traditional nor modernist or post-modernist but rather distinctly Dylanesque; the tone of the song is jocular and the song includes typical mischievous double-entendre like the final ‘heading for another joint’, as well as seemingly gratuitous rhymes ‘a bird that flew’, ‘on the avenue’ ‘ and ‘blue’; and a heady harmonica melody which seems to bring a sense of coherence to the chaos of the song’s lyrics. The song then has elements of the modernist, of the contemporary or postmodern, of the timeless and of Dylan’s inimitable style, all in one.

Precisely because of the song’s abilities to be both ‘of its time’ and ‘timeless’ or ‘out of time’, it may shed some light on the perennial question of Dylan’s unsure status as a ‘voice of his generation’. Dylan ambiguously embraced and rejected his role of political figure; he played protest songs at the 1963 March on Washington, a central event for the 1960s generation of civil rights and civil liberties activists, but later refuses to accept the title of ‘voice of his generation’[2]. Although some of his songs have a clear political message; ‘you who build all the bombs/ (…) all the money you made/ will never buy back your souls’[3], most of his lyrics err on the personal or even mystical side ‘she says there’s no success like failure/ and that failure’s no success at all’[4]. In Tangled Up in Blue, like in so many of his songs, Dylan speaks for his generations in only small, fragmentary ways (perhaps just with the mixing of high and low genres) and is mainly idiosyncratic, deeply personal and even estranged from his time (with the literary modernist elements). In that sense, Dylan may be likened to artists like Picasso who may have achieved fame partly because of their claim to speak for the people on some political platform (as in his 1937 painting Guernica) but also trace for themselves a radically individual trajectory, creating new paths and visions which can never be limited by the expectations of the audience.

In Tangled Up in Blue Bob Dylan is a folk singer, a hurt husband, an anachronistic modernist literary figure, a postmodern musician, a white man in white face wearing feathers and kohl, an unclassifiable man of his time and a man forever out of time. This song exposes Dylan’s fascinating ability to be both topical and timeless, or even anachronistic. And if he manages to rise to the level of literary excellence, it is also because his songs tow that precious line between the universal and the personal, because they both speak for their times and assert complete freedom from the pressures of their times.

[1] In a 1965 press conference, when asked ‘Do you think of yourself primarily as a singer or a poet?’, Dylan replies: ‘Oh, I think of myself more as a song and dance man, y’know.’

[2] For example in his October 2004 interview with Steve Inskeep on Morning Edition.