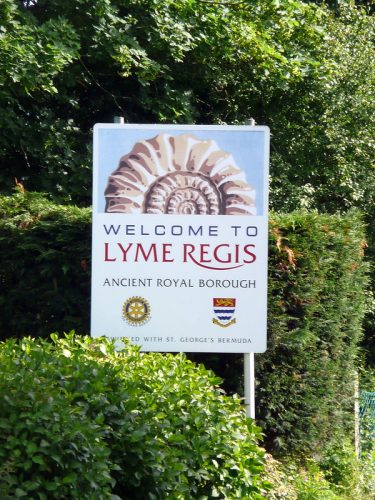 ‘The Power of Human Activity in Shaping English Place Names’

The complexity of the origin of the English language has led to vast variations in the backgrounds of place names on a national scale. As a consequence of the immeasurable influences from a plethora of exogenous forces, place names stem from a variety of geneses, of which will be explored.

The influence of the monarchy and royalty on English place names has undeniably been vast. Primarily, it seems plausible to focus on the addition of ‘Regis’ to the names of English towns. Stemming from the Latin for ‘of the King’, this term signifies the historical presence of royal manors or lands in the region. Lyme Regis, located on the South-West coast of England, is likely to have been granted its royal name from initial royal connections after Cenwalh, the King of the West Saxons, helped found the local Sherborne Abbey. Indeed, this important abbey historically owned a significant part of the town.[1] It is arguable that it is a consequence of the royal connections and monetary input which led to the advancement of their port. The eventual royal charter granted by Edward in 1284 gave testimony to the longstanding royal influence in the region.

Some English locations have even more explicit royal connections in their names, such as Royal Leamington Spa. The town was granted the Royal prefix in 1838 by Queen Victoria, yet in reality there has been little royal association, except her own visit to the town in 1830. This town shows the interconnectedness between human activities and geography; the presence of springs led to the construction of baths, which contributed to its eventual name. Moreover, the establishment of the Royal Pump Room and Baths in 1814 has undeniably moulded the history of the town, thereby supporting its modern name.

Furthermore, beyond royal activities, English place names have often been shaped by religious factors. The vast religious beliefs and traditions have led to a plethora of place names, namely after places of worship. Bonchurch, located on the Isle of Wight, has inherently been shaped by religion. Indeed, Old St Boniface Church in the village today is likely to have been inspired by the visiting of St Boniface, a Saxon patron saint. The first half of the name, therefore, originates from this religious figure, whilst the ‘church’ is suggestive of the importance of the place of worship in the community. Interestingly, in the Doomsday Book, the village was referred to as ‘Bonecerce’, referring to the Anglo-Saxon for church. The historic faith of its inhabitants prevails in such a religion-centred name. It is particularly noteworthy that the name has slowly changed over time through Modern English influences, but this is not always the case. Ormskirk, in Lancashire, has maintained its roots of the Old Norse language. The Old Norse word which referred to church was ‘kirkja’, and thus this has directly shaped the name of the market-town. Religion has once more influenced this place name, yet it certainly presents a conundrum as to how it has resisted change to its name.

Alongside conventional places of worship, religious figures have equally had a profound impact upon individual place names on a national scale. Namely, the role of saints has been most prevalent in influencing names. St Albans explicitly refers to the first British Saint, martyred in the geographical location of the town today in 209 AD. The development of the name, elaborating from Sancte Albanes Stow in 1007, to Villa Sancti Albani less than 100 years later, shows the extreme impact that his death had on the local community.[3] Whilst some historians have doubted the historical accuracy of St Alban, the place name is further accentuated by the church named after the British saint. [4] Religious history cannot be ignored when determining the significance of place names.

Partially connected to the former motif, people outside of religion, and their subsequent actions and activities, can have a similar vast impact upon the characteristics of a place’s name. Telford, a new town located in Shropshire, is named after Scottish engineer Thomas Telford. Indeed, it was commonly believed that Telford’s ‘genius lay in building and engineering’, of which he demonstrated as Surveyor for the county of Shropshire. [5] It was such building of canal-routes, roads and other engineering feats which ensured his place in history in this new town. Furthermore, amongst his actions as surveyor in Shropshire, Telford built his first of 40 bridges in 1790, alongside his role in the construction of the Ellesmere Canal, and eventually the Shrewsbury Canal.[6] The activities of Telford clearly stigmatized a growth of industry in the area, and thus the town payed homage to his role in the naming of it. Telford exemplifies how human construction cannot only shape the nature of a place, but also influence the name.

Yet, beyond engineering feats, other human influences may be as simple as whomever founded the town or city. Wolverhampton was named after Lady Wulfruna, who founded the city in 985 AD, following her acceptance of the local manor house.[7] Indeed, as Wulfruna founded a minister church, it was her expansionist approach which led to the settlement’s growth to become Wulfruna’s Heaton, which signifies the location in which she built the church. Yet, it is not only older place names which have been affected by human influence. The small town of Peterlee, in County Durham, was aptly named after the miner leader Peter Lee.[8] The influence of mining in this county had been so vast that the rural district councillor found it only fitting to recognise the work of such a dedicated worker. Whilst this town is not in complete isolation by honouring the work of people, it is conversely unique in its name formation after the Second World War.

It is, therefore, most apparent that the role in the activities of humans was essential in the formation of innumerable settlements on a nation-wide scale. It was not only nobility or religious figures who could influence place names, yet instead people from a spectrum of different backgrounds could enhance their legacy. Isaac Taylor once suggested that English place names “are never mere arbitrary sounds, devoid of meaning”, and this the essence of what has discovered in this article. Indeed, far from being simplistic names, each individual place has a rich history, which is conveyed in the multifaceted meanings beyond their names. They give a rich ‘insight into its history or religion’ and often offer an opportunity to determine exogenous influence on the region.[9] Whether they originate from Old Norse, French or any period of English, place names instantaneously allow for a vivid elucidation on previous conquest in places.

[5] Samuel Smiles., ‘SURVEYOR FOR THE COUNTY OF SALOP’, In The Life of Thomas Telford, Civil Engineer: With an Introductory History of Roads and Travelling in Great Britain (Cambridge Library Collection (2014), p. 131-144.