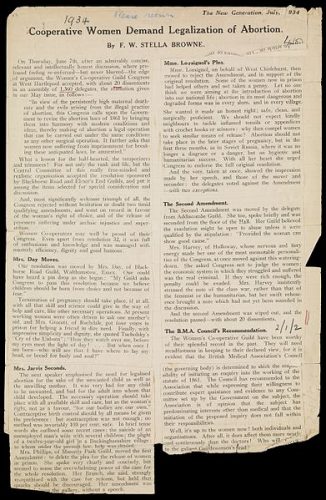 Stella Browne was a socialist sex reformer during the interwar period. Raised in a middle-class home by her widowed mother, Browne went on to study at Somerville College, Oxford; the place where she encountered ideas of socialism and feminism.[1] Not only was Browne a prolific writer on matters of sexual politics, but she was an active member of the birth control movement, the Abortion Law Reform Association, the Humanitarian League and the Divorce Law Reform Union, amongst others.[2] Stella Browne has often taken a marginal position within the history of interwar sex reformers. She also never established herself as a prominent figure in popular culture during the interwar period. Furthermore, there is a lack of archival material on Browne; some of her writings no longer exist, and other published writings are “scattered” amongst archives.[3] However, after the rediscovery of greater archival resources in the 1980s and 1990s, Lesley Hall has written extensively on Stella Browne, eventually penning a biography of Browne in 2012.[4]

Nevertheless, there has been comparatively limited consideration of how Browne impacted the sexual politics of the era and movements beyond the interwar period. In fact, Browne made significant ideological interventions in discourses on abortions right, which went on to gain currency in the sixties.

Stella Browne was a lone voice in the campaign for abortions rights during the interwar period. In fact, some historians have criticised her as a single-issue activist. Browne advocated for a wide range of issues, but as the primary speaker on abortion, it has often dominated her legacy.[5] Her first public comment on the issue of abortion was in March 1915 in a letter to the Editor of The Malthusian entitled “Baby-Killers, and others”. In her early sentiments on the issue, she advocated for the decriminalisation of abortion based on the unreliability of contraceptives, the economic stress it presented for women, as well as the simple lack of maternal desire in some women.[6] Yet, by 1929, Browne’s stance on abortion was far more militant. In her lecture at the 1929 World League for Sexual Reform, Browne demanded abortion rights for women based on a “woman’s right to choose.”[7] Indeed, she argues that “it would be an equal mistake to ask for relief to unwilling motherhood in the case of rape only…”[8] In this way, Browne created a dialogue in which abortion was expressed as a right irrespective of a woman’s physical, economic or emotional health. In fact, abortion rights purely for instances of rape are rather problematic. This line of argument only grants female bodily autonomy once a woman’s body has already been violated. As such, Browne articulated an early ‘pro-choice’ sentiment; a stance which is now the default of most Western feminists.

Nevertheless, in the context of high maternal mortality rates in the 1930s, Browne also highlighted how clandestine abortions could cause permanent disabilities or fatality to women.[9] It is widely accepted that clandestine abortions, often performed in unsafe conditions, are closely associated with high maternal mortality rates. In fact, Browne drew on the increasing maternal mortality rates in her 1929 paper. Here she emphasised that “Every hospital, every nurse, every doctor knows of such cases.”[10] Eight years later, in an emotionally frank discussion with the Birkett Committee, Stella Browne revealed her own abortion and how she was lucky to be alive.[11] Browne, therefore, demonstrated that criminalising abortions does not stop abortions; it just facilitates unsafe abortions. Through acknowledging that abortion occurs irrespective of its legal status, Browne positioned the right to abortion as a public health measure as much as an issue of female equality.

Browne’s advocacy on abortion rights went further than just pen to paper. In 1936, alongside other prominent sexual reformers, she founded the Abortion Law Reform Association (ALRA). Browne was an active member of ALRA, speaking at numerous talks across the country as well as publishing letters to Editors in newspapers and journals.[12] The transition across the interwar period from a “solitary campaign” for abortion law reform to the establishment of ALRA was a significant development in and of itself.[13]

During the interwar period, there was a slow pace of change for ALRA, whereby Multiple Bills for abortion law reform were rejected.[14] Yet, ALRA laid the foundations for the 1967 Abortion Act, which decriminalised abortion. Hall has highlighted how second-wave feminists benefitted from the already established ALRA; their campaigning experience and network of Parliamentary and other influential connections allowed for a far more focused and thus effective campaign in the sixties.[15]

ALRA did receive support from other women’s groups both during and immediately after the interwar period. For example, in the late 1930s, the East Midland’s Working Women’s Association advocated for abortion law reform, even giving testimony to the governmental committee on existing abortion law.[16] In 1954, moreover, the Women’s Cooperative Guild passed a resolution in favour of abortion law reform.[17] Furthermore, prominent sexologist Norman Haire publicly announced his support of Browne’s abortions views in 1932.[18]

From a solitary voice in 1915, Browne had helped establish ALRA and garner influential backing of her cause by the 1930s. The interwar period may, therefore, have seen no tangible legislative gains for abortion rights, but Browne created the conditions for the successful passage of the 1967 Abortion Act. Furthermore, Browne established a dialogue which situated abortion as an issue of bodily autonomy and public health, as not only a female right, but as a wider human right. In this way, Browne was a forebearer of the pro-choice sentiment which would garner popularity in the feminism of the sixties.

It is incredibly difficult to measure the impact of Browne’s activism. The ideas she promoted in her writings were likely to have a limited readership. However, also by their nature, the permeation of ideas into a culture is far more difficult to track than legislative changes. Furthermore, there is a risk of overtly, and inadvertently, promoting a teleological interpretation of history when considering an individual’s interventions and their significance. We must be conscious of how the tempo of change felt to contemporaries. It is unlikely that the ideas of Browne’s, which went on to gain currency in the sixties, were perceived as having permeated interwar British society as significantly at the time.

As a prolific writer, Stella Browne’s legacy lies in her semantic interventions, influencing the ideology of second-wave feminism. Browne encouraged a socialist analysis of key issues in feminism, demonstrating that the female body was a political site. Browne’s socialist feminism, therefore, laid the groundwork for the rallying cry of the second-wave feminists that the “Personal Is Political”.

[1] L. Hall, “‘Not a domestic utensil but a woman and a citizen’: Stella Browne on Women, Health and Society” in C. Lawrence and A. Mayer (eds.) Regenerating England: Science, Medicine and Culture in Inter-War Britain (Amsterdam, 2000), p. 278.