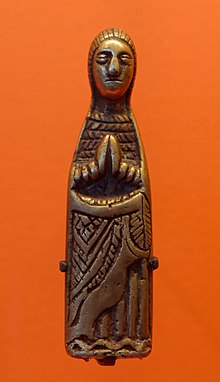 Gender And Power in African Religions: The Case of Dona Beatriz Kimpa Vita

Gender has played an integral role in understanding and (mis)understanding African religion, in particular the case of the Antonian Movement. Dona Beatriz Kimpa Vita (1684-1706), a rather obscured African historical figure, claimed in 1704 to have been visited and then reincarnated as St Anthony of Padua during a nearly fatal fever. Quickly gaining a following, Dona Beatriz led what has become known as the Antonian Movement.[1] The aims of the movement were for the reunification of the Kingdom, as well as more general religious changes such as indigenising Christianity to Kongo, introducing new prayers (the Salve Antoniana) and encouraging the burning of crosses, and other Christian symbols, that Dona Beatriz now labelled idolatrous. [2] In the place of such Christian symbols, were new statues of St Anthony.[3]

As an outgrowth of women’s history, gender has often been invoked as a synonym for ‘women’.[4] Yet, Scott has demonstrated how ‘gender’ has a relational quality, invoking comparisons between men and women. [5] Her definition of gender reflects such a premise –

As a social construct, gender has no fixed or static definition by temporality or geographical region. However, ‘gender’ as a theoretical category of analysis originated in Western institutions. Historians have increasingly criticised the eurocentrism of African studies; indeed, Nyamnjoh has argued that there has been a colonial educational afterlife, demonstrating the continued prioritisation of Western epistemologies, languages and scholars within both African universities and African Studies as a discipline.[7] Consequently, Oyewùmi has warned gender historians against imposing Western conceptions of gender onto African history without understanding the regions and societies being studied.[8]  However, while it remains important to consider that ‘gender’ has its roots in Western epistemology and may, therefore, be less salient within other cultures, in the case of Dona Beatriz, she lived in a milieu influenced by Western ideology due to the presence of missionaries. As such, gender is a useful category of analysis.

From a historiographical perspective, the active consideration of gender has helped counter the erasure of women from the historical record. There, unfortunately, exists no written African-produced sources regarding Dona Beatriz and the Antonian Movement. Instead, historians must rely on accounts produced by the Italian Capuchin missionaries. However, Thornton, the key historian on the Antonian Movement, has encouraged historians to read male-dominated sources against the grain.[9] In this way, missionary accounts are not merely extractive sources, but rather their cultural context must be considered. Such an approach has facilitated consideration of how culturally specific gender conceptions influenced missionaries’ understanding of African religion. More importantly, the approach has also reinstated the role and activities of Dona Beatriz into the historiography.

Dona Beatriz claimed her authority through self-conceiving as St Anthony, a white European man.[10] Within a missionary context, the voice of a white male religious saint would have held the utmost authority. Consequently, Dona Beatriz’s claim to be the reincarnated St Anthony of Padua was perhaps a strategic decision, believing it would facilitate a greater and more hospitable reception of her religious concerns and requests. Indeed, the promotion of sculptures of St Anthony means even the material reality of the Antonian Movement focuses on St Anthony rather than the role of an African woman.[11]

Furthermore, St Anthony was a significant choice not only for his racial and gender identity but also because he was primarily associated with providing care for mothers and children.[12]  Such maternal, and thus typically feminine, qualities of St Anthony complicates the role of gender in understanding the Antonian Movement. The choice of St Anthony allowed Dona Beatriz to advocate for traditionally ‘women’s’ concerns such as fertility and childbirth.[13] Indeed, these concerns were incredibly pertinent within the Kongolese context. For example, it has been calculated that 1 in 4 babies died before their first birthday during this period.[14] Yet, this was also a period in which large families were imperative so children could provide labour and act as carers to their parents in adulthood.[15]  Social historians have encouraged a shift towards considering the agency of historical subjects. In the case of Dona Beatriz, it is worth considering how she utilised Western conceptions of gender to better advance her Africanist religious cause.

Self-conceiving as St Anthony may have been deference to Western conceptions of gender authority, but it was also a way to advocate for Kongolese and women’s political concerns through the lexicon of religion. Taking Scott’s definition that “gender is a primary way of signifying relationships of power”, such a premise holds true in the case of Dona Beatriz. [16] Through reconstituting her gendered identity, Dona Beatriz could challenge the androcentrism and ethnocentrism of Western Christianity. Not only did she challenge the idea that a woman could not be a male reincarnate, but she also called into the question the ethnocentric assumptions that Saints, Jesus and God were white.  In this way, gender performance could be a tool of power for religious women.

Masculinity has, and continues to be, intrinsically tied up with notions of power, authority and status. [17] With gender playing a constitutive role in the creation of power dynamics and social relationships, male legitimisation was of importance to justifying female leadership. Gender performativity, and the reconstitution of one’s gendered subjectivity, was a way for Dona Beatriz to claim religious authority. In the end, Dona Beatriz did not fundamentally eschew Roman Catholicism but instead sought to negotiate it to African desires and needs; yet, she exercised spiritual determinism, challenging the Church and the State.

[3] For visual reference of the statues produced during the Antonian Movement: The Metropolitan Museum of Art, New York, ‘Gift of Ernst Anspach, 1999’, www.metmuseum.org