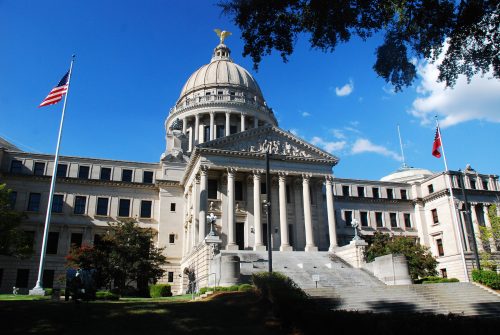 In this article, Jessica Pabon will explore the effect the pandemic has had on US politics in a thoughtful, engaged way. [Featured image credit: ‘Jackson: Capitol Building’, by Visit Mississippi]

‘Coronavirus’: the term that will haunt the world for years to come, eliciting memories of a global pandemic in modernity, which was allowed to senselessly cause over a million death in its first year of existence. The pandemic has influenced every aspect of human life, resulting in quarantines, added stress on societal norms, and divides between individuals, both physical and ideological, where they did not exist before. There is nowhere that more prominently displays these divides than in the United States of America. It is no secret that the USA believes it is revered the world round for being the hallmark of democratic intent, even when that title is not necessarily deserved or earned, but the severity of the misconception has been proven time and again over the course of the COVID-19 pandemic. Indeed, while it is impossible to cover in entirety the pitfalls of American political systems and their effect on the rest of the democratic world in a short essay, it is useful to consider the impact of these things in short form, from a generally globalized perspective.

While studying another nation’s situation, it is important to investigate one’s own biases and prevent these from interfering. This is best accomplished by observing the topic of interest with as much of a logical mind as can be mustered. While perhaps difficult to admit, it is clear that isolationist tendency is not some modern invention coming about with the development of democracy, nor that of the induction of the United States to the world stage. It is made clear through thousands of years of human history, that isolationism—more often construed as the prioritization of oneself and one’s family—is not restricted only to the US, as it is clearly present in nations around the world.

The indifference displayed by UK nationals while considering the state of US affairs is quite understandable, and oftentimes returned in kind by the citizenry of the United States. Indeed, citizens of one country oftentimes do not have the mental or emotional space to hold both their own nation’s problems, and another’s, on top of the strains of everyday life. While this is a valid situation, one must question the morality of the willing ignorance of the well to-do masses. With notoriety and prosperity comes a certain responsibility on the world stage, and much as campaigns in the United States have noted throughout the late 2010’s, it is every voting-age citizens duty (the world round) to pay attention and act when they see injustice done. This mentality has infiltrated the democratic world over the past several hundred years, and where some view the consequences (mass protest, landslide votes, societal change) as dangerous, others see it as inevitable and just.

Feeding off the theme of elections, it is not any secret that the COVID-19 pandemic played an exceptionally dynamic role in the United States general election. However, a more often unspoken truth is the level to which pandemic propaganda statements were utilized to sway the outcome. Putting aside the moral consequence of world leaders using a deadly, dangerous virus as a political tool, it must be recognized that an election, at its core, is a popularity contest. Indeed, it was in this aspect that the race came to a treacherous precipice in 2020. If nearly half the voting-age citizenry of the United States believes in economic gain and isolationist theory over love-thy-neighbor style responses to human suffering, how will (and how should) the rest of the world react? Not only is the unstable nature of American politics at present a danger to international relations, it also threatens the very foundation of democratic processes much of the developed world relies on. If American democracy can be called into question by one man serving one four-year term—can it be trusted to remain stable at all?

Incumbent President Donald Trump claimed to have ‘beaten’ the pandemic, at a time when case numbers (and soon to follow, death rates) were beginning to rise once again, in order to convince his voting population that the world was returning to ‘normalcy’. This ‘Make America Great Again’ ideal had been presented as a running campaign promise, despite the arbitrary nature of the statement. Throughout 2020, the Trump administration continued to peddle the notion that the virus was non-lethal, that masks were a ‘mixed bag’ in their effectiveness (NPR), that governors were destroying economies by placing states on lockdown, even at one point (accidentally or not) seeming to discredit the Center for Disease Control and their own taskforce. On the opposite end of the spectrum, to counteract these proclamations, Vice President (ultimately President-Elect) Joe Biden campaigned on a platform of calm, concise, direct action. This endeared the candidate to Democrats—most of whom were desperate for health and safety, racial justice, and overall equality to return to the nation four years separated from President Barack Obama—and alienated staunch Republicans, hearts set on economic prosperity in a time of seemingly imagined strife.

“With notoriety and prosperity comes a certain responsibility on the world stage, and much as campaigns in the United States have noted throughout the late 2010’s, it is every voting-age citizens duty (the world round) to pay attention and act when they see injustice done.”

Covid-19 hit the modern world where it hurt most—limiting productivity, destroying economies, and causing changes in societal norms that would otherwise have taken years to alter. The situation came as little surprise to many young people, specifically those members of Gen-Z from less advantageous backgrounds; months off school cause learning gaps that cannot be filled before A levels must be taken, graduates unable to find jobs, first years at university suffering alone in residence halls as their already dangerously digital world flips nearly entirely online. The pandemic, to many, felt as if it were just another contribution to a long line of negative events to take place in their short lifetimes. The effect is similar in the US, and around the globe—utter dejection and apathy, a true sense of disappointment in authority. Despite this, or perhaps because of it, the US general election of 2020 took a new turn, a turn that perhaps elicited a sigh of relief from most world leaders. Without young people, and particularly without young people of color, these events may not have taken place at all. In 2020, the next generation took the first step towards bettering their futures, by engaging in the democratic process. This looked different for many, as millions voted by mail, others early, still others on election day—one thing remained true. Millions (79,823,827, to be exact) of US citizens voted for the improvement and humanization of society.

Despite the certainly less-than-seamless situations of the year, 2020 will live on in history for generations to come as a time of immense strife and social change. It is the hope of the author, however, that alongside the lists of all that which went wrong in the year, there are entries of what went right; of families building plastic cuddle stations, neighbours going grocery shopping for the elderly and immunocompromised, of worldwide protests for Black Lives Matter and civil rights, and of celebrations over zoom calls. It is important to recognize the significance of politics, in home nations and internationally, but it is far more important to cling to the sliver of humanity that remains in this digital, socially distanced world.