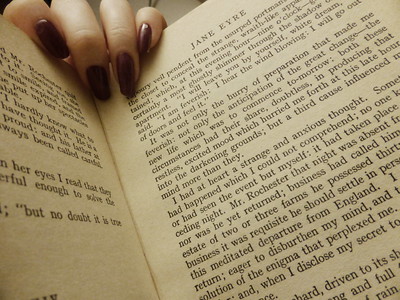 Jane Eyre: A novel of resistance and rebellion? by Millicent Jarvis- Scott

In this thoughtful and incisive essay, Millicent explores resistance in Jane Eyre.

Literature which can be described as rebellious and resistive should be willing to go beyond social norms in a revolutionary way for the time period, something I would argue that Bronte is successful in doing in her novel ‘Jane Eyre’. Even the action of writing ‘Jane Eyre’ in 1847 could easily be considered to be an action of resistance, against both a literary culture which placed less value on female narratives, and a society which reinforced these ideas through the systematic subjugation of women. The presentation of female characters is arguably a central part of the novel which both strengthens and introduces further complexities around the idea of ‘Jane Eyre’ as a rebellious novel. Moreover, the relationship between Mr Rochester and Jane is ultimately unconventional for the time period, emphasising that Brontë intended to write a novel which uncovered some elements of transgression and rebellion to her Victorian readership.

The character of Jane can be said to offer an alternative to traditional literary heroines of the era. In her characterisation as a governess who is seemingly headstrong and has a strong sense of self-worth found outside of concerns about physical appearance, Bronte creates a more relatable and ordinary heroine. This idea is emphasised in the quotation ‘the restlessness was in my nature; it agitated me to pain sometimes’[1]. Here, Bronte creates a woman unhappy with imprisonment and a stagnant existence, perhaps showing that Jane is a mouthpiece for Bronte’s own beliefs at places in the novel. As a reflection of this, Wilks argues that ‘The position of women in society and the theme of rebellion are present from the first pages of the novel’[2], consolidating the idea that Jane’s characterisation and her refusal to accept mistreatment due to her class and gender are key rebellious aspects within the novel. Arguably, Jane is able to move up the social hierarchy and become equal in her marriage due to the strength of her voice as opposed to stereotypically feminine characteristics, such as beauty or elegance.

Similarly, the popularity of the novel largely came from its emergence as a fiction with a strong, new female narrative, showing feminist interpretations of the text can and should be endorsed as relevant both in a contemporary and modern light. One of the most famous quotes from the novel, ‘I am no bird; and no net ensnares me; I am a free human being with an independent will’[3] is made more poignant in being addressed to her future husband, thereby establishing her freedoms. The natural imagery of the bird adds to this, linking Jane’s strong will to the landscape around her, and showing her to be more powerful than she appears. Moreover, within the constraints of the Gothic realist novel, Bronte allows for a female character who is able to achieve self-realisation and autonomy. The novel can be read as an exploration of the self, and Gothic elements such as Bertha’s insanity can be shown to be a mirror into what Jane could potentially become without restraint over her desire. In this way, Pyrhönen discusses the similarities between Bluebeard and ‘Jane Eyre’, arguing that ‘Jane has within her psyche a crypt-like space comparable to Bluebeard’s vault: it is a traumatic, forbidden region. It is this space that makes Jane responsive to the enigma of Bluebeard’s chamber.’[4] This quote therefore reinforces psychological interpretations of Jane Eyre, showing her to desire a family and stability due to her somewhat traumatic upbringing, arguably one displayed most prominently in the red room scene[5] of the novel. Furthermore, it links Jane’s inner self to the entrapment of the physical and domestic spaces she finds herself in, showing the novel to be rebellious in its display of the psychological impact of confinement, shortly before the popularisation of the first wave feminist movement. Arguably, Jane’s admittance of the stifling nature of domestic life is the reason this novel became a crucial text for second wave feminists of the 1970s and 80s.

Another reason I believe ‘Jane Eyre’ can be considered a novel of rebellion and resistance is in its interesting portrayal of Jane and Mr Rochester’s relationship and marriage at the end of the novel. However, whether or not this eventual marriage allows for Jane’s freedoms to be maintained is a complex debate. Arguably, Jane chooses to return to Mr Rochester to be once again constrained in the domestic sphere, a conflicting idea for feminist critics. It has been argued that ‘Rochester’s idea of Jane as his fairy-tale instrument of salvation comes true – but not until it has been rewritten in Jane’s terms’[6]. I would largely agree with this; whilst the marriage rebels against certain societal conventions, such as in its ignorance of class status, it still places Jane in the role of carer and ‘angel of the house’. However, Jane’s description of the state of her marriage at the end of the novel depicts a seemingly egalitarian relationship. Rochester’s blindness arguably plays a key role in this; ‘he saw nature- he saw books through me’[7] appears to give Jane dominance in the marriage by allowing her husband to see only through her worldview. In asserting her female gaze by literally replacing the male gaze, the character of Jane is able to create a marriage more suited to her autonomous nature. Similarly, it can be argued that unlike many wives of the period, Jane was able to transcend class and gender boundaries in order to pick a husband, making this a truly rebellious novel for the Victorian period. This point links to the issue of class within the novel, an idea which some contemporary critics pointed to as being a major issue, particularly around Jane as a social climber.

Moreover, Jane’s rise in class through her marriage may be seen to embody larger developments of the time period, including a rise in social mobility. In this way, Bronte utilises the social upheaval of the period in order to forge a new type of equal, classless marriage between her two characters. Wilks argues that ‘the juxtaposition of wealth and poverty is the constant backdrop to the developing story’. In developing this point, I would also argue that placing the romance plot in amongst the trappings of class and status allows for more sustained focus on the differences between the two characters. Perhaps it is because Jane does not desire wealth and riches (‘Jewels for Jane Eyre sounds unnatural and strange’)[8] that she appeals to Mr Rochester; her restrained, naive nature is at odds with the passionate Bertha. However, modern adaptations of the novel have undermined and reduced notions of equality within this marriage. Fanning states that the 2006 version ‘transforms into a fantasy of sexual egalitarianism that dangerously ignores the strides for autonomy that the novel’s Jane labours to acknowledge’[9], showing that a clearer focus on sexuality in the adaptation risks losing other key elements in the relationship, in particular the humorous, intellectual exchanges which make up much of their courtship. In contrast to this point, I would argue that the overt sexual relationship presented in the modern adaptation is liberating in its own context; it is a somewhat reductionist argument that Jane would not be able to be both sexually and socially liberated.

However, the problematic portrayal of Bertha Mason presents an issue when discussing whether the novel can be viewed in a rebellious light. It can be argued that ‘Bertha’s oppressions and inferiority are configured and fused in images of both the racial other and the exotic display’[10], a quote which highlights the colonial undertones which underpin Bertha’s description, and firmly set Jane Eyre within the Imperial Gothic tradition. Much of the wording used to describe Bertha makes for uncomfortable reading to a modern reader, and furthermore shows that Bronte plays upon racial stereotyping of the era in order to comment on both madness and womanhood. Jane’s description of a monstrous being who ‘snatched and growled like some strange wild animal’[11] distances Bertha from humanity, and places her outside of civilised, restrained society. In representing a regressed figure of womanhood, Bronte reveals Jane’s own fears about the release of passion and desire. To further this argument, we can return to psychological interpretations of the novel – Shuttleworth argues that ‘Jane Eyre focuses on two of the classic images of excess in Victorian psychiatry: the passionate child and the hysterical, insane woman’[12]. Whilst Jane’s story can be seen through the lens of a bildungsroman, a development from the passionate child into the proper Victorian woman, Bertha is not granted any character development, being placed only in the category of hysterical woman. In this way, it can be argued that Bronte does not rebel against the conventions of the time, simply choosing to exploit contemporary fears of madness and the exotic ‘other’.

In a similar way, a key argument as to why the novel could be viewed as giving into traditional stereotyping rather than being particularly rebellious or resistive is its complete lack of female solidarity. It has been said that ‘Jane’s struggle for feministic individualism…excludes the claim for humanity for Bertha’[13], showing that the novel establishes the idea that to be successful in marriage, women must compete, and ultimately attempt to destroy one another for love and status. Jane shows little sympathy for Bertha despite her hardships, showing her individualistic focus. Overall, Bronte seems keen to convey the idea that women must be selfish to become successful in their endeavours – there is not enough room for the emancipation of all Victorian women. The female characters in the novel, in particular Bertha and Jane, are viciously compared and contrasted, and restrained within the male gaze of Mr Rochester. He compares both their appearance and purity, ‘compare these clear eyes with the red balls yonder’[14], therefore not allowing either woman to be characterised as independent beings. Moreover, the colour imagery presented here arguably links to the sexuality of the two women: whilst Jane is pure and virginal, Mr Rochester views Bertha as ‘red’, the colour of lust and passion, showing she is sexually tainted in his eyes.

Overall, the question of rebellion and resistance in the novel ‘Jane Eyre’ is somewhat nuanced. However, it can be seen that aspects of revolutionary thought can be clearly seen throughout the strong female narrative. In creating a sympathetic, autonomous female narrator, Bronte paves the way for feminist thought, allowing for readers to consider the possibility of female emancipation both in a literary sense but also in life away from the pages of the novel. Jane’s existence as an outspoken freethinker challenges established, patriarchal order. Her status as an early feminist literary heroine is perhaps due to her inherent sense of self-worth and self-belief, explaining why the novel endures as one of freedom and rebellion.