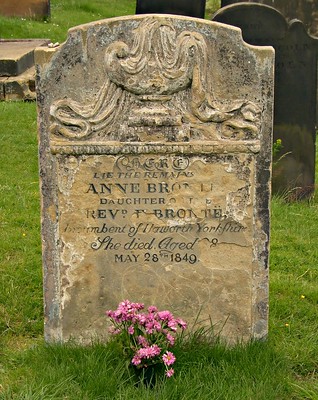 Take Courage, Have Hope: A Creative Piece by Charlotte Watson

Note from the Author

I first read The Tenant of Wildfell Hall during my last year of secondary school, and from the very beginning, it struck me as a hugely engaging, critical, dare-I- say- it feminist text. It was bold and subversive, revolutionary and impactful, and yet still maintained a sense of the Victorian sensibility of feeling. In short, it seemed to me to be the very opposite of the way in which Anne Bronte is primarily characterised. For example, Helen Graham’s (the protagonist) extraordinary act of independence appears to be in direct contrast to the idea of Anne as a meek, long-suffering martyr, more resemblant of The Old Curiosity Shop’s ‘Little Nell.’ In short, in The Tenant of Wildfell Hall, there is a picture of a more wilful, resolute Anne, who is unafraid to give raise to her voice, in a society, where men hugely controlled the narrative.

What also struck me about the novel was its stark difference to the other Bronte works; for example, despite her numerous attempts, there is no sense that Helen can reform her husband or salvage his soul; he is too far gone, having succumbed to drink. To clarify, Arthur Huntingdon is no brooding but tameable Mr Rochester, nor does he share the captivating intensity of Heathcliff, which imbues the novel with a poignant sense of realism. There is no fantasy element or wish fulfilment in Anne Bronte’s works. Huntingdon is an alcoholic, and he faces the consequences for it. Part of me wonders whether this realistic view towards wayward men and addiction stemmed from the fact that Anne was the one, who had to witness Branwell’s downfall, which consequently prevented her from being able to romanticise anything like it.

It is this view that perhaps founded the inspiration behind my creative piece, the idea that Anne wrote The Tenant of Wildfell Hall as a response to the turmoil she had witnessed Branwell undergo. Nevertheless, however, through this writing, I have also endeavoured to offer a snapshot into the determined, resolute character of Anne, establishing why she is different but equal to her more famous sisters.

Finally, I have also attempted where possible to include references to several aspects integral to the Brontes’ own lives, such as Anne’s Bible, Gondal and Angria, as well as Walter Scott (one of Charlotte’s favourite authors), in order to ensure that you enjoy this very short trip into Bronte land.

We live the stories we tell.

They are ingrained within us: pulsating, beating, yearning. They are our unborn children, which we nourish deeply, brought into life by the smooth stroke of the pen. Our life written into the narrative.

The words give birth to our profoundest thoughts and are crafted from our most deep-seated fears, which lurk, enthroned, upon the page.

As I stroked the matted hair on his brow – as I held him as our mother had many years ago – I wondered at the power of the haze he was under. How his glassy eyes gazed back at mine in a vague recognition of a mirrored humanity.

It was easy to believe then in his propensity towards lovesickness, easy to believe that was the prognosis behind his demise. He was the embodiment of Scott’s knight errant, assuaged by dark melancholia. Behind his murky eyes lay the shadows that had poisoned them, dark whisperings of darker temptations.

And yet he lay humbled and prostrate in my embrace, adult enough to have felt remorse yet child enough to ignore its consequences. That was indeed the most accurate way to describe him – in a perfect state of ignorance. And he had been from the moment he was born, perhaps we all had been. After all, we were all too apt to think of life as a story, as in a way it was. But of course, life was only one’s own story. It was no Gondal or Angria, where the victories of battle or usurpation were predetermined.

In life, you did not even hold control over your own story, as those of others so often invaded its narrative. And as such, others could craft you into a character whom you never were, like they will eventually do to him, I think. They will chip away at his character, until all that is left is a stagnant picture of what they want him to be. Drunkard. Adulterer. Scrouge. Because that cannot be who he is alone. Brother. Son. Author. Can we define a life by words?

And if so, how do you define it, when the helix of life has begun to unravel, when the passage of reason to the brain has been halted by the quickening of emotion?

Emotion: it is that which plants the seed of spirit in every author. None of us – not myself nor my siblings, have ever truly been short of it. In the inferno of deepest feeling, the ashes of the world give rise to spectres or smudges of unknown characters floating around on the page. In the inferno of deepest feeling, the mind is set to blaze with thought.

But blazes too are incontrollable. And I wonder now if my brother burnt too fervently, too voraciously, so that the earth, his body, retaliated. That it put out the flames of love with a stronger, more pertinent substance, that it traded intensity for numbness. I just want him to feel again, that is all, and yet perhaps not, as it was feeling which started this chapter.

Only now do I consider the naïve beginnings of it all. Stolen glances, hidden blushes: an adult game of hide and seek, which captivated just as much.

For him, it was all too easy to imagine away his lady’s imperfections. After all, it was part of the story he thought he was living, a story where their love was so strong that it defied all consequences. It never occurred to him that he was a mere instrument for her, a vessel for which to steal away her own feelings of loneliness, of unhappiness.

He could not think past the ending he had prewritten for them, for himself and his lover.

I think back now to the moment that ending had died, falling limp and fast within my arms. It was no coincidence that I was carrying my Bible then, as I am now. Where shall I be when I have finished it? Where shall he be? I scarce know, only that we will be there together when it is over.

We have to be…

I do not say ‘we will’ for fear of falling into the trap of his old habits. I cannot write the future for that is God’s work alone. And yet it is not so inconceivable to hope that we may find an antidote to this poison.

Hope… Charlotte is oft to laugh at my use of that word. She so genuinely wants to characterise me as meek little Anne, whose life is like the flame of a candle consumed by burning, who exudes warmth at every turn. And sometimes, I do verily want to be that person, because I know it is what my sister needs – a martyr.

But at the same time, I cannot be martyred for the falsest sense of hope. Hope, instead, is the resolve to walk down the path of life in whichever direction it takes, knowing inside that you shall always be true to yourself.

Hope and resolve are what kept me beside him, when he became the monster within his own story. When his eyes lost the glimmer of humanity, and his cheeks the rouge of life.

I declare resolutely that I cannot tread the path of my siblings, who are so wont to lose themselves in the story world. I cannot be like those, who write to escape, because that is to remain ignorant of writing’s other power. And that is that for all its propensity towards falsehood, writing is the greatest form of truth there is. In writing, we produce a physical embodiment of our voice, our identity, our being.

By writing, we are finally able to seize control of our own narrative, contrary to the mould life would cast us in.

But looking at him now, child and man alike, I know that the narrative cannot contradict reality; instead, it must walk alongside it, so that our stories come from part of ourselves, and do not consume us.

Looking at him now, in the innocence of slumber, I know it is time to take courage, and rewrite the story I have only erstwhile witnessed. I have lived out my words and now I must write them, even if they drown in disquietude.

Criticise not the author, but the society, which prompted her acute judgement.

And so it commences, but to begin with ‘you must go back with me to the autumn of 1827.’