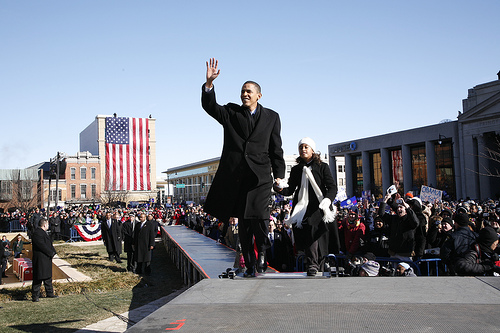 ‘In Obama We Trust’?

A wise woman once remarked of Barack Obama, ‘how’s that hopey-changey stuff workin’ out for ya?’ While this quotation derives, unfortunately, from Sarah Palin, it does quite pertinently satirise Obama’s struggle to build upon his expansive campaign rhetoric of 2008; ‘Yes We Can’ has become the rather less catchy ‘Yes We Could Have Done If The Republicans Offered Us Some Measure of Bipartisan Support’. By consequence, the Obama campaign of 2012 has failed to capture hearts and minds in quite the same way. Luckily for Barack, the Mitt Romney gaffe-machine was firing on all cylinders, producing gems such as this:

To expropriate the words of Churchill, never has so much offense been caused to so many by so few!

Nevertheless, the election still remains close. For many people in Britain, this is perplexing. Indeed, a GlobeScan/PIPA poll conducted for the BBC found that 65% of Britons would vote for Obama compared to 7% for Romney. Amongst young people, the preference for Obama is even more pronounced. The only person I have spoken to in Durham in favour of Romney was from Chicago! Unfortunately for us, however, as Ed West wrote for the Telegraph, ‘note to European liberals – no one in America gives a damn what you think about the US election’. Indeed, while I enjoy laughing at the often ridiculous Republican party as much as the next man, it is important to remember that there exists in America widespread concern about the direction the country is heading in. The unemployment rate remains high at 7.9%, the national debt has risen to over $16 trillion and $607billion worth of tax rises and spending cuts are to be implemented in January. The scale of the problem is huge and places our own government’s fiscal consolidation plan in firm perspective.

We cannot, moreover, ignore that Obama has proved, thus far, incapable of solving these problems. No doubt this is due in large part to Republican intransigence.  However, Obama struggled to pass his Obamacare proposals even with a supermajority in the Senate and control of the House. With conditions much less favourable, he failed to adapt and work to compromise with the Republican-controlled House of Representatives. We can only hope that if Obama wins, as seems likely given his strength in the 10 key swing states, he proves more able to grind out tough compromises. It may not result in the kind of changes liberals want. Nonetheless, if gritty compromises with the Republican Party help to bring the American economy back from the brink of default, then that would represent change I can believe in.