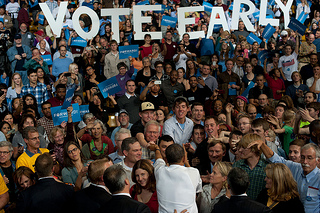 Is the US a democracy or a mockery?

The United States of America was born from the slogan ‘no taxation without representation’. In order to achieve representation the public voice needs to be heard. This is realised through elections based on popular votes. The extensive use of opinion polls would give the impression that every vote counts; sadly this is not the case. It is my belief that the US presidential election is an inherently flawed and undemocratic process. This centres on the use of the Electoral College. What many people do not realise is that the votes cast on Election Day do not elect the president. They are counted and the result passed to each state’s Electoral College which votes accordingly. This indirect election and the fact that some states vary in how they allocate the votes makes the election unequal. Furthermore, it is not only the 50 states that have Electoral Colleges, and thus vote for the President, but also the District of Columbia.. However, no other US Territories have such a democratic right but are still expected to pay tax. This system allows for unequal representation in some areas and taxation without representation in others, thus rendering it undemocratic.

The Electoral College is the body that votes for the president. It has 538 votes so 270 are needed to win the election. This number comes from the 435 members of the House of Representatives and 100 from the Senate plus 3 from the District of Columbia, which is not a state. Each state has as many Electoral College votes as the sum of the number of Congressmen it has. This essentially means that the more populous a state the more votes it has, although there is no set ratio. Once each state has determined who has won the popular vote the Electoral College votes are cast. 48 states operate a winner-takes-all system. This means that should a candidate win a state by, in theory, as little as one vote he would win all of the Electoral College votes. This gives disproportionate power to the so-called swing states. In most of the states it is almost a foregone conclusion which candidate will win; the votes of the 70% of Americans in these states count in the Electoral College but do not determine the winner. In the thirteen swing states each individual vote can be seen to count for more than in the more predictable states. This is clearly undemocratic.

The presidential election is run by each state and is best looked at as a series of simultaneous state elections not one federal election. This gives each state a degree of independence on how they run their election. It is the imbalance that stems from this that causes the election to be unbiased. Two states (Maine and Nebraska) use a different method from that outlined above. They offer two electoral votes to the overall state winner and one to the winner in each congressional district. This means that in effect their votes are counted twice, once in the congressional count and once for the state-wide total. Incredulously, in North Dakota one can vote without even registering! This lack of uniformity makes the system inherently undemocratic. During the same election different people’s votes are allocated in different ways based purely on where they live.

Another undemocratic feature of the Electoral College is that someone with over 50% of the popular vote could be defeated. The unequal allocation of electoral votes per capita means that this is a distinct possibility, and not just mathematically. It has already happened four times in the past and could happen again this year. Romney is expected to do well in the populous southern states but Obama expected to only narrowly beat him (according to the opinion polls at time of print) in the swing states; so Romney could take over 50% of the vote but fail to dislodge the President form the White House. In 2000 George W. Bush polled half a million votes fewer than Al Gore but won 271 electoral votes.  A system that allows the loser of the popular vote to win the election is undoubtedly not democratic.

Furthermore, there are inconsistencies in who is actually allowed to vote. All 50 states vote and so can one of the United States’ Territories: District of Columbia (D.C.). The other territories, like Guam and Puerto Rico cannot, but are still expected to contribute taxes. As a sign of protest Guam has held a straw poll for the election ever since 1980 to draw attention to this fact. D.C. is the capital of the US and so is not a state so that all 50 states are equal. This means it cannot elect Congressmen but it is allowed to elect the president. It is awarded the same number as electoral votes as the smallest state. As it is essentially only a city it means that there are approximately 190,868 people in D.C. per electoral vote. In comparison, California has 615,848 people per vote. Therefore, one vote in D.C. is worth roughly three times more than a Californian’s. As only one territory can vote it is undemocratic as it leaves many citizens disenfranchised. Add to this the fact that D.C. is disproportionately represented and it is clear this system is not in the least democratic.

On the campaign trails it is common to hear politicians telling the voters that it counts, yet some votes are more important than others. The Electoral College leaves many without the vote at all and ensures others’ counts for little. Furthermore, there is a lack of consistency throughout the procedure. All this ensures that whilst the elections give people representation; it does not give them equal representation.  Therefore, the election that determines the ‘leader of the free world’ is not democratic. Perhaps the time has come for America to stop introducing democracy at gunpoint and look to democratise its own election.

Matthew Gillett is in his third year, studying History.