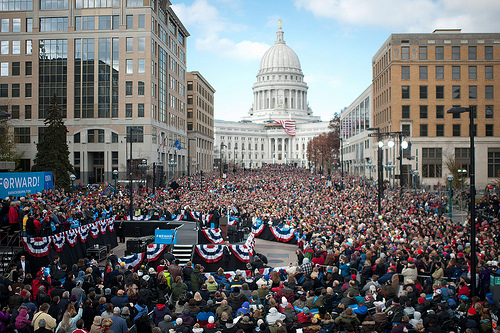 Hear what Taha Abrar has to say on the election as it happens. Link to a Live Commentary on the Presidential Election, straight from the sofas of Butler Bar:

Ever since Rick Santorum’s withdrawal all but secured Governor Mitt Romney’s ascension to the Republican Party nomination, the fight to be the President of the United States has captivated the US and much of the watching world. From 47%-gate to the Laughing Joe Biden Meme, it’s not an accident that this is the one foreign election that demands your attention. It is, after all, an election to a post often described as The Most Powerful Man On Earth.

Bob Dorough got it all wrong. It isn’t 3, rather 270, that is the magic number. That is the number of electoral college votes (ECVs) needed by either candidate to win the Presidency. Some handy links will be provided if you’re a newbie to the US electoral system, but important to remember throughout tonight is that the ECVs, not the popular vote, that is the deciding factor.

So there we go; are we to have a 45th President of the United States? Or has number 44 still got 4 more years in him? Soon, we will know the answer. All the real action on the BSJ Live Blog will kickoff later on today, but for now, sate yourselves with understanding the slightly complicated system by which the US elects its Commander-in-Chief and Head of State.

4:07
BSJ:
Here is a video from the Economist on the way the Electoral College works:

4:10
BSJ:
Another video now, on the key swing states that will decide the election. For your delectation:

4:27
BSJ:
That’s it for now, but BSJ’s Live Election Blog will be back later tonight. See you then for some real life drama, with you all night!

4:29
BSJ:
I do recommend getting a nap or two in before things start getting interesting later on tonight. Now you all know what I’m going to be doing, feel free to join me (figuratively speaking of course). Let’s all go catch some z’s

10:09
BSJ:
Welcome back to BSJ’s Live US Presidential Election Blog! We’ll be with you throughout the night, and hopefully into the early hours with the latest news and all the way up until we know whether we’ll be celebrating a victory for the Grand Old Party and Romney or the Democrats and Obama.

10:12
BSJ:
This election is going to come down to between 8-11 key “swing” states. A bare knuckle street fight is sure to ensue, with both candidates criss crossing these states in a last ditch attempt to mobilise their support

10:14
BSJ:
If you like a heavy dose of comedy with your politics, Jon Stewart and Stephen Colbert will be on live. Both are hilarious, so if you can find a stream which is showing their coverage, find it!

10:16
BSJ:
I will be doing my best to reply to all your messages tonight guys, so please send in any and all queries and I will do my best to answer them either publicly or privately!

The email is just above.

History shows that no Republican nominee has ever lost Ohio and won the Presidency. Even George Bush won it in 2000. I would not rate Romney’s chances at all if he didn’t carry Ohio

In truth, the “special” relationship between Britain and the US hasn’t been the same since Obama came to office. Romney’s rhetoric with regard to Iran has been much more volatile and straight out of the hawkish Bush Administration’s playbook. In effect, Romney would rely on international backing for any invasion/aerial attack on Iran so would need Britain’s support, especially on the UN Security Council. This would require a return to the cosy relations enjoyed during the noughties, but whether that is in the best interests of Britain and her interests, I would sincerely doubt.

10:29
BSJ:
The bare knuckle street fight I was referring to earlier:

10:34
BSJ:
According to some, Virginia could be a good indicator on the way this contest may end up.

10:40
BSJ:
Have a look at this rather useful graphic. I know I will be checking it throughout the nighthttp://elections.huffingtonpost.com/2012/results

10:47
BSJ:
Here is a concise Fox News look at a handful of ways the election could go

11:01
BSJ:
This is the first Presidential election with the Supreme Court ratified Super-PACs. These are essentially private and supposedly independent organs that campaign on behalf of either candidate. Although their impact is currently unknown, their donations have certainly helped power the anti Obama sentiment, with pro Romney Super Pacs (mainly Restore Our Future) out-raising pro Obama ones.

11:06
BSJ:
Will Kendall (who’s excellent article you can read herehttp://jbscholarlyjournal.wordpress.com/2012/11/06/ohio-holds-the-key/) believes that if anything, Super Pac’s drive apathy. Having spent some time in the US with Organising for America and gauged some opinion on them, Will feels that Super Pac’s irritate a number of people as the ads they back are very brutal and attacking.

11:15
BSJ:
In my opinion, if Obama takes Pennsylvania, Florida and Ohio, he has this election in the bag. However, if Romney takes Ohio, everything gets a whole lot closer. “Squeaky bum time” to quote the great Sir Alex Ferguson.

11:36
BSJ:
50,000+ votes counted in Indiana, 15,000+ in Kentucky, both voting heavily in favour of Romney. Obamaniacs, do not fret, neither are key to an Obama win, and currently less than 1% of counties are reporting their results.

11:40
BSJ:
The Huffington Post thinks that there are 4 states where it is simply too close to call; Florida, North Carolina, Virginia and Colorado

11:43
BSJ:
There has been an interesting question raised by a few people now; what if a more moderate Republican candidate has been chosen? More specifically, if John McCain had run again, would he have been more likely to win the nomination this time around? Alas, no way to check alternate universes yet.

11:44
BSJ:
Our dear Butler friend, Bryn Coombe, has just informed me that his friends in the US are predicting a close Ohio victory for Mitt Romney… Could this Presidential election be as close as the infamous 2000 one?

If you think New Hampshire is intriguing, you should have a look at how Nebraska and Maine divvy up their Electoral College Votes

11:47
BSJ:
Of course, it is always hard to tell this early who has the edge and where, especially when no counties in these critical swing states are reporting yet.

11:53
BSJ:
So where is the 44th POTUS, and where is his challenger? Obama has headed to where his political career began, in his ex-Senate seat of Chicago, whilst Romney is in Boston, Massachusetts, where he was Governor.

For me, you can’t go wrong with a bit of Dimbleby on election night.

11:58
BSJ:
The Guardian Live Blog right now reports that CNN’s Peter Hamby has heard “that the last Romney internal tracker had Obama up in Ohio by five percentage points.” Intriguing..

Wednesday November 7, 2012
12:02
BSJ:
Looks like both Florida’s (and historically Ohio’s too) polling stations will be open for a while pic.twitter.com/Z9RbnWlA

12:07
BSJ:
The first electoral college votes are in! Vermont re-elects Barack Obama. 3 ECVs for Obama! That said, Kentucky and Indiana have been called as red states, and their combined 19 ECVs go to Mitt Romney.

12:07
BSJ:
Thank you to Carmen Horrocks for that last link.

12:12
BSJ:
As BBC News has reported, polls in Ohio are scheduled to close at 00:30 GMT. That said, if there are people in the queue for the polls, convention dictates that those polling stations will remain open until the last person in that queue has voted.

12:23
BSJ:
Orangeburg County, South Carolina with 4% of the precincts reports, is strongly voting in favour of Obama. The state is easily predicted to go to Romney however.

12:26
BSJ:
Extremely close in Florida, Romney ahead on the popular vote 50%-49.4%. Only one county reporting an Obama victory here so far, Orange County.

12:28
BSJ:
According to The Thick of It, State of Play and Veep writer Armando Iannucci says that the Democrats he knows are feeling “cautiously cocky”.

12:40
BSJ:
Presidents Twitter feed is urging people to stay in line so they can register their vote.

12:45
BSJ:
Though now West Virginia and South Carolina have been called for Romney (pushing his ECV tally to 33 to Obama’s 3), West Virginia’s Senate seat has gone to Joe Manchin (D). Very interesting win for the Democrats, unexpected certainly.

12:46
BSJ:
Georgia, Virginia and North Carolina have all been deemed to close to call by Fox News

12:47
BSJ:
Fancy a go at predicting which states will end up where, or having a look at what Romney would need to carry should he lose Ohio?