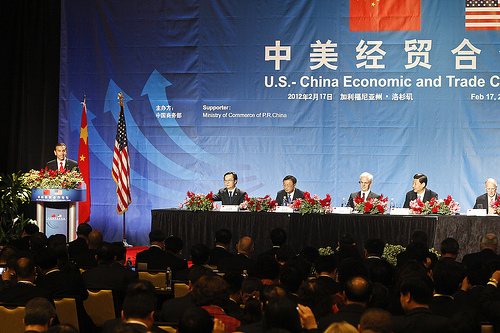 Why all the excitement?

In the 1960 US presidential election the main theme of John F. Kennedy’s campaign was ‘a time for greatness’. Arguably during that period the US was at its most powerful; it had yet to set foot in the jungles of Vietnam for a start. But the election this year, along with being highly negative, has also been about trying to persuade voters that America can get back to that level of power and prestige it enjoyed across the world. Obama has wanted to move ‘Forward’ while Romney has asked us to ‘Believe in America,’ but can we do that anymore? This year could be one of the last times we make such a big hoo-hah about our cousins across the pond exercising their right to vote.

Whoever gets elected will face a number of enormous challenges at home and abroad. Domestically, the country’s political system is more gridlocked than the M6 motorway, and shows little sign of easing up given that the parties have moved to the extremes of their political affiliations. There is also the small matter of their ailing economy. Unemployment is at 7.9 per cent and economic growth still at 2 per cent. There is also the impending ‘Fiscal Cliff’ of tax increases and spending cuts which will come into effect at the end of the year if Congress and the President cannot agree a budget, probably sending the US back into recession. Oh, and the US also has an eye-watering $16,200,000,000,000 of federal debt. People don’t get excited about putting a man on the moon like in JFK’s day; now it’s just about avoiding cataclysmic economic bankruptcy, or default.

Abroad, the US has always relied on its overwhelming military power to project its influence, but as Afghanistan and Iraq have shown, there are limits today to what can be achieved with hard power -even from a state that spent $711 billion on its military in 2011. America has also never really solved its image problem that was so comprehensively butchered by Bush Jnr, despite the best efforts of Obama early on. It is still widely distrusted in the Middle East, and relations have also soured with its NATO allies after 10 years of war and unilateral policies. But the biggest problem the US will face is the rise of developing states such as Brazil, India, and most importantly China. The move to a multipolar world is already underway, and as China’s tentacles spread across more of the globe the US will undoubtedly become more marginalised and have to find ways of staying competitive and as ahead of the curve as it was in the last century.

So if you want an election that actually matters for the future, have a look at the 18th National Congress of the Communist Party of China that begins on November 8th2012. There it is expected that Xi Jinping will succeed Hu Jintao as General Secretary of the CCP before becoming President next year. This is not democracy; there’s no place for those pollsters and analysts that monotonously try to predict a winner, nor the excitement as the votes are counted and revealed. And yet it is at this Congress where the future direction of the world will be shaped, not across the Pacific. The men elected to the Politburo Standing Committee will have power the US President can only dream of, and as their economy and influence increases ever more, in four years’ time we may take a little less interest in who Ohio backs for President of the United States.