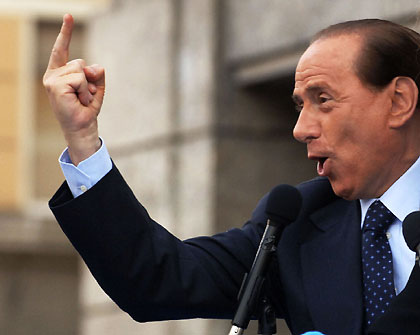 The end of Berlusconi?

The enduring popularity and success of Silvio Berlusconi has often seemed inexplicable from the other side of Europe, given his frequent problems with the law and penchant for affairs with girls a quarter of his age, but here in Italy there remains a significant proportion of the population entertained enough by his antics to support him. In November 2011, a variety of legal battles combined with the economic crisis saw his approval rating drop to a low of 22%, and he resigned shortly after. However, with the technocratic government of Monti coming under fire for what was seen as their inaction, a growing number of people began to return their support for Berlusconi. In my first week in Italy I drove past a large ‘manifestazione’ in support of him in Bologna, a generally liberal city.

Though it may seem strange to many of us in Britain that a politician so frequently accused of tax evasion and fraud, not to mention the allegations of sex with underage prostitutes, would be able to have such a prolonged career. Indeed, at times it has seemed like nothing could damage Berlusconi’s image, with his government surviving 51 votes of confidence between 2008 and 2011 alone. This can be explained quite simply through many Italians view of politics. The overwhelming impression that Italians have of their politicians is that they are self serving and frequently fraudulent. This fatalistic acceptance of, at the very least, manipulation of the system to benefit the politicians makes Berlusconi’s actions unremarkable, enabling him to play on his charisma and media support – he owns several newspapers and television stations – and claim political subterfuge at every accusation.

As for his frequent affairs and use of prostitutes, Italy remains a patriarchal society and a significant section of the populace simply view this with amusement, though both liberal and Christian groups have condemned his attempt to engineer the release of one of his call girls after her arrest.

However, at the end of October Berlusconi was finally convicted of tax fraud reaching €200m, and sentenced to four years in prison. While this was later downgraded to one year, this represents a turning point in his career. No longer can he claim that the charges are politically motivated given his resignation, and though he is unlikely ever to serve his sentence, it is doubtful that he will ever return to the world of politics. Indeed, he has almost admitted as much, claiming that he will now focus his efforts ‘behind the scenes’. Shorn of his attention grabbing leadership, his centre right ‘Freedom People’s Movement’ has dropped ten points behind the centre left ‘Democratic’ Party. Though it might be too much to hope for instantly cleaner politics, Italians are finally beginning to see a future beyond Berlusconi.

Helena is a third year language student, currently on her year abroad.