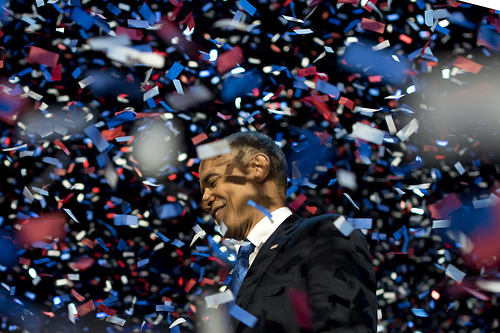 Why Romney lost the election

Despite the economic downturn, high unemployment and low presidential approval ratings, Mitt Romney and his Republicans were unable to secure an election victory or regain control of the Senate. Whilst exit polls indicate that voters viewed that Obama as “more for the middle class”, with Romney tilting to the interests of the rich, many Republicans and conservative commentators are lost for explanations as to why they lost the election. This perhaps presents the perfect opportunity to shed light on what critics from all ends of political spectrum view as an “out of touch” Republican party, which, since the days of Ronald Reagan, has found difficulty in controlling the centre ground.

So, why was Mitt unable to seize the initiative?

A good place to start would be Romney’s, perhaps uncharacteristic, self-portrayal as a “severe conservative” and Tea-Party sympathiser. Romney is actually considered by many in his party to be politically “moderate” – a stance that enabled him to win him the Governorship of Massachusetts, a state considered to be a Democratic stronghold. It seems that Romney’s approach was to tilt to the right to gain support from the more radical voices in his party. These voices called for deep spending cuts to public services, shrinkage in the role of government, the dismantling of Obama’s healthcare reforms, tax breaks for the rich, tough stances on immigration and also a roll-back to women’s reproductive rights. It is fair to say that basing policies around these initiatives severely backfired for the Massachusetts Governor. With many Americans out of work, relying on federal services for income support and struggling to afford healthcare, Republican opposition to this alleged epidemic of dependency on the government (the “47%”) did not go down well with lower and middle income voters – who made the bulk of the electorate. It is true that America have their own deficit to reduce, but perhaps a degree of compassion and empathy on such  issues may have swayed the votes of these demographics and put Romney over the top.

America day-by-day is becoming a more cosmopolitan society. The Republicans have been unable to keep up with this pace and appeal to the rapidly growing minority ethnic communities in America. The only key demographics they continue to win over are white voters – particularly men, aged over 45 and earning over $50,000 per annum. But as America’s minority communities expand, the white cohort continues to shrink. White voters contributed to 72% of the 2012 voters – 2% less than 2008. Some rather disconcerting voices in the party claimed that winning minority ethnic demographics was impossible in the event of running against a party with an African-American nominee. However, many party members have reacted to such voices stating that the party need to re-invent their way of connecting with minority voters, and shift away from a “white identity politics”. Due to the Republicans’ lack of appeal to minority voters, as far as the electoral map is concerned, some “red” states are slowly turning into swing states and swing states are turning into “blue states”. Take New Mexico for example – where Obama won comfortably by 10 points in 2012 and 15 points in 2008; the previous margins of victory in 2004 and 2000 were 0.7% (for Bush) and 0.06% (for Gore) respectively.

However, the demographics that Obama won over were not simply minority voters, but young voters and university educated voters of all races and genders. Romney’s pledge to cut federal support to students and raise tuition fees was not exactly going to guarantee their votes. It seems that the days of the Republicans relying on the votes of wealthy white voters and disillusioned blue collar workers are over. They need to form a wider base that appeals to a broader range of voters.

It does not help your campaign when one of your party colleagues associates rape pregnancies as a “gift from God” in the way that Missouri Senator Richard Mourdock did. It also does not help your campaign when you run a TV ad stating that General Motors are to ship thousands of jobs abroad – a complete falsehood. Romney’s own comments suggested that the Republicans were standing as a party lacking compassion for the vulnerable and those who didn’t fit their right-wing agenda. Romney essentially wrote off “the 47%” of the electorate when he said they wouldn’t vote for him due to their dependency on federal expenditure. Romney missed an opportunity to buy the votes of these “dependents” by challenging Obama’s rhetoric of hope and change in relation to unemployment figures and the fact that many of these Americans were worse off than four years ago.

But you can’t take anything away from the Democrats. They ran a fierce campaign in which they easily held their strongholds of the West coast and North East states. In fact the only states they lost from the 2008 election were Indiana and North Carolina – states that are historically reliable Republican territory. You have to admire how the Democrats did this. Yes, they seem to be much more united than the Republicans, but the key is the broad support base they have in relation to demographics. They campaign as a party that foregrounds inclusivity, civil rights and opportunity – recognising the needs and struggles of the young student who needs federal grants to go to university or the lower income family who can’t afford healthcare. They recognise that the Hispanic population (who turned out in great numbers for Bush jnr.) contribute a lot to the economy and have a very pro-business culture. Unfortunately for Romney, his hardline stance on immigration alienated many Hispanic voters. Also, let us not forget the cultural icons that backed Obama in this election. Having the likes of Bruce Springsteen and Jay-Z on your campaign team is bound to stimulate some of the moderates out there. Also, we cannot forget the man who Obama thanked as soon as Mitt Romney conceded the election – Bill Clinton. It is fair to say that Romney had no such cultural and political currency in his campaign. But are there any such Republicans out there? Mel Gibson? Arnie, perhaps?

With political commentators talking about the 2016 election already, the Republicans need a radical re-structure of their game plan if they are to reclaim the centre ground and challenge the Democrats. I am inclined to agree with Washington think tank leader Will Marshall; what is clear is that a conservative philosophy centred on exploiting white voters’ sense of cultural dispossession is a formula for political marginalisation and is not [any longer] enough to win the presidential election.