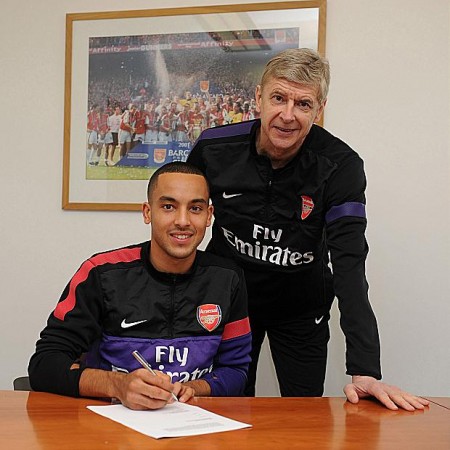 Alongside horrific news stories of Algerian terrorists keeping British nationals hostage and French armed forces battling with Islamists in Mali, the protracted debate over Theo Walcott’s contract extension at Arsenal took many headlines in the British press last week. A trivial issue, you might say. And you’d be right. How does a man, admittedly with a remarkable talent for kicking a bit of leather about, merit similar coverage to that of these monstrosities? But this is our obsession with football, so much so that Walcott’s perceived value is sufficient to earn him, reportedly, in excess of a reported £100,000-a-week.

I’m not going to argue whether Theo is worth the money – he isn’t – but beneath the grandeur of such a figure lies a much darker reality.

Since Charlton Athletic became the first against the wall in 1984, in excess of fifty Football League clubs have filed for administration due to insurmountable levels of debt. On the surface it appears a genuine, if somewhat tragic outcome, and one that many other businesses can relate to, especially with ongoing issues across even big high street names. Struggling to pay creditors alongside dwindling incomes is not an unfamiliar story. But unlike the rest of the business world, football lives by its own rules.

Both fans of football and fans of news will be aware of Portsmouth’s financial plight over recent years; FA Cup winners in 2008, they have tumbled through the divisions after two spells in admin, and teeter on the brink of a third. They are a club in turmoil, misled by a succession of chairmen with apparent business acumen and on each occasion deemed suitable to run a football club by the Football League’s ‘fit and proper persons’ test.

Preceding that FA Cup victory, Pompey had spent big on big name signings; three England regulars joined the ranks, as well as a number of expensive foreign imports. By July 2008, the club had spent £70 million in transfer fees alone over three-and-a-half years. More worryingly, over that period the club’s wage bill ballooned to sixty percent of turnover, with the club’s revenue already severely limited due to their small stadium and non-existent corporate facilities.

Portsmouth made history as the first Premier League team to enter administration in February 2010, carrying debts of over £80 Million. By this time they had passed into the hands of Balram Chanrai, who inherited the club after non-repayment of an £18.6 million loan to the previous owner. Keen to secure his investment, he mortgaged both the club and stadium through his own company shortly before their receivership, ensuring every penny of Chanrai’s money remained safe. The club was moved under a new company, owned by the man himself, and a CVA of twenty pence in the pound was agreed to pay the vast debt to creditors.

This is where the awkward secret becomes apparent. While the small businesses, local ambulance service and a number of Portsmouth schools all received a pittance of what they were owed, ‘football creditors’, namely players, staff and other clubs owed money were paid in full, under Premier and Football League regulations. £22.4 million went to those in the football fraternity, while of the £88.3 million owed to ‘non-secured’ creditors, large sums of the twenty percent compromise remain unpaid to this day. While David James, Kanu and Peter Crouch, all players with illustrious careers and huge personal wealth shared an eight-figure sum between them, several local businesses were instead forced into liquidation, unable to absorb the relative magnitude of unpaid debt.

It’s a sickening thought, but it’s one example of many. When Plymouth went into receivership in 2001, the agreement through the CVA was less than one percent. Administration became such an easy way out for clubs with any financial issues that the Football League imposed a ten-point penalty as a deterrent in 2004. It hasn’t worked. Chanrai kept his money, and kept his club. What does he care for the man on the street?

UEFA’s Financial Fair Play system is looking again to address the issue, but the punishments don’t go far enough; 5 clubs have already been banned from European competitions next season, but domestically they remain unscathed. Football cannot continue treating everyone else with such blatant disregard with no thought of what might be around the corner. Punishments need to be more meaningful, and the football creditors rule needs to be scrapped as a matter of urgency.

Ron Walker is a Butler alumnus, currently working as a sports journalist for jack fm and the breeze.