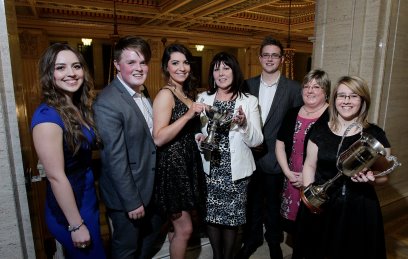 No region or country in the world is without its own troubles, and this is especially true of Northern Ireland. The Troubles which erupted in the 70s and 80s are painfully remembered by many who served in the area or had to live in the midst of the violence. This is why the recent wave of violence, which erupted over Belfast City Council’s decision not to fly the Union Flag every day of the year, has been so shocking and disappointing to us all.  However, it is all too easy to lament the images of reckless violence and devastation caused by a few, and forget the every day actions, opinions and beliefs held by the majority which reflect the true spirit of the country, and have created a post-conflict society which has come so far and achieved so much.

The road to peace in Northern Ireland has never been smooth or without disappointments. Serious setbacks have been discouraging along the way, such as murders of individuals in the security forces, illegal and often violent protests, and death threats issued against those who try to move our society forward. The recent flag violence is no exception. The images of youths (the worryingly young age of protestors has been well documented) battling police forces who struggle to keep control over an emblem such as a flag are alien to most. But what has to be realised by politicians, the media and people from around the world, is that a simplistic religious or sectarian rationale no longer explains the anger and aggression on the streets, and is at very best, a mask for common post-conflict problems which Northern Ireland is yet to fully overcome.

The areas that have seen violence recently, especially those in Belfast itself, are working class Unionist areas (supporting the union with Great Britain, and almost wholly Protestant) where levels of unemployment, crime and poverty are at an all-time high. Their frustration is not simply because of a compromise on emblems such as flags and symbols of their ‘Britishness’ but due to every day policies of housing, welfare and employment. It is failure in these areas that is most damaging to Northern Ireland. It causes both Unionist and Nationalist communities to retreat to entrenched positions, and to cling to the emblems which represent the prosperity and national identity of the past. This leads them, inexcusably, to use tried and tested methods of sectarian violence to channel their frustration and anger. These volatile situations still exist in Northern Ireland because there is an obvious void in politics for debate over real issues and policies, as they have never been of pressing importance before.

Political campaigns in Northern Ireland are still mainly fought along cultural and religious lines. Nationalists (who wish to break the union with Great Britain and see a united Ireland and who are mainly Catholic) vote overwhelmingly for one of the two Nationalist parties, whilst Unionists vote almost wholly for the two Unionist parties. Such voting ignores the usual left/right wing divide, which is a major and worrying flaw. It is because political parties in NI are still recognised as Unionist or Nationalist, rather than the traditional socialist or conservative groupings, that people do not feel the benefit of their democratic vote. This is a pressing issue of concern in Northern Ireland, as the petty political point scoring of one side against another, drags us back into a divided and segregated society.

However, quite often in spite of the volatile political situation, the people of Northern Ireland are making real changes to their divided community. What has made the recent violent episode in Northern Ireland different from those played out every day of The Troubles has been the attitude of the ordinary people in the country. No longer do violent acts scare people into silence, or even support for illegal organisations, but instead inspire cross-community condemnation of the individuals, and a demand for politicians to do more to ensure that peace remains a guarantee. The best thing that the peace process has brought to Northern Ireland is a determination and a pride in the ordinary people to make their country work.

For example, the flag violence inspired a mass ‘Backin’ Belfast’ campaign to attract shoppers back in to the city centre to try and recoup some of the losses suffered by retailers over the Christmas period. Up and down the country, politicians, community leaders and ordinary people have not shied away from denouncing any violence and demanding repercussions from those who have caused it.  People should never underestimate the importance of pride in one’s country, culture and fellow citizens, which is something years of conflict robbed the country of completely. This is something the people of Northern Ireland have reclaimed, and are willing to stand up to extremists, on either side, to maintain.

It is in post-conflict situations such as this that organisations started by local people can do the most in their community. I have had the privilege to work with Kate Carroll on one such venture for the last 4 years. Kate’s husband Steve was a serving PSNI officer who was murdered by republican terrorists when responding to a hoax call, made to lure him in to the area. Steve was from my hometown and the first member of the security forces to be murdered since the groundbreaking Good Friday Agreement in 1998. Every individual in Northern Ireland and beyond felt the effect of his death. Kate, for me, represents the new outlook of Northern Irish people, who are determined for their voices to finally be heard over those of terrorists who have silenced them for too long. Rather than fuelling further hate, revenge and violence, she chose to dedicate herself to educating young people about the dangers of sectarian violence, and the devastating consequences that can come from such blind hatred. Reactions to violence such as this are a true representation of the attitudes and spirit of the people of Northern Ireland today.

When people ask if Northern Ireland is ever going to change, I answer that it already has. There will undoubtedly be more disappointments and setbacks in the future for Northern Ireland, but the changes we have already made are huge, and ought not to be forgotten. The will of the majority to see our country prosper, and to create a place we can all be proud of, will always triumph over lawless individuals who try and drag us back to the past.