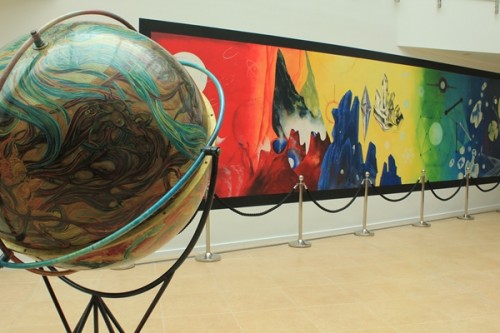 Art as an investment and other thoughts

Attending the Butler Scholarly Journal Discussion Forum on the use of public art in universities was a provocative and invigorating experience which, it seems safe to say, certainly challenged some of the opinions originally held by a good number of those in attendance. I went to the event expecting, perhaps, to listen to a number of somewhat defensive talks intended to justify Durham University’s recent hotly contested £1.4 million spend on purchasing and installing works of art as part of the Gateway Development programme. However, the talks given by Durham University’s Dr Hazel Donkin (Department of Education) and Alan O’Cain (Artist in Residence, Ustinov College), as well as the subsequent discussion amongst all attendees, gave me a fresh perspective on the issue of Durham’s expenditure on art – and on the use of art in universities more generally.

Alan O’Cain shared with us six reasons why art in universities is good and justifiable. The one reason which particularly stood out for me was the idea of art is an investment – something that had not crossed my mind at all. As was discussed after the planned talks, Durham University frequently invests money into banks, so why the outcry over an investment in the form of purchasing artwork (Archie Dallas, Durham Student’s Union President, called the expenditure a ‘total disgrace’)?  If the purchase was, indeed, an investment to a considerable extent, then it seems much more justified; though some who attended the Forum voiced the opinion that the money could have been better spent on student bursaries or improvements to the buildings at Elvet Riverside, if the University had planned to invest a certain sum of money in artwork to address its future needs – just as it does on a regular basis in other, less visible, ways – then there seems little cause for outrage.

Nonetheless, the fact that the University spent close to five times its original budget of £294,000 on this artwork seems to indicate that the expenditure certainly cannot be wholly considered a planned investment and, given the wide range of areas requiring funding and support across the University, some of the money could likely have been put to better use. Further, much of this controversial art is housed in parts of the Palatine Centre which students are not permitted to access unless on a guided tour and its relevance to the student body and the University in general is a little unclear. Most students around the university seem unsure of how the particular artworks purchased are relevant to Durham.

Those who attended the Discussion Forum were fortunate enough to find out a little more about the somewhat discomforting sculpture outside the Bill Bryson Library – Fenwick Lawson’s ‘Cry for Justice – The Scream’, one of the new pieces of artwork which students are able to see and interact with without going out of their way. This sculpture has received some criticism and negative comments from students due to its arguably depressing subject matter; it was inspired by victims of the Vietnam Conflict. However, at the Discussion Forum it was acknowledged that, as well as being situated outside the Bill Bryson Library, the sculpture is directly outside Durham University’s Human Geography Department and therefore has clear connections with that Department’s concerns. Further, attendees considered that, whilst the sculpture is certainly not uplifting, it does provoke contemplation amongst Durham’s students and staff of what a privileged position they are in as members of such a successful and special University, compared to others around the globe and at different historical moments. Subsequent discussion indicated that those attending felt more interested by, and accepting of, this sculpture having been exposed to some fresh perspectives and insights relating to it.

One thing that the Discussion Forum certainly highlighted was the benefits and importance of actually talking about Durham University’s new collection of artwork. What was especially notable during the event was the lack of knowledge amongst the majority of students and staff pertaining to the art; Dr Hazel Donkin’s speech drew attention to the fact that there was not originally a plaque to accompany ‘Cry for Justice – The Scream’, and this seems  symptomatic of the trouble surrounding the acquisition of the artwork in general. It seems that, if staff and students were more informed the artwork – its relevance and its utility – then they would, on the whole, be significantly more accepting of it. However, the University was not especially transparent about the acquisition (Palatinate spent five months trying to uncover the actual cost of the artwork), and there is almost no mention of the works of art on the University’s website.

It might be beneficial, for example, for there to be certain webpages on the University website showing pictures of select pieces from the collection accompanied by short excerpts explaining the pieces and their relevance to Durham. The University now houses the largest collection of twentieth-century artwork of any university in the United Kingdom and, as some form of an investment and a collection that serves to raise the prestige of the University (amongst other benefits), more could be done to raise awareness about the collection and its relevance to the Durham community as a whole. It seems a shame that this impressive collection still remains controversial and misunderstood for a great majority.