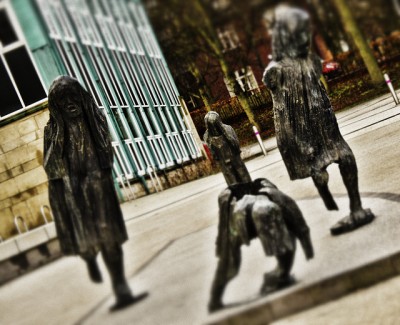 Both speakers discussed Fenwick Lawson’s ‘Cry for Justice – The Scream’ sculpture, which sits between the Bill Bryson library and the Geography department. Prior to the speaker’s talks, I was far for the sculptures biggest fan. Although I was vaguely aware of its connections to the Vietnam War I felt that, due to the lack of information provided about the sculpture, it could easily be misinterpreted. I also felt that it was in an odd position in the University, as quite frankly the last thing a student wants to see after a long day in the library is distressed looking figures. However, after hearing what both Hazel and Alan had to say about the work I began to see it through fresh eyes. Firstly, I knew very little about Fenwick Lawson and his connections to the University, and learning more about the artist therefore made me reconsider the work. Additionally, learning that the sculpture actually belongs to the Geography department rather than the library clarified the chosen position for the piece – as the Vietnam War has obvious connections to Human Geography. What my change of opinion really clarified for me is that art often needs to be explained in order to be truly appreciated – we need to be more informed about a piece’s origins and its message in order to developed a balanced opinion.

Having appreciated the sculptures between the the Bill Bryson Library and the Geography department as good art poorly placed (who wants to see something depressing after a rather lack luster attempted at some revision in the library), I didn’t expect to come away from the discussion with was the opinion that they are, in fact, in exactly the right place. The art, based on both topics of human Geography and on Bill Bryson’s continued graduation theme of how lucky we are compared to others, seems entirely appropriate.

Alan O’Cain described artists as people that ask questions and don’t answer them. This lead to the discussion that sciences is an art in a precise form and how art is relevant to all our degrees and that that is why the university should invest in it. This was something I disagreed with; scientists ask questions but then answer them. To a scientist, there is nothing for annoying than an unanswered question. The reason the university should invest in art is not because it is relevant but because it is not. The university is here to educate us and further our knowledge and not just in our own degree. Art covers many topics and areas; finding art that is not in your degree is far more common than finding art that is. The art is there to spark discussion and encourage us as student to look around us and not just in our field of study.