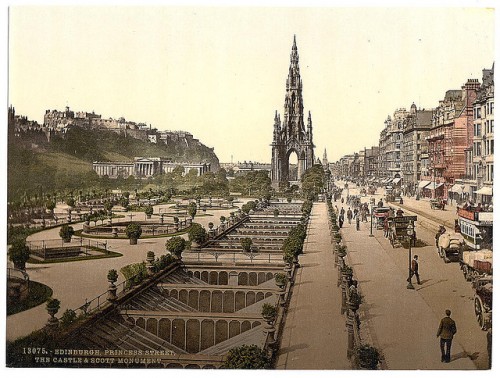 Scotland has been part of the United Kingdom since 1707. On 18th September 2014, citizens will have the chance to vote on whether Scotland should become an independent country in its own right, but opinions on the subject are polarised. Here, two Butlerites present either side of the argument for Scottish independence, a debate which has divided the nation.

In this conflict of sneering demonising and contrived one-upmanship, where one “camp’s” mantra is fundamentally petulant fear-mongering, and the other’s fundamentally naïve uber-nationalism; rationality and objectivity is a myth. It’s incredibly difficult to find truth and reason in the environment of perpetual spin which exists between #BetterTogether and #YesScotland. Nevertheless, for those voting in September elucidation is essential in determining Scotland’s future. Hopefully I’ll be able to provide some form of clarity behind my reasoning in voting yes to an independent Scotland.

The first, and probably most important, point of discussion is the ambiguous future of Scotland’s infrastructure. An independent Scotland’s economic system would do well to model itself on Norway’s; a small nation completely self-sufficient, and with a budget surplus of 13.9% . Despite being routinely condemned as a drain on the UK, numerous reports suggest the contrary and that if anything, Scotland’s economy would grow if independent. In 2011-2012 Scotland provided 9.9% of public sector revenue and received 9.3% of expenditure showing that Scotland are a net contributor to the UK. Furthermore the GERS report purports that Scotland has a lower deficit (5.4% of GDP) and lower public spending (42.7%) than the UK (8.5% and 45.5% respectfully) .The Sunday Times reported that being part of the union has cost Scotland £64 billion in debt interest over the last 30 years. The strength of Scottish exports is naturally imperative to our future; our whisky exports alone were valued at £4.27 billion in 2013 and our investment in chemical manufacturing, computer products and finance would be instrumental if the country was independent. This leads us to the North Sea oil. There are between 15-24 billion barrels left which will last decades , with the SNP promising that over 90% of the tax revenue will contribute to establishing a national oil fund similar to Norway’s. Better Together argue that Scotland’s future would be compromised when the oil runs out. Thankfully then, Scotland has outstanding potential in renewable energy, representing 25% of Europe’s tidal potential, 25% wind energy potential, 10% wave energy . This should indomitably lead to comprehensive reindustrialisation across our rural areas. Ernst & Young categorised Scotland as the most popular UK destination outside of London for global investment, and the uncertainty over the referendum has in fact impelled an increase in inward investment.

Secondly, and for many the most bitterly triumphant consequence, independence would signify a permanent escape from the Conservatives. The mutual resentment shared between Scotland and the Tory Party is well documented. Thatcher’s decade-long battles with the miners’ and shipyards’ unions devastated Scotland’s, and particularly Glasgow’s, primary and secondary industries, causing mass unemployment, poverty and depression . This was symbolised most tragically by the demolition of the iconic Ravenscraig steelworks in 1992 . Scotland has long been treated by Westminster like a policy guinea-pig; the implementation of the Poll Tax in 1989 a year before the rest of the union, the deployment of Western Europe’s largest nuclear arsenal 30 miles from Glasgow , and to a less harmful but no less divisive extent, 2006’s smoking ban . The most alarming aspect is that Scotland has only the most miniscule say in general elections. In 2010 the Conservatives won the most seats (306) despite them only taking one Westminster seat for Scotland . The agonising truth is that compared to the affluence and influence of South-East England, Scotland’s political impact is brutally limited. As a predominantly working class, left-leaning nation, Scotland’s politics is at odds with Westminster’s. The recent lie that we’re ‘all in it together’ in austerity only serves to accentuate the increasing inequality between the established middle classes and working classes; the MPs’ 11% pay rise is hardly in accordance with ‘bedroom tax[es]’ , severe welfare cuts and the privatisation of our healthcare and education . An independent Scotland would never again suffer a government it didn’t vote for, or a government wholly antipathetic to its interests.

The most significant factor behind my personal vote, and the simplest, is our inherent right to national self-determination. Scotland is a nation, not a province or a county. The concept is extraordinarily modest; if we truly believe ourselves to be a nation, then we should govern ourselves as such. Almost every other country in the world is self-ruled, so why should we be any different? In my honest opinion, every other issue is secondary.

Devolution isn’t, and never has been, enough. Scotland is being given a remarkable gift; the opportunity to control our own taxation and regulation, the opportunity to be administrated by the government we voted for, and the opportunity to assert ourselves as an international actor. The notion of post-unionism is daunting, but also tremendously exciting. If we really are ‘the best wee nation on earth’, it’s time to prove it.

No: Claire-Louise Scott argues that Scotland should remain part of the UK…

Since the formation of the Scottish parliament in 1999, Scotland has flirted with the idea of independence – making it on our own; being self-sufficient and making it work; and (a ‘Braveheart’-esque) freedom from Westminster. But to say Scotland – only fifteen years into devolution from a centuries old union – knows exactly what it is getting itself into, is a farce. Scotland should not become independent because it is being cruelly misled by a ‘yes’ campaign promising unicorns and rainbows instead of facts and figures. The Scottish National Party’s recent White Paper outlining the key issues surrounding becoming independent was little more than a 670-page glorified manifesto which had more than a few pages missing. The misinformation lies in a number of crucial areas, not least in terms of pensions, currency, and European Union membership.

Firstly, I will turn to the question of how pensions will be affected by a ‘yes’ vote. Scotland, like many developed nations, has an ageing population – the number of elderly people living in Scotland is expected to rise by over half a million in the next few decades . However, the SNP are yet to explain how they propose to finance their state pension plan. In a leaked memo to the Scottish Cabinet, the Finance Secretary John Swinney admitted they did not yet know how the state pension would be funded, despite already making promises to voters about its benefits . Scotland’s spending on pensions will only increase in the future, since the population is ageing faster than in the rest of the UK and there is also an estimated company pension shortfall of £170billion that will have to be dealt with the day after independence . But Swinney is yet to give a clear honest answer about where any of this money is coming from. As the saying goes, ignorance really is bliss.

Furthermore, the problem of currency in an independent Scotland is much larger than the nationalists grasp. In November 2013, Alex Salmond, Scotland’s First Minister, promised an independent Scotland would use the pound . Not only have Westminster not agreed to this, but Mark Carney, the governor of the Bank of England, is yet to even meet Salmond to discuss the issue. Alistair Darling, the former Chancellor and leader of the Better Together campaign, pointed out that the pound “is a monetary system underwritten entirely by the UK government. It’s not an asset to be shared like the CD collection after a divorce” . Needless to say, a ‘Plan B’ for currency was one of the notable missing pages from the White Paper.

Finally, Scotland’s EU membership has been a fundamental concern from the beginning of the independence campaign. The SNP continue to promise that after a ‘yes’ vote, Scotland will be able to gain entry to and negotiate a position within the EU in the 18-month period before Scotland would become independent in 2016. However, key figures within the EU have already pointed out that Scotland would have to enter a separate application like any country wishing to join, and it would join the back of the queue . What does that imply for trade, or for the farming subsidies the EU provides? The ‘yes’ campaign once again have no answer and the arrogance with which they assume they will be calling the shots and getting special treatment from the EU sums up how blind they are to this issue.

Without the UK, Scotland is merely another small country in Europe, and will not have the kind of influence or significance they have been spoiled with over the years. The rest of the UK will only look weaker too. You don’t have to search too far to find endless lists of examples and quotes on how strength and success come from unity, and never discord. If strength is in unity, then success is in the UK, and we can all be better together.