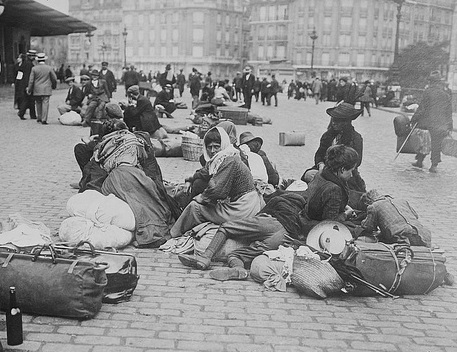 Longing for “Home”: A Critical View of Asylum Seekers.

“I long for home, long for the sight of home.” – The Odyssey, Homer

At the core of our collective imaginary, lays the image of the exile and their transformative journey in search of a place that can offer some type of emotional and spiritual stability; a place we call, often not sure of what we mean, “home”. Whether it be Odysseus battling against the inclement Aegean Sea or Moses leading his people across the never-ending Sinai, our culture appears to be obsessed with the expatriate, that person who inhabits the “liminal”, who is neither here nor there. Forced migration has been a recurrent theme throughout human history but, as the world has become more interconnected, it has acquired a broader social and political scope. The conflicts of the 20th century reiterated the urgency of this issue and placed it at the forefront of the political agenda; it became clear that forced migration is a direct reflection of the global political climate and that, therefore, it pertains the whole international community. We can see, then, that both the political and the subjective are here inextricably related: asylum seeking is as much about the search for sanctuary as it is about the personal process of integrating into an alien society. The following article will attempt to briefly overview both aspects, using the UK as its main reference point. It is beyond my skill to produce a thorough analysis of this phenomenon but I hope this short introduction serves to spark the reader’s interest in it.

A critical view of asylum seekers should begin by outlining their particular social and political characteristics. A refugee could be aptly defined as an individual, who is forced to seek residence in a new country because their country of origin ceased to offer them the safety required. The fact that the migration is forced rather than voluntary entails a myriad of socio-political implications. This type of migration, for instance, is not likely to occur systematically but rather sporadically and often in response to a large-scale conflict. Such conflicts affect the totality of a country’s population and, therefore, even if the asylum seekers come from the same nation, refugee groups are usually heterogeneous; they tend to encompass individuals from different ethnicities, regions and social classes. Also, due to the fact that forced migration occurs unexpectedly, refugees are less likely to make an informed decision about their final destination. Contrary to the fallacious argument that the British welfare state attracts asylum seekers, research has shown that the final destination is often more a product of urgency rather than calculated choice (Kelly; 2003). Moreover, as a result of sudden migration, family and friendship ties are sometimes broken and asylum seekers often arrive to the welcoming country without the support of congenial relationships.

The fortuitous nature of asylum seeking, combined with the heterogeneity of the migrating groups, makes the creation of “community” and a sense of “home” incredibly difficult. Subjectively, it is also problematic for the refugees to forge a new notion of “home” because, inevitably, the narrative of asylum seeking is “tinged with the discourses of return” (Brah; 1996). Added to this, is also the loss of social status; forced migration does not discriminate between different social classes and it is almost always associated with downward mobility. It is within the context of all these social and subjective conditions that a process of integration, of “community” creation, needs to takes place. The UK’s policies of integration are based on notions that could be vaguely associated with multiculturalism. Multiculturalism could be described as the possibility to immerse oneself in the pre-existing social structures while, at the same time, maintaining one’s previous cultural baggage. Many scholars argue that the successful integration of asylum seekers depends on the policy makers’ capacity to identify those specific characteristics that distinguish refugees from other type of migrants. Whereas notions of “community”, for example, are usually very effective among labour migrants, whose systematic migration has generated large social networks, they can be counterproductive when it comes to dealing with the heterogeneity of refugee groups (Kelly; 2003). Out of this assertion of the uniqueness of asylum seekers, a pertinent question arises: how, then, are refugees capable of gaining a sense of belongingness?

The data gathered by empirical researchers and by independent organizations like “The Regional Refugee Forum” suggests that the main ways of empowering refugee communities are through employment and language. It is important to remember that many asylum seekers had established careers in their countries of origin and that they did not decide to migrate for economic reasons. As a consequence, lack of employment, accompanied with dependence on the state, can be deeply demoralising. Many asylum seekers are actually the diametrical opposite of the “benefit scrounger” stereotype, which is sometimes bestowed on them; they are actively trying to become contributing members of society. As a response to the group’s complaints, the government argues that giving asylum seekers the opportunity to work would only incentivise more immigration; this is, as we have seen, contradicted by most of the research done in the area. Language and communication are also crucial aspects of the integration process. If the newcomer lacks the capacity to interact, at least at the most basic level, with the external, pre-existent structures, the promises of multiculturalism become empty. Independent foundations, like The Regional Refugee Forum, however, offer not only language lessons but also social networks of support. Once individuals are able interact with their environment, a successful integration is more likely to occur. It is possible to state, then, that in order to create a sense of “home” refugees need to be able to feel “familiar”, i.e. to work and communicate like any other member of society; at the end of the day, asylum seekers are, as O’Neill and Spybey (2003) put it, “ordinary people who have been through extraordinary experiences”.

Sadly, asylum seekers not only have to overcome the subjective and practical difficulties of forced migration but they also have to face the negative stereotypes that are so deeply ingrained in British culture. The sensationalist media and the manipulative politicians have created a distorted image of asylum seekers, which in turn has generated, among a large number of Britons, an unfounded hostility towards immigrants in general. A study conducted in 2011 showed that a big part of the British population tends to greatly overestimate the proportion of the “refugee problem”: in reality, less than 10% of the migrant population consists of asylum seekers and the UK houses approximately only 3% of the world’s refugee population (Cheung and Phillimore; 2013). This attitude of disbelief, prominent among certain political groups, has resulted in a focus on restriction policies, whose validity is now being questioned by the humanitarian crisis in Syria. Although the UK’s aid in the region has been undoubtedly generous, its response to the refugee problem has fallen short. The UK is one of the countries that have refused to sign the UN plan to relocate the modest sum of 30000 of the most vulnerable refugees across 30 developed countries. We are not talking here about calculating immigrants in search of a better-remunerated job; we are talking about individuals, who have been so deeply affected by the conflict, that they are not likely to survive in the conditions of a refugee camp. The disparate way in which the word “immigration” has been used, to fit particular political agendas, has created an atmosphere of confusion and disbelief, which is now causing Britain to fail in the face of one of the largest humanitarian crises of the last 20 years.

This is precisely why critically evaluating the uniqueness of this type of immigration is so deeply important. When we fail to distinguish the particular social implications that the different types of immigration entail, the best we can do is to create short sighted solutions, which collapse at the times when we need them the most. Like in the Odyssey, forced migration is a symptom of wider social issues in which we are all involved; when the prince, dressed as a beggar, knocks at your door, will you show the hospitality needed? As a holocaust refugee once said: “It’s about how you treat those to whom you owe nothing” (as quoted in Kushner and Knox, 1999).