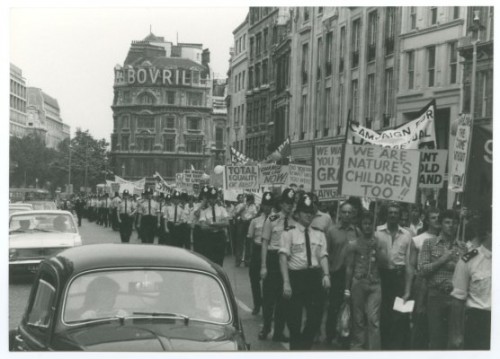 To quote a line from Lily Allen’s song ‘Hard out Here’: ‘Inequality promises that it’s here to stay. Always trust the injustice ‘cause it’s not going away’. When considering homophobia on an international scale, just how much can one read into these lyrics?

Countless stories of homophobic and transgender abuse litter the headlines of mainstream news every week. Although the numbers of these types of crime classed as ‘homophobic hate crimes’ are falling, they are becoming increasingly publicised in today’s society. A 2013 survey by Stonewall has reported that one in six LGBT people in the UK (630,000) identify that they have been the victim of a homophobic hate crime over the past 3 years (1). Homophobic hate crimes come in many guises, whether this is verbal abuse, abuse through social media, physical – or even sexual – assault, with one in eight of the above victims experiencing unwanted sexual contact(1). One very recent more shocking example is the ammonia attack on three young gay men in Vauxhall in London. Police are still searching for the man believed to have sprayed concentrated bleach into the faces of the victims. One of them, aged just 23, has been warned by doctors that he could lose his sight forever (2). These more extreme cases of violence are rare, but even something that may seem petty such as name-calling can ruin an LGBT person’s confidence.

What is even more shocking than the crimes themselves is the fact that over two thirds of those people that experienced a hate crime did not report it to the police (1). This may primarily be due to the fact that they fear further attacks if they do report an incident. Moreover, half of those that are reported do not result in further action (1). It is this blind acceptance of homophobic behaviour by a few that is causing the LGBT community to lose faith in the system. More often than not, the abuse itself is carried out by a stranger (1) and in half the cases reported, the abuser is under the age of 25. It is concerning to think that there is a growing seed of intolerance amongst the younger generation.

This poses the question: what are the causes of hate crimes? The obvious answer would be ignorance. As a young gay man myself, I have been asked questions such as ‘So when did you choose to be gay?’ , my response being one of disbelief that someone could believe I had just flicked a switch one day and chosen to love all things Madonna. It has long been known that there is an LGBT stereotype, yet, it still shocks and appals some people when those who don’t fit this image are LGBT. The increasing obsession of society with regimenting and placing people in categories is becoming a serious headache for the LGBT community, which accepts diversity and embraces differences.

The UK, however, is one of the world leaders in equality and diversity, having passed the same sex marriage bill earlier this year in March, which allows homosexual couples marriage rights equal to those held by their heterosexual counterparts (3). As well as this there are many education initiatives in schools and universities to educate people about issues which LGBT people face, such as the charity Educational Action Challenging Homophobia (EACH) which provides packs for teachers so that they can spot the signs of homophobic behaviour(4). This is a huge leap forward for the LGBT community in the UK and is a great sign for future development.

The UK is one of only 16 countries in the world that allows individuals the freedom to marry, regardless of the gender of one’s partner. Others, such as the USA, do allow regional freedom to marry, but homosexuality was only decriminalised across the whole country in 2003(5)(6). The vast majority of the world is sadly enswathed in laws which make being LGBT an imprisonable offence in 70 countries and an offence punishable by death in 5 others (7). Some recently instated laws include: a draconian 153 year old law passed in India which classes sex between two consenting same sex adults as ‘unnatural’ and makes it punishable by 10 years in prison. In Mauritania, any Muslim man who commits a same sex act will face death by public stoning (8). One country that has come under most of the world’s watchful eye is Russia, which quietly passed a controversial propaganda law banning minors from seeing anything that portrayed same sex relationships as ‘normal’ (9). From an ignorant surface view this may not seem like it would cause a large amount of despair for those that are already consenting LGBT adults. On the contrary, the realistic situation for anybody who is LGBT in Russia is rather Kafkaesque (9), with violent attacks on members of the LGBT community being carried out daily by hate crime gangs, for example in 2013 a 23 year old Russian was brutally raped and murdered for identifying as gay(9). It is a rather foolish stance to just discuss countries that are in the media when considering homophobic crime and behaviour on an international scale. Countries such as Jamaica have a deep-rooted homophobic problem, where there have not been any laws set out to protect or condemn being LGBT. As a result, LGBT members of the community face serious persecution as in the case of Dwane Jones, a 17 year old cross dressing man who was stabbed and chopped to death by a mob(8).

Comparatively, it can be seen that the UK and a handful of other countries are working towards a united front to stand against homophobic crimes. Writing from personal experience, and considering the statistics presented here, I have been very privileged to have the people around me accept me for who I am, having to deal with very little homophobic abuse. Unfortunately this is still not the case for many. Millions of LGBT people live in fear across the world and are persecuted daily for being what is only natural to them. In reality, all of us are the same under whatever image we project into society, so why should that be one of intolerance and hate?