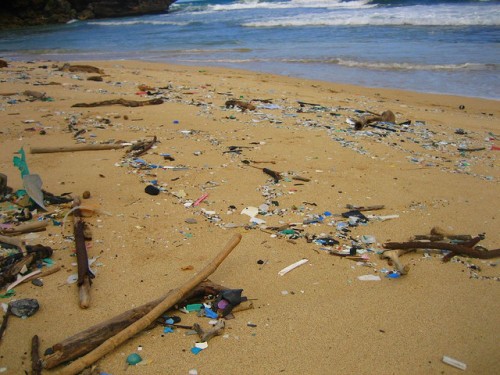 Playing with fire? Entering the Anthropocene

Is human activity really altering the planet? Geologists have been attempting to show how anthropogenic influence upon the environment can be recognised in the rock record, and it seems that significant evidence is beginning to emerge.

In early June 2014 scientists reported finding rocks made of plastic on a Hawaiian beach. These ‘plastiglomerates’ most likely formed from melting plastic in fires lit by humans which, once fused to denser materials like rock and coral, sink to the sea floor. Burial and preservation may create a geological marker and provide further evidence for the debate surrounding the transition into a new, human-dominated period of Earth’s history referred to as the Anthropocene epoch.

But are humans really powerful enough to change the world? As a planet the Earth is ultimately under orbital control, but the interactions that create the world we live in rely upon the maintenance of a dynamic system balance. There is question as to whether the extent of human alteration has been enough to push this balance toward a critical threshold, and to warrant the beginning of a new geological epoch.

An epoch can be defined as a span of geological time, with each epoch reflecting a unique period of Earth’s history. The unprecedented rate of environmental change attributed to human activity has led to the development of the term ‘Anthropocene’, coined in the 1980s by Stoermer, to indicate a transition from the current stable Holocene epoch to ‘the recent age of man’. At present the Anthropocene has no precise start date, but has been considered to start with both the Neolithic and Industrial Revolutions around 12,000 and 200 years BP respectively.

Humans have significantly impacted upon Earth’s biodiversity, climate and elemental concentrations since Homo erectus began to exploit environmental resources through the controlled use of fire some 400,000 years ago. It is the lack of a geological analogue for current rates of change that has attracted attention regarding extent of human impact. Temperature and carbon dioxide levels are of primary concern with relation to ‘global warming’, and the disruption of biological and geological cycles are changing the way water moves around the globe. Virtually no place on Earth is left untouched by human activity and almost all the planet’s ecosystems have been affected. So how are we doing this? Agricultural techniques, land subsidence and groundwater pumping, coastal management and deforestation are just a handful of the alterations that are creating a hotter, stormier and less diverse planet. The significant risk of ice sheet collapse is one prominent example of an irreversible change that humans certainly, and the planet probably, cannot recover from.

Scientists have suggested nine critical boundaries we need to stay within to avoid unacceptable environmental degradation with serious consequences for societies, and we are close to or beyond at least four of them. Through the crossing of tipping points related to ozone depletion, climate change, biodiversity loss and nutrient pollution, it will now be easier to cross others and create a cascade of changes that may lead our species into extinction.

The environment has a limited carrying capacity, and relative overpopulation is the root cause of civilisation collapse. Diamond (2005) outlines five major factors inherent within many historical examples of collapse: climate change, hostile neighbours, collapse of essential trading partners, environmental problems, and failure to adapt to environmental issues through cultural response. Ultimate collapse is usually related to dependence upon water supply and resources, with drought being a predominant cause. This is of significant current concern with relation to the US Dust Bowl and the huge economic and social losses associated with crop failure. However, as globalisation has led to the creation of one large civilisation, the lack of historical analogue makes prediction of societal response near impossible. Perceived human domination over the environment continues to grow alongside the current technological revolution, but how strong is our resource base? Beginning with the agricultural revolution, exploitation led the development of mankind. However, we now exploit both our environment and our own species. Such ‘cannibalism’ has been a feature of many historical civilisation collapses, and may suggest that we have passed our peak.

It must be remembered that we are simply one subsystem of the Earth and our behaviour may only be tolerated within a certain range. Past civilisation collapse such as that of Easter Island and the Maya civilisations have demonstrated the role of the environment and climate within societal dynamics. Stresses lead to political and economic collapse, with significant social stratification. Hence, anthropogenic changes may cause environmental and consequential social stresses. Stratification may then result in a strong elite divide on a larger scale than has ever been seen before, with emergence of religious and cultural cults as resources dwindle.

Perhaps we have shot ourselves in the foot by attempting global integration and overlooking the power of our co-systems such as the ice sheets and the oceans. If a related critical threshold is reached, Earth may experience the greatest mass extinction in its history. Hence, it could be our failure rather than our success that that marks the end of the Holocene and the beginning of a new geological epoch.