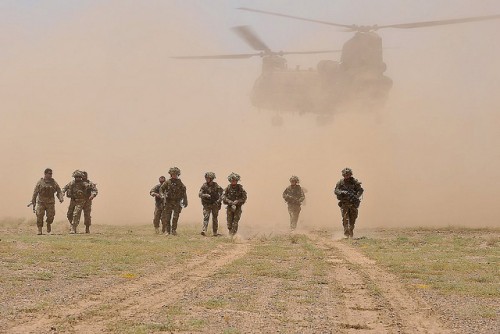 The Irresistible Illusion of Success: Has Britain Learnt Anything From Afghanistan?

On 16 January 2015, the last Victorian died. It is an incredible idea that at the start of 2015, Ethel Lang, who was born a subject of Queen Victoria, was even alive. During the course of Ethel’s life there have been many game-changing historical events: the founding of the British Labour party, two World Wars, the production of atomic weapons, and the invention of the Internet, Facebook, and the iPad, to name but a few. Thus, it is no wonder that crinoline-clad Victorianism in the present day feels alien. This feeling, however, is illusory. The Victorian era should not be compartmentalized into a static pocket of history; Victorianism is still relevant today.

The Victorian legacy in modern society is largely benign; we have the Victorians to thank for our inordinate love of Christmas and the ‘Big White Wedding.’ Far more damaging to current affairs is the attitude of current politicians to regard political events of the Victorian era as irrelevant to the problems faced today. The centennial time lapse between the Victorian era and today is deceptively sizable, yet, as Ethel reminds us, it is only just over a lifetime. Failures and successes in Victorian foreign policy are still relevant to modern-day politicians.

The Victorian era was a period of great global movement and domination. At the moment of Victoria’s death she presided over a quarter of the population of the world. The magnitude of the British Empire afforded the nation power on a global scale disproportionate to its diminutive size. Britain still retains this power; the nation is one of five permanent members of the United Nations Security Council. Britain demonstrates that even a small nation can be formidable on the international scene, and that size really does not matter. Worryingly though, this political metanarrative of success accommodates no tolerance for foreign policy failure. Success is remembered while failure is forgotten.

The attitude of wilful ignorance towards foreign policy failures is evident when we consider our relations with Afghanistan. The First Anglo-Afghan war was fought from 1839 to 1842. Arguably this war was the biggest mistake in British foreign policy history, yet the policymakers that decided to invade Afghanistan in 2001 were mostly ignorant of its occurrence.

The basis for our first invasion of Afghanistan in 1839 rested on doctored intelligence concerning a largely imagined Russian threat. The war was a disaster. Afghan tribes, with invaluable knowledge of their country’s terrain, relentlessly beat back the superior weapons of the British Empire, until the British were forced to evacuate. Despite guarantees of a safe exodus, the Afghans ambushed the evacuees as they passed through the gorges of the Kabul River. The number of dead amounted to approximately 16,500. The massacre was so comprehensive that only one man survived, Dr William Brydon, an assistant surgeon to the army.

Lord Guthrie, Chief of the Defence Staff of the UK from 1997 to 2001, visited Durham University on 23 October 2014 to deliver a talk to Durham University United Nations Society entitled ‘Ethics in war, a figment of our imagination?’ I asked him this question: ‘Was Tony Blair aware that Britain had invaded Afghanistan in 1839 when he declared war on the Taliban in 2001?’ His answer was evasive: he said that there were members of the House who participated in the Parliamentary vote to deploy British forces in Iraq that had no knowledge of the First Anglo-Afghan war.

As Lord Guthrie argued that evening, war is not a good way to solve problems. It costs far too much emotionally and economically. Every soldier who has fought on behalf of Britain is entitled to respect. I have friends who have completed an Afghanistan tour, and even a short conversation with them reveals that they have had to be, and are fundamentally, incredibly brave. The decision for Britain to deploy troops in Afghanistan and Iraq, however, is one that rests on poor research; it is a tragic echo of the hasty invasion of Afghanistan in 1839.

High levels of Anglophobia in Afghanistan indicate that Afghans are not quite as forgetful as our policymakers with regards to the history of Anglo-Afghan relations. A brief interrogation into the shape of Afghan politics shows the popularity of Afghan leaders escalates after foreign troops exit the country. Once the British left Afghanistan in 1842 Shah Shuja’s popularity was greatly enhanced, and the same can be said of Najibullah when his Soviet backers retreated in 1989, and so too was the case when President Karzai began to distance himself from NATO toward the end of his premiership. The established pattern is evident: we are not the allies, but the hated invaders.

While it is understandable that our MPs may lack detailed knowledge of Afghan politics (they do, after all, have a duty to their constituencies, and are subsequently unlikely to be informed on the politics of the world’s 200 nations), we must have more effective ground-level diplomats to mediate this information to policymakers. There are no officially recorded statements from diplomats in Afghanistan during the run up to the 2001 invasion.

Without accurate intelligence on international relations, policymakers are unaware of local reality. As a consequence, British foreign policy is often ineffective, and occasionally harmful. The problem is exacerbated when policymakers rely on the military and soldiers, as opposed to diplomats, to report on the state of this local reality. The military is an institution that is reluctant to admit failure. As MP Rory Stewart has argued, there is a need for higher paid diplomats on the ground to gain greater international relations intelligence. These diplomats would be in a position to obtain granular knowledge of other countries. Crucially, they are positioned to give honest assessments of reality, without having to fear the repercussions of reporting failure. They are able to recognise foreign policy failures sooner, and get Britain out faster.

Although it does seem likely that Blair had his own agenda for going to war, he was not working in a vacuum. Blair was operating within a culture that does not easily admit failure in foreign policy. To place the blame solely on Blair is to imply that failures in foreign policy such as those which resulted in the 2001 invasion of Afghanistan will not occur again. However, this is a misguided notion, and already similarities can be drawn between what happened in Afghanistan and what the Government was tempted to do in Syria, August 2013.

The service held at St Paul’s Cathedral on 13 March 2015 in memory of the soldiers that died in Afghanistan was both poorly advertised and poorly attended. Jonathan Rugman, a Channel 4 reporter, commented on the thin crowd outside the cathedral saying, ‘in truth the British public moved on from the Afghan war long before British troops came home.’

I believe the British media has a responsibility to dedicate column inches to foreign policy failures; Britain cannot be allowed to forget the ongoing consequences of these failures, such as the 10,000 civilian causalities in Afghanistan during 2014 alone. Pressure should be sustained on the politicians accountable for these failures. An attitude of greater political humility may be what is needed to disprove Aldous Huxley’s adage that the only thing you learn from history is that no one learns from history. Britain needs to understand her failures and be public about them. The laborious progress of the Chilcot Inquiry is demonstrative that certain politicians are doing everything in their power to avoid their failures becoming public, in an attempt to preserve their reputations. The emergence of Isis has created an instability on the international scene that has not been seen for twenty-five years. In order to address this instability effectively, and leave behind Britain’s jaded foreign policy reputation, British politicians need to learn a lesson in humility.

It is clear why Afghan tribes, during the 1842 Kabul massacre, left one survivor. They wanted one eyewitness to report back to the British Government the failures of British foreign policy in Afghanistan. They need not have bothered; even a century and a half later, the message had not been received.