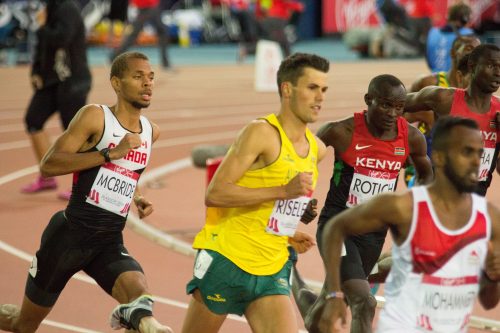 The Olympic Games: A Matter of Commercialisation and (Over) Conformity?

With the Rio 2016 Olympic Games now just a few months away, it is time to ask the critical questions of who will benefit from the Games, and crucially, whether we can trust the athletes who compete.

Sport has never been more popular. As a result, there has never been such a desire among multi-million pound companies and enterprises to claim a stake in what was once seen as a simple pastime that could enhance one’s health and well-being on a physical, psychological, and social level. Subsequently, the extrinsic benefit from sporting success has never been greater.

Inevitably this has resulted in athletes doing anything in their power to win—a notion that is frequently termed a ‘win at all cost’ attitude. Are athletes dedicating themselves to the sports ethic more now than ever before? Or are the extrinsic pressures from those above and around them determining their actions to an extent that would have previously been unimaginable?

The Olympic Games: a matter of commercialization

Sport does not only appeal to major corporations because of its ability to attract enormous numbers of dedicated ‘consumers’. Worldwide enterprises are fully aware that sports create a notion of thrill, dedication, and allegiance among those who watch and engage with them in a manner that can seldom be achieved through other forms of entertainment.

Coakley and Pike label sport’s unique ability to lure in consumers as ‘marketing hooks’.(1) The success of these ‘hooks’ is undisputable; people of all ages devote themselves to ‘get fit’ campaigns, and yet, often without conscious awareness, fall victim to the marketing ploys that are adopted by these corporations. Often people leave sport and leisure centres with a fizzy drink in their hand,  perceiving themselves to have ‘earned’ a beverage of their choice/ lack of choice.

The Olympic Games is the most watched sporting event in the world, with over 2 billion people tuning in to watch the opening ceremony of the Beijing Olympic Games and has the unique ability to reach out to countries across the entire globe.(2) The International Olympic Committee (IOC) continue to use the motto of ‘Citius – Altius – Fortius’, which translates to ‘Faster – Higher – Stronger’. Yet, they also continue to award the likes of Coca-Cola and McDonalds with key sponsorship deals for the Olympic Games, with Coca-Cola sponsoring the Olympics for over 85 years, as one of the Games’ main partners.(3) Such partnerships would suggest that the IOC are less concerned with ‘Inspiring a Nation’ (as expressed by the London 2012 organising committee) and with ‘Sharing the Spirit (the motto of the 2000 Sydney Games organising committee), than they are with making profit.

There is little doubt that the Olympic Games are a showcase of the immense talent and ability of all the athletes who compete, as World-Records continue to be broken, and previous perceptions of human capabilities continue to be exceeded through displays of remarkable endurance, speed, and strength. Nevertheless, as we watch and celebrate such incredible feats, our eyes are plastered with an array of billboards and advertisements from fast-food outlets seeking to use the positive associations of sport and of the Olympic Games as a ploy to force consumers to overlook the debilitative nature that their products have on the health and well-being of the consumer.

If Olympic officials are devoted to enhancing participation rather than profit, then it is time they proved it by ignoring large sums of money from corporations who are undoubtedly playing a role in the global pandemic of negative health and obesity.

The Olympic Games: a matter of (over) conformity

With a growing prevalence of commercialization at the major sporting events across the world, there is no question that the willingness of athletes to conform to their coaches’ wishes and to their sport’s increasing demands, will result in deviant overconformity at a level that has never previously been reached. The people who control sports are often those with financial and legislative power. They make their money through market dominance and a willingness to overconform to their profession. They expect the same from those that they control and invest sizeable amounts of money.

Consequently, performance moves across the continuum from aesthetic orientations to that of heroic orientations.(4) Those in control of the Olympic Movement, along with those who engage in sports ‘consumption’, have the desire to witness humans surpassing what has previously been achieved, by running faster, jumping higher, and travelling further. With the world becoming inclined to seeing superhuman effort and achievement, there will be only one result, and that unfortunately is doping.

Sports in which athletes can only become successful by realising the Olympic motto of ‘Citius – Altius – Fortius’ have inevitably been subject to widespread allegations of doping, and of using performance enhancing substances. It is this ‘win at all costs’ attitude that must be changed in order to see an end to such scandals. Until the punishment for athletes that cheat is greater than the reward for success, coaches, athletes, and those associated with them will continue to overconform to their sport and will continue to seek sporting success through any possible means.

With all of this in mind, it is vital that the Olympic ‘consumer’ celebrates the achievements of all the athletes — until proven otherwise, — as a significant proportion of those that compete at the Games will be ‘clean’, and will be enduring the challenge of committing themselves and their bodies to the sport they love on a daily basis, even though they are fully aware that others in the locker room may not be doing the same. Finally, the suggestion to disregard previous World-Records and begin a ‘clean slate’ would contradict any support for clean athletes, by assuming that these records could not and cannot be achieved through means of hard-work and sacrifice.