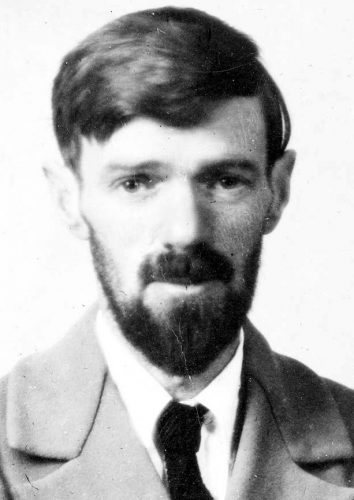 Bodily experience often seems difficult to adequately portray in literature, given its subjectivity. However, D. H. Lawrence’s novel Sons and Lovers arguably attempts to forge a style of writing centred on sensation. Despite exploring abstract notions of spirituality and the unconscious, Lawrence grounds his narrative in the experience of the body in a way that may be linked to his status as a ‘Modern’ writer. We may consider Hugh Stevens’ question of Lawrence’s novels: ‘can fiction be modernist when it aims to help us to recapture a premodern…relationship with nature and with our own bodies, and dissolve boundaries between the self and the world?’[1]

Firstly, the presentation of bodily experience may be linked to the structure of Lawrence’s narrative itself. Although the novel follows a chronological sequence, there is a lack of driving plot action. The structure is based largely around description related to sensation to suggest that bodily experience is privileged. He mixes nature and human consciousness to stress the importance of physical experience in connecting humans to nature. Early within the novel, he describes a pregnant Mrs Morel (mother of the protagonist, Paul). He notes how ‘Mrs Morel did not know what she thought. Except for a slight feeling of sickness, and her consciousness in the child, herself melted out like scent into the shiny, pale air. After a time the child, too, melted with her in the mixing-pot of moonlight, and she rested with the hills and lilies and houses, all swum together in a kind of swoon.’[2] The bodily experience of Mrs Morel transcends individual experience to include a subliminal recognition of unity with her unborn child and nature. The dreamy, inter-related nature of physical experience reflects in the lax prosaic style which is built around verbs denoting gentle action: ‘melted’; ‘swum’; ‘swoon’. Keith Sagar in his introduction to the novel argues that Lawrence creates scenes which ‘open out into larger significance, link up with other symbols to provide a matrix which is…a formal grid for the novel’.[3] Mrs Morel’s physical being resounds in the natural environment; she feels ‘seared with passion’ in the ‘great white light’ of the moon. The images juxtapose for their contrasting associations with violence and peace, yet Lawrence reconciles them in a narrative style that merges seemingly distinct descriptions of human experience and nature.  Consequently, physical experience and its creation of symbolic systems relating to natural settings and human emotions provides a basis for the novel’s structure.

Lawrence’s writing focuses on close-up descriptions of bodily features, particularly of women. Through free indirect style, Lawrence reveals the protagonist Paul’s visual perspective of his love interest Clara, noting ‘he saw the nape of her white neck…he noticed how her breasts swelled inside her blouse, and how her shoulder curved handsomely under the thin muslin at the top of her arm’ (S&L, p.286). However, whilst descriptions of women are filtered through the male gaze, as readers we may nonetheless recognise Lawrence’s attempt to convey the physical feelings and urges of a young man. Kimberly Engdahl Coates argues that in spite of past feminist dismissals of Lawrence’s work as misogynistic, ‘his efforts to incorporate the mysterious physiological sensations of the body into his aesthetic conception of language and the novel certainly are suggestive of what we might call a l’écriture masculine…Lawrence’s l’écriture masculine disarms language of its linear, logical, and/or progressive constraints in favour of a more fluid, experimental narratives that take into account the body’s physical experience of sexuality.’[4] Coates’ argument is compelling; Lawrence presents sensations and emotions in conflict because physical experience is complex. Paul notes of Miriam: ‘if she put her arm in his, it caused him almost torture. His consciousness seemed to split. The place where she was touching him ran hot with friction.’ (S&L, p.224) His reaction is seemingly negative, but it is one borne of confusion resulting from physical inexperience and anticipation. Rick Rylance makes a pertinent point when he argues that ‘the novel is consistently attentive to psychological conditioning’, citing ‘the interplay of desire and aggression, the adoption of postures of domination and deference’[5]. It is the contemporary society conditioning the male mind to adapt a certain role which centres on a rigid paradigm of dominant masculine physicality.

Lastly, we may consider how Lawrence engages with the transcendent notion of spirituality in the temporal body. For Lawrence, it would seem that spirituality is less concerned with the religion of the previous Victorian era and more aligned with a sensual connection between humans and nature. At the end of the novel, there seems to be a split between the soul and the physical body for Paul after the death of his mother, as his thoughts reveal: ‘now she was gone abroad into the night, and he was with her still…yet there was his body, his chest, that leaned against the stile, his hands on the wooden bar.’ (S&L, p.492) Lawrence hints at a disharmony, implying that bodily experience is separate from the soul, which is connected more to nature. Indeed, the image of Paul being ‘one tiny speck of flesh, less than an ear of wheat lost in the field’ (S&L, p.492) combines natural imagery and metaphysical speculation to reduce the importance of physical, earthly experience in comparison to metaphysical speculation about the soul’s experience tied to nature. The image of physical helplessness is corroborated by Paul’s frustration at being trapped on earth. However, at the very close of the novel, Lawrence offers a glimpse into the possibility for a positive bodily existence. He describes the ‘city’s gold phosphorescence.’ (S&L, p.492) The ending is anticipatory, and may be read as a metaphorical embracing of the nascent ‘modern’ world, where bodily experience is favoured over the transcendent and intangible experience of the soul.

We may conclude that physical experience permeates contemporary social themes for Lawrence. That physical experience is reflected in the syntactic form of the novel and is indicative of its pervasion of the literary sphere, as well as the social. Lawrence seeks to highlight the importance of bodily sensation as a crucial facet in rooting a sense of self, as displayed in the novel’s ending. Perhaps he resists the thrust of literary Modernism and its concern with the instability of the self, using the novel, as Stevens contends, as a ‘key artform which will help us to escape degeneration by reconnecting us with our primeval sources.’[6]