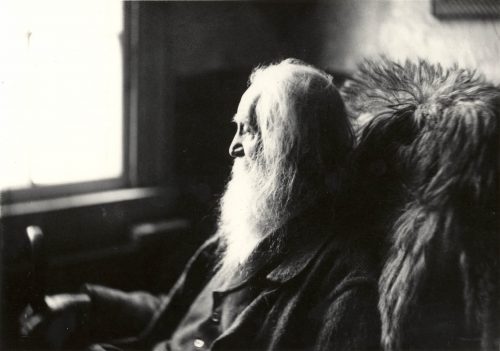 ‘Lifting the gauze’: How Walt Whitman connects with Americans in Song of Myself

Almost two centuries after his birth, Walt Whitman remains one of America’s most respected and well-loved poets. But why is it that we continue to feel such a connection to this 19th-century man and the words he wrote? The ideas of connection and unity are ones I will explore in relation to Whitman’s work.

Whitman’s treatment of the concept of the soul is particularly important in addressing boundaries, or lack of them, within ‘Song of Myself’. The poet perceives little distinction between his own soul and those of others, particularly in the line “Clear and sweet is my soul, and clear and sweet is all that is not my soul”. This suggests no difference or demarcation between the internal and external. However, the near-repetition of the first phrase, altered only by the words “all that is not”, suggest that the souls, while complementary, are nevertheless separate. The same concept of separation despite common qualities is seen later in the poem, as Whitman writes that “every atom belonging to me as good as belongs to you.” Structurally, this is complemented by the self-contained units of many lines with little enjambment. Thus, Whitman’s philosophy can be argued as viewing humans as different yet equal rather than identical.

Linguistic elements of Whitman’s poetry can also be drawn upon; colloquial expressions like “I guess” and “as good as” are given equal prominence to religious rhetoric, including reference to “worship” and “miracle”, alongside the lyrical “O I perceive”. These examples, alongside many others, create a tone that meanders between high and low register. That these varying “types” of language are contained within one poem reflects the message of the poem itself, that people of all kinds are essentially equal. While Andrew Lawson claims Whitman’s “high flown, Emersonian language of the soul” seeks to create a “cultural distinction” between the poet and the lower rankings of educated society[1], the presence of such rhetoric alongside other modes of language shows a lack of commitment to any class over another that ultimately renders boundaries arbitrary. This highlights Whitman’s intended message, that the souls of humans are both fluid and linked, and is supported by Edwin Fussell’s stance that Whitman, “simply draws upon whatever vocabularies he likes […] and toward this psychedelic eclecticism of vocabularies he maintains an attitude of imperturbable tranquillity.”[2]

Whitman’s chosen form and language seem to draw together many aspects of society and suggest a universal energy, but the image of Europe, and any tradition relating to it, is significantly absent from his poetry. According to Kenneth M. Price[3], Whitman’s own notes to himself, to “take no illustrations whatever from the ancients or classics” in the tradition of his European predecessors clearly influence his writing.The lexis of the poem centres on the American, with reference to “Kanuck, Tuckahoe, Congressman, Cuff”, traversing West to East coast. This metaphorically sections America off from its European forebears, reflected in the idea of the grass in the same passage as universal and yet entirely particular to the child, as Whitman writes, “I guess the grass is itself a child.” The nationality of Whitman’s subjects binds his subjects together not just politically, through the image of a flag, but religiously, as it is described as “the handkerchief of the lord”; this creates a shared spirituality and experience among the people which aligns with Whitman’s concept not only of souls, but of America as a whole— “this soil”—as united.  While Whitman professes the souls of himself and those around him to be as one, this applies foremost to Americans.

Structurally too, ‘Song of Myself’  diverges from any European influence: Whitman’s free verse does not constrain itself with meter, conforming to an explorative and open form of poetry produced in America in Whitman’s era which sought originality rather than imitation, described by Kenneth M. Price as “[an attempt] to contribute to a distinctive national literature”[4].

Whitman also examines female perspective, exemplified in the line “Twenty eight years of womanly life and all so lonesome”, which explores restraints placed upon the contemporary American woman. The way the woman “hides” and “none see her” signify the lack of visibility of women in his society, before sympathising and identifying with the American female with the assertion that, “I see you”. While gender boundaries certainly exist—Whitman’s fellow humans are delineated by sex, with the men as his “brothers” and the women as his “sisters and lovers”—the poet acknowledges and explores female experience. Whitman appears to take a similar stance on race: black and white Americans are made distinct from each other and yet are treated equally in his poetry. This idea is key in the section of Song of Myself in which Whitman writes of “the runaway slave”. His references to “his sweat’d body and bruised feet” and “the galls of his neck and ankles” suggest the poet empathises with the slave’s ordeal. While it could be argued that the repetition of “I” compared to “he”, “him” and “his” used to signify the slave, highlights the separateness of the two men, the fact that Whitman’s character within the narrative “gave him some coarse clean clothes”—presumably the character’s own—and “a room that enter’d from my own” suggests solidarity.

Furthermore, Whitman’s “memories” of events which, conveyed in the repetition of “I remember”, while fictional in his own case, were nevertheless real for many, can be argued to bridge the gaps between the experiences and emotions between different people which separated him from his contemporaries, thus allowing the “external world” to be channelled through himself. While it is true that, in terms of both gender and racial boundaries, Whitman could not have understood the experiences he spoke of, it is also true that he does not appropriate the identities of the marginalised members of society he speaks of, speaking consistently as an external narrator: again, they remain separate from him, and it is the abstract that appears to unite them.

‘Song of Myself’ does concern ideas of shared experience and fluid spirituality between people whose lives were otherwise very different to each other. However, Whitman concentrates primarily on America and its populace, deliberately shunning European tradition in both content and form. In fact, it could be argued that Whitman leaps from discussing America to the entire Universe, suggesting the enormity and significance with which he viewed his still relatively new country. We see Whitman’s political stance reflected in his poetry, a stance that revolved around unity above all else, mirrored in his treatment of the soul, memories and emotion. By sympathising with various social groups and classes, including slaves and women, Whitman also removes the barriers between them, adding to an overall sense of connection and transparency.