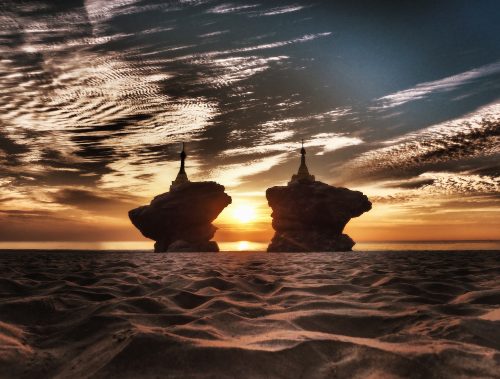 Myanmar and the Political Culture of Silence

Since August 2017, the international community has issued tentatively scornful denunciations of the Myanmar government and its “crackdown” on the Rohingya people, a Muslim minority that has resided in the country for generations. One month later, and with over 600,000 of the one million Rohingyan population displaced by Burmese military forces, government officials and heads of state have condemned the abuses, murders and rape. Many have described the situation as ethnic cleansing: strong words, with grave historical reverberations and the promise of reactivity.

And yet global opposition to the Myanmar authorities has amounted to little more than rhetoric, political posturing behind a lectern.

Rakhine state, the homeland of the Rohingya Muslims, is awash with the blood of its settlers, victims of religious persecution and violence who over the last twelve months have seen the indiscriminate slaughter of men, women and children. Many have lost their lives in backyard executions. Many have been burned alive in their homes. And hundreds of women and girls have been forced into sex slavery by the Burmese military and opportunist criminal organisations, with more than half of the survivors of sexual assault in Bangladesh refugee camps younger than 18 years-old. Profiteering on bloodshed is not unusual, but the inactivity of the world’s leading powers in the midst of this crisis is nothing short of concerning.

Perhaps the issue is that the problem itself has become normalised. Indeed, persecution is nothing new for the Rohingya, who, being considered illegal immigrants from Bangladesh by Myanmar authorities, have been denied access to health care, education, work, citizenship, and freedom of movement. For decades, they have suffered persecution and received only minimal assistance from outside powers, only for the situation to reach boiling point in 2012 when violence between Rakhine Buddhists and the Rohingya resulted in 200 dead and around 140,000 displaced.

Tensions remained high over the years, eventually precipitating the eruption of the current crisis in August 2017 when the Arakan Rohingya Salvation Army (ARSA) – a Rohingya military group – attacked Burmese police and border posts and killed the officers stationed there. This small band of religious rebels prompted the disproportionate and systematic prosecution since visited upon the entire Rohingya people.

By September 2017, the semi-democratic government of Myanmar has come under increasing opprobrium from the international community, U.N. High Commissioner for Human Rights Zeid bin Ra’ad al-Hussein describing the situation as a “textbook example” of ethnic cleansing that may amount to genocide, while in November 2017 U.S. Secretary of State Rex Tillerson commented on the “horrendous atrocities” and “tremendous suffering” caused by the Myanmar government’s campaign.  This potent language followed human rights groups’ criticism of the U.S. for their slow response to the tragedy and, though Tillerson’s statements also carried threats of sanctions, Washington and other U.N. members are yet to take international legal actions. Journalists, however, have noted that the careful language used by many statesmen and representatives has strategically avoided equating the slaughter to “genocide”, terminology which would result in international legal action against Myanmar.

The saddest aspect of this crisis is that there was a chance it could have been prevented. As Charles Petrie, a former U.N. representative in Myanmar said: “It has always been a question of when rather than if”. The situation was known to some degree, but international response was forestalled by the Myanmar government’s virtue of being a fledgling democratic nation. Ruled by a military junta between 1962 and 2011, United Nations officials have censured critics for fear that scorning the government could jeopardise U.N. humanitarian efforts in Myanmar and the country’s democratising transition. The U.N. Development Program’s reliance on state authorities to cooperate to achieve their humanitarian goals has restrained them from opposing abuses perpetrated by different authorities, making the U.N. in some respects complicit to a range of atrocities in Myanmar and elsewhere whilst shrouded by a “culture of silence”.

This pervading culture of silence and inaction has seen other countries idly sit by while at best monitoring, at worst ignoring, the deleterious situation in Myanmar. As it stands, thousands have been killed by the government-backed Burmese military and hundreds of thousands have fled Rakhine state. Most have sought refuge in neighbouring Bangladesh where the Bangladeshi services and foreign aid organisations are struggling to cope with the sheer number of refugees and their burns, wounds and psychological trauma. But the fear of upsetting the Myanmar government and curtailing its liberalisation have prevented action being taken against their brutal campaign.

Such self-censorship has been challenged on occasion, with U.S. authorities requesting access to the Northern Rakhine state for humanitarian aid and media sources, though reporting of the Rohingya peoples’ plight has thus far failed to penetrate the front covers of many news outlets. Stories of the horror are now being collecting from survivors in Bangladesh and distributed in papers and online, but whether action will be taken to end the tragedy is still far from certain at time of writing.

In a similar tone of censorship, the Myanmar people are victim to another abuse, one of misdirection and misinformation. Their government has utilised the state press for propaganda, drawing on a locally established trope where Rohingya people are sympathisers of Muslim extremism. Their media exploitation has also been conveniently fueled by the pivotal and incendiary ARSA attack on their border facilities, used to concoct ideas of an Islamic threat to the nation posed by “extremist Bengali terrorists”, so generating greater support for the military and a hostile attitude towards foreign critics and intervention. Fiona MacGregor, writing for Foreign Policy, noted the Myanmar military and government “is not only fighting the various insurgent groups within the country but is also increasingly engaging in a war of ideas with anyone at home or abroad who criticizes the treatment of the Rohingya”.

What does this mean in a world that is increasingly connected, where information is available at a moment’s notice and where very little goes by unseen, unheard, or unreported? It is the duty of journalists to discover and to inform, but media blackouts, information white-washing, and historical revision all still plague our informed world. Myanmar is just one instance. There, brutality is being perpetrated and not noticed beyond the borders, either willfully ignored or set aside by those with power but too scared to use it, or largely escaping the notice of those who read the news. So, could the problem be one of over-saturation – that there is simply so much being reported on in the world that we fail to take in stories of things happening in little places far away from us? Or is the problem broader, more problematic, and more insidious – is there simply so many stories of horror and brutality that we have become numb to its reportage?

As the Myanmar government demonstrated in its manipulation of news and perception, journalism can be a tool; it can spread ideas, it can spur activity. Words are powerful, and should be used to inform and to report facts, unbiased, without prejudice, without an agenda. A word like “genocide” can stir a variety of emotions, and such words carry weight in their own right. But it remains to be seen if the words of world leaders about the Rohingya people’s suffering will lead to positive action.

Aljazeera, ‘UN: Myanmar may be guilty of genocide against Rohingya’’, 5th December 2017

Can Anyone Stop the Tragedy in Myanmar before it’s too late, November 3 2017

For Years, U.N. Was Warned of Threat to Rohingya in Myanmar, October 16 2017, by Colum Lynch

As Tragedy Unfolds in Myanmar, the People’s Heroine Stokes the Flames of Hatred, by Fiona MacGregor, September 22, 2017