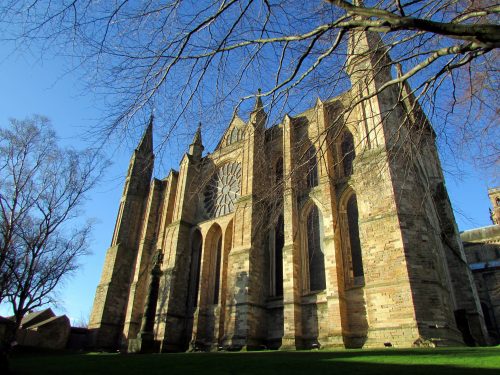 As the very name entails, Christmas is, for many, a time synonymous with the story of Jesus Christ. As the carols and sermons echoing in the Cathedral declare, we are encouraged to think of the Nativity, the occasion when God came to earth and Jesus Christ was born. According to Scripture, the birth of Jesus was the moment God became tangible, wrought in flesh and blood, a symbol of God’s love for mankind.

Christianity displays itself as a positive religion, one of hope, peace and redemption, encouraging kindness and grace between all people. God is presented as a compassionate being who wants the best for everyone, and the appeal of this message lies within its promise of sympathy, everlasting life and salvation. Often, this is the side of Christianity that is pitched in the Bible verses that Christians share on social media, and the messages that the Christian Union advertise.

However, there is another side to this religion which professes love for all people. A side which asserts contingencies and caveats on its promises. There are many rules which, if not kept perfectly, will prevent people getting into Heaven. This article will attempt to reconcile the concept of an omnibenevolent God with the idea that He demands impossible standards of humans and punishes them when they are unable to meet these standards.

Christians believe that God is sinless, absolutely perfect in all His thoughts and actions. Therefore, a good and perfect God cannot simply ignore sin, because it is so contrary to His nature. This is why human sin is so significant.

This word ‘sin’ encompasses all of the things religion considers bad that humans have ever done or thought. As a society, the majority of us abide by legal rules, restrictions, and requirements imposed ostensibly for our safety and benefit. Yet the Bible advocates a different set of rules, ones concerning not our existence as citizens in a society, but our morality as God’s creatures. It teaches us that it is wrong to sleep with someone you’re not married to, to get drunk, to be selfish, or to tell lies. How can a God who is so loving and forgiving also declare that many of the things that humans do are wrong?

One thing people infer from the Bible is that one must follow the rules in order to be a good Christian, or to go to Heaven. In several places in the Bible it is stated that anyone who has committed some sort of unrighteous act (that is, anyone who has ever done anything wrong) will not “inherit the kingdom of God” (1 Corinthians 6:9, ESV). They will not go to Heaven. However, if you look in the New Testament book of Romans it says, “there is none righteous, no, not one […] there is none who does good, no, not one” (Romans 3:10, 12, ESV). This statement suggests that no one is good enough to get into Heaven. This leaves us with a fundamental paradox and question: Why has God created such rules when we as humans and as His creation cannot measure up to them?

Most people appear to be mostly decent human beings on the whole. It is unlikely that anyone we pass on the street has committed murder or robbed people who trusted them. Where they have told lies, they might have done so for subjectively good reasons, and even if they want something they do not have, they typically do not hurt anyone to get it. As mostly ‘good’ people, people who do not go out of our way to hurt others, why should Heaven and the promise of everlasting life be withheld from us? Why should we lose paradise because we drank too much last Saturday night?

However, the commands against sin go further than most members of society might count as immorality. Even thoughts of harming people, crude jokes, and lusting inside your head are counted as ‘sin’.

The message of Christianity begins with the claim that no one is good. No one is able to obey the rules that God gives, not even the best Christian to have lived. Everyone has sinned, whether on a big, or a small scale.

The God of Christianity understood that humans are certainly going to fail in our endeavour to obey His divine laws, as set out in the Bible. However, because of His love for mankind, He wanted to make it possible for us still to get into Heaven. This is why Jesus came as a baby. The Bible explains, ‘For God so loved the world, that He gave His only Son, that whoever believes in Him should not perish but have eternal life’ (John 3:16, ESV). God came to earth in human form, in order to live the sinless life that we couldn’t, obeying all the rules that seem impossible to keep. Then, after living a perfect life, Jesus died a horrific death, enduring a Hell-sentence on behalf of all humanity. Since the Bible says that sin deserves punishment, Jesus underwent our punishment so that we would not have to.

Christians talk about this story using the word ‘Gospel’, which means ‘good news’. They want to spread this good news as they believe that it means wonderful things for humanity. They want to tell everyone that because Jesus came to earth 2,000 years ago, there is an opportunity for humans to escape from the guilt of their wrongdoings. All of the guilt of the wrong that has been done, and all of the punishment that comes from that, can be wiped away by trusting that Jesus alone has paid the price for that sin through His perfect life and sinless death.

When Christians talk about the birth of Jesus, and the reason that we celebrate at Christmas time, the point they are making is that you don’t need to feel bad, or to worry about what will happen when you die, if you trust in Him. Next time you see someone handing out Christian Union flyers, or wearing a maroon HUMAN jumper, consider stopping to chat with them, and see if you think that this offer of love and forgiveness might be for you. It takes nothing but faith, and we could all do with a little more of that in our world today.