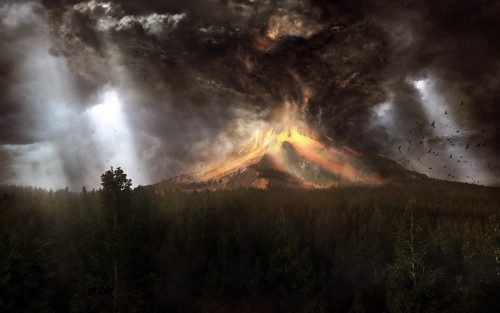 How can volcanoes help us fight climate change?

Volcanoes emit many gasses when they erupt. Among those are carbon dioxide, water vapour and methane. These are all greenhouse gasses and contribute to global warming. This may suggest volcanoes to have a negative impact on climate change. However, volcanoes do not emit these gasses in large enough quantities to have a long-term impact on climate. Crucially, the gas that could help us fight climate change is sulphur dioxide – a gas released in large amounts by volcanic eruptions. When sulphur dioxide is injected into the stratosphere it oxidises with water vapour to form something called aerosols.1 Confusingly, these aerosols have both a heating and cooling effect. Before the sulphuric acid combines with water vapour to form aerosols, the sulphuric acid depletes the ozone layer. This means that, following large tropical and mid-latitude eruptions, the winters are warmer in continents in the Northern hemisphere.2 However, aerosols also increase albedo; they cause more light to be reflected back into space before it reaches the earth resulting in solar dimming and a net fall in temperature. For example, the eruption of Mount Pinatubo in the Philippines in June of 1991 caused a reduction in solar beams by 25 to 30% and resulted in an estimated global cooling of 0.5°C to 0.7°C.3


However not all the powerful eruptions have these effects. One example is Mount St. Helens in the USA, which erupted in 1980 but saw no significant change in temperatures, despite it being a similar strength eruption as Mount Pinatubo. This is because only a small volume of sulphur was injected into the stratosphere, although with a large volume of ash being released. It thereby temporarily obscured most sunlight so that streetlights were on up to 135km away.4 The above example shows how the composition of the materials and gasses emitted by a volcano during an eruption determines the influence it has on the climate and the duration of these results. We can say for certain that not all volcanic eruptions are equal in terms of heating and cooling effects.

Initially, it may seem volcanoes are pretty useless at helping us fight climate change, and in some respects can accelerate climate change. Yet, they can help us develop a better understanding about the effect of gasses when injected in large quantities into the atmosphere. Studying the effect of sulphur dioxide is very different to using computer modelling. This is due to the complex interaction of various factors, which cannot be predicted with certainty in a model. As eruptions show, injecting sulphur dioxide into the atmosphere can temporarily lower global temperatures. We could apply this knowledge in the future to temporarily halt or reverse global warming though a process known as climate engineering, more specifically, solar geoengineering. In this scenario, the most feasible approach would be to inject sulphur dioxide or sulphate aerosols into the stratosphere using weather balloons to decrease the global temperature by increasing the amount of radiation reflected back into space.

However, we must be very careful about using climate engineering in order to avoid unintended consequences. It runs the the risk of exacerbating the situation and making conditions worse, especially for developing, low income countries in arid regions. This is because the outcome of injecting sulphur dioxide or aerosols in the atmosphere will not be felt equally around the globe. The injection of sulphate aerosols will reduce precipitation, particularly the African and Asian summer monsoons, which would affect the food supply for billions of people.5 Volcanoes can help us understand the consequences of increased levels of sulphur dioxide. But, a localised volcanic eruption is very different to a prolonged human engineered injection of aerosol particles into the atmosphere. Logically, we should focus our efforts on addressing the problem at the root of the cause. This entails a reduction in the amount of greenhouse gasses we release into the atmosphere, rather than trying to engineer technical high-risk schemes. There is, however, a rapidly closing window for action. Ultimately, the responsibility is on us as individuals to encourage a global response through international co-operation.

To put this need for urgency into perspective: 9 of the 10 hottest years on record globally have occurred since 2000 (and the 10th hottest in 1998).6 The IPCC predicts that 2020 to 2030 may be the last decade for us to take action on climate change before its effects are irreversible. This would include a rise in sea level, potentially of 2 meters, by the end of the decade in the worst-case scenario, leading to the displacement of 187 million people.7 Also, a 4 degrees Celsius business-as-usual global warming could occur. The potential outcome of which would result in the extinction of millions of species of plants and animals, with extreme heat waves, food scarcity, forest fires, the collapse of ice sheets, and tropical diseases spreading to higher latitudes. These frightening facts are no exaggeration, which makes it vital that something is done to stabilise the carbon dioxide in the atmosphere. But, to do this successfully we must tread very carefully, to ensure the sustainable future of our planet.

Volcanoes are not the answer to the climate change we have caused, and there is no easy or perfect solution. But, we are urgently running out of time to be able to make any meaningful changes in order to avoid catastrophe. As the popular saying goes “there is no planet B”.