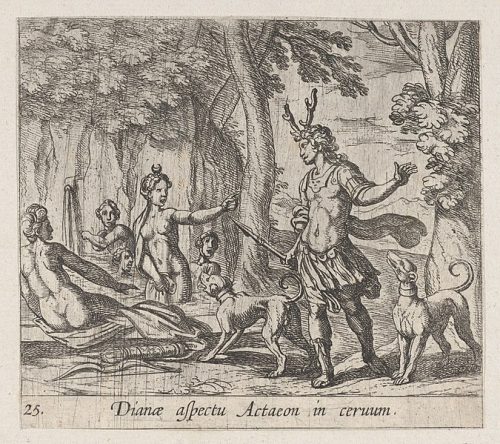 ‘A commentary on sight, knowledge and identity in Ovid’s tale of Actaeon in the Metamorphoses.’

As she splashed his hair with revengeful drops,

She spoke the spine-chilling words which warned of impending disaster:

‘Now you may tell the story of seeing Diana naked –

If story-telling is in your power!’ No more was needed.

The head she had sprinkled sprouted the horns of a lusty stag;

The neck expanded, the ears were narrowed to pointed tips;

Forelegs; she covered his frame in a pelt of dappled buckskin;

Last, she injected panic. The son of Autonoe bolted,

Surprising himself with his speed as he bounded away from the clearing.

But when he came to a pool and set eyes on his head and antlers,

‘Oh, dear god!’ He was going to say; but no words followed.

All the sound he produced was a moan, as the tears streamed over his strange new face.

It was only his feelings that stayed unchanged.

From Ovid’s Metamorphoses – a poem about transformations – the above passage centres around the metamorphosis of Actaeon, a hunter who stumbling upon the naked goddess Diana, is punished by being turned into a stag and then torn apart by his own hunting dogs. Among many elements, this story is noteworthy for its interaction with themes of intrusion and seeing that which is forbidden.[1] The result of such voyeurism is often violent, and no story characterises this more than that of Actaeon, whose tale embodies one of the most vicious of any divinity’s actions in the Metamorphoses.[2] It is interesting to note that other versions of this myth were available when Ovid was writing, but he favoured a version where Actaeon is innocent, treating the figure with sympathy by reaffirming that he was not at fault.[3] This passage is noteworthy in its portrayal of some of Ovid’s most prominent motifs of sight and identity; all of which he weaves into his tale of change from man into stag.

The motif of seeing – and its consequences – is a crucial one to this tale, and to much of the Metamorphoses. Platt argues that in Ovid, the desirous gaze which brings death is a direct result of a fatal mistake being made at the point direct gaze towards ones beloved is made.[4] However, when Actaeon catches sight of Diana, it is purely accidental – he is not a voyeur despite the fact that Ovid presents the sight to his audience in a voyeuristic way.[5] What becomes clear, therefore, is that to view is not always safe, as the viewer can be caught in the act of observing.[6] Actaeon has not, as Barkan argues, committed a crime,[7] unless we are to consider the act of seeing as a transgression. For Diana, being seen is a weapon which Actaeon can boast to yield. Through this, it becomes clear that forbidden knowledge, acquired by sight, is dangerous, and can only result in violent consequences. It is noteworthy that the ‘revengeful drops’ Diana splashes Actaeon with are aimed at his hair and face – in the absence of a weapon to strike him with, she inhibits his vision as a way to protect herself. This motif continues later in the passage when Actaeon is ‘surpris[ed]..with his speed,’as it becomes clear that he does not realise the metamorphosis has taken place – he has not yet seen himself. When he does, like Narcissus in the reflection of a pool, Ovid specifies that it is his eyes that look on his newly formed head and antlers. Sight has been his destruction, but here it also gives him clarity: sight presents to him the truth.

Ovid moves us to feel sympathy for Actaeon by reiterating that his encounter with Diana was purely accidental; crimen fortuna, an error was to blame. He develops this through one of the key features of metamorphosis into animals in the poem, that of loss of identity and the sense of entrapment felt by the victims of sudden change. This is because Ovid emphasises that although a physical change has clearly taken place: ‘neck expanded’ and ‘ears…narrowed into pointed tips,’the transformation is not mental, as ‘only his feelings…stayed unchanged.’ We see Actaeon entrapped in his new body when he attempts to call out, but ‘no words followed.’ Being turned into a stag, Actaeon loses a key feature of his humanity: his speech. Repeated mention of his lack of voice is a distinctive Ovidian feature, emphasising his loss of humanity.[8] Interestingly, earlier in the passage Diana appears to mock Actaeon with the words ‘if story-telling is in your power!’As she seems to foreshadow how Actaeon will not be able to speak of what he saw, as his speech will be eradicated completely. Although emotionally Actaeon is still human, James notes that he behaves animalistically when Diana instils fear into him, as he exhibits the instinctive nervous flight of an animal.[9] This fear causes him to run even before he realises he has been transformed, and only after seeing his reflection does his human rational side re-emerge and cause him to evaluate the situation. Through this, we are able to see how Ovid presents the human mind battling with the animal form to depict a distortion of a self image.[10] This loss of identity invites us to sympathise with Actaeon through the technique Hardie coined the ‘absent presence’[11] as immediately after this passage Actaeon fails to communicate with the dogs who destroy him.

Lastly, it is interesting to observe the sympathy Ovid creates for Actaeon and the role of the goddess Diana in this story. Schlam claims that the harshness of divine vengeance is an important organising motif in this story,[12] as Ovid makes clear that holy voyeurism, through seeing an unclothed divinity, must be punished – a structure that Barkan argues Ovid favours in his describing and defining of divinity in the Metamorphoses.[13] Although Ovid explicitly states that Actaeon is not to blame, throughout the first three books of the poem he builds up sequences of archetypal tales of virgin huntresses being accosted in the forest and raped. James argues that this convention means that Diana cannot help but misinterpret Actaeon’s intentions. She interprets his unintentional voyeurism as an attack on her virginity – a conclusion which to this point in the narrative is a correct one.[14] In this way, sight once again is presented as a dangerous weapon with devastating consequences, as we see that both Actaeon and Diana have their identity threatened and distorted in this story. As a virgin goddess, his eyes defile her, so in turn she causes a metamorphosis that will cause his loss of identity as well.[15] Thus, we see how identity, sight and the power of forbidden knowledge all work as key motifs of transformation, both in this passage, and the wider work as well.

James, P. “Crises of Identity in Ovid’s Metamorphoses.” Bulletin of the Institute of Classical Studies, No. 33. 1986.