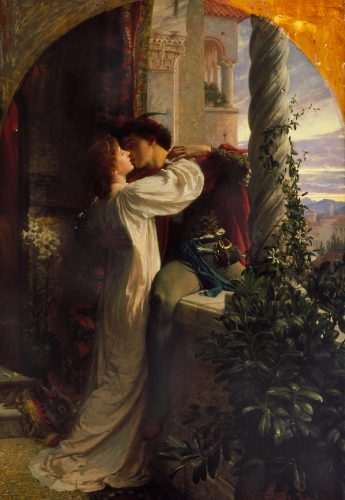 This study proposes to examine the invention and reinvention of the classic tragic story of love in various cultural settings and how it the story was affected by the local environment. Shakespeare’s phenomenal Romeo and Juliet and its incarnations as the American West Side Story and Russian Could One Imagine? will be examined. This study is anthropological in nature as it is interested in the cultural context of the stories.

However, in Shakespearean time social identity and marital duties were very much prescribed, thus the framing of love as subversive of the social order and tragic for the actors. Romeo and Juliet “working” as a story relies on our acceptance of family based on monogamous and heterosexual marriages and extended kinship structures defining positions of persons in society and how they are to move through it. The importance of kinship and marriage is its regulation of inheritance which in turn reproduces the social order itself. [2] Through these laws social hierarchies maintained. Shakespeare, though a pre-Enlightenment writer, had a tendency to place the dramatic and irrational outside of English society, leading it to inhabit a space of ‘other.’ Shakespeare tended to do this with his most audacious and controversial ideas in order to ridicule the vulgar without being penalized by authorities, but Romeo and Juliet is not filled with fierce sociopolitical critique, it is filled with passion. Rationality and reason, embodied in the male body, were geographically and symbolically located in Northern Europe, while irrationality and passion, embodied in the female body are seen as inhabiting any part of the world that does not adhere to European principles (however, Southern Europe is an unstable periphery). Thus, placing the narrative in Italy allows for a censorship-proof setting that exploits exoticism. In its time, the notion that the individual could be divorced from the social, that personal agency could be pulled out of obligation and structure and plugged into choice, was audacious and deeply controversial. Marriages between wealthy families were ‘more like treaties of alliance between sovereign states than love matches.’ [3] This is explicitly a project of political family-making, as in the absence of government it is kinship that mediates social relations. When the social order is maintained by each person playing their assigned part of the body politic, striding in one’s own direction unbalanced the entire system. Romeo and Juliet can be seen as simultaneously a parody of the English concern with kinship, propriety, social status, and inheritance, and a novel idea of how they may be defied at the personal level albeit not without consequence. This idea has become so ingrained in contemporary society that we struggle to see it for the rebellious act it was.

West Side Story is the 1957 American musical which revolves around the feud of the blue-collar white gang with a gang of Puerto Ricans immigrants. The story, while still concerned with the romance of the protagonists Maria and Tony, covers social issues such as the justice system’s treatment and policing of working class youths and the realities of racialization and poverty faced by immigrants of colour. Euro-American organization of society is said to be based on individual contract, where individuals are defined by their personal choices, and law, embodied in the state and its mechanism of regulation, presides over the legitimacy of such contracts and mediates when necessary. The pitfalls of this ideology are precisely what West Side Story exploits to mirror the pre-Enlightenment familial structures: the prejudices and restrictions of race, ethnicity, and social class that mould individual identities and agency (‘Life can be bright in America If you can fight in America, Life is alright in America If you’re a white in America’). The neoliberal environment which was already budding in the US as this musical was written, pits people, particularly from minority and impoverished communities, as competition for limited resources (exemplified by the discourse of immigrants stealing American jobs). The familial wars in Romeo and Juliet, while drawing on genealogy (and blood is powerful recurring image in their speech), are centred around political rivalry, not inferiority. But ethnicity and with it culture are “stickier” substances that cannot be repealed from the individual. Whereas Juliet cries out ‘Wherefore art thou Romeo?’ to mean why do you have a Montague name, Maria tells Tony that ‘You are not one of us, and I am not one of you’ showing the inalienable difference of the groups. While ethnicity itself is invented, it is a device of governing by fragmentation and control [4], operating on the basic premise of fear which Maria points to. This fear ultimately kills Tony and leaves Maria declaring her anger to both gangs as their heads droop.

Could One Imagine? (Russian: “Вам и не снилось…”) was originally a novella by Galina Shcherbakova which was adapted for the screen in 1981 and became a sensation with Soviet viewers. The book opens with a teacher taking her new class of 15-16 year olds to see West Side Story which is a mess of a production. The lead character Roma steps in to ask the teacher afterwards if she thinks pure love, not entangled in politics or society, exists. She says no, but he is adamant about his belief in the Shakespearean purity of love. Katya then transfers to the school and a young love story unfolds. While Katya and Roma may believe they are experiencing pure love, they are unaware their parents are intentionally keeping them apart. The couples in both of the earlier versions make plans to escape the society that won’t accept their love and it is in the act of flight that they find doom. In this version, the dependency on family, especially emotional, is much more apparent: there is no place to run, it seems. As the film critic Kuznetsova quickly pointed out, it is the mothers who doom the love: the ‘pseudo-mothering’ and controlling family environment. [5] That it is the mothers who are at the focus is not surprising, as an absent father, either physically or emotionally, is the typical Soviet family arrangement. [6] Shcherbakova’s story deals with the control by parents and the older generation of youth. This control can act as a divisive force because it deals with its own prerogative over the concerns of the young. Older women as gatekeepers of community values and police of morality is a problematic feature of Russian society which rubs uncomfortably against conversations about feminism because it gives power to one group of women by taking it away from other groups, particularly younger women and youth. This story, though paying its dues to tragedy, unlike the others hints that love beyond societal restrictions may be possible by growing out of the forces that keep them apart.

This analysis has shown is that romantic love faces its adversities across cultures. What we may perceive as free choice of partner is often dictated by our social identities. When this dictated line is transgressed, suffering occurs. Love is not inherently tragic but society inherently operates upon divisions.