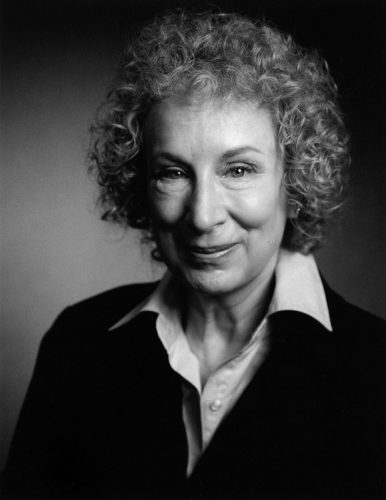 ‘How do Margaret Atwood’s The Handmaid’s Tale and The Testaments reflect the relationship between America and Canada?’

Margaret Atwood’s The Testaments (TT)(2018) has a curious relationship with its prequel, The Handmaid’s Tale (THT)(1985). TT seemingly expands on the world of Gilead by focusing on three very different narrative voices. However, this is not a ‘sequel’ in the expected sense of following on directly from THT. The 2018 novel does not give any clear details on the fate of Offred, the central protagonist of THT. Instead, it modifies our perspective on Gilead via narratorial multiplicity. This makes for a stark contrast to the rather isolated perspective of Offred in THT. Atwood is therefore able to provide a closer look at the relationship between Gilead, formerly America, and Canada in TT. In the following analysis, I shall explore the nature of this multiplicity, and how it reflects Atwood’s perspective on America-Canada relations in the modern world.

Atwood, in Survival: A Thematic Guide to Canadian Literature (1972), wrote on the tradition of Canadian literature. In this she imbued an implicit desire to juxtapose the tradition from generic tropes of American literature. She described the former as the literature surviving ‘awful experience’, rather than literature that tells of those who have ‘made it’.[1] This creates a contrast between the survivor and archetypal success figures of the America Dream ideal. Atwood’s literature, it would seem, is all about survival. The ecriture style of THT plays out one woman’s frightful bid to avoid disappearing completely under the totalitarian patriarchal regime. Frequent page breaks, lost sentences and linguistic inscription of meaning onto Offred’s body provide resistance against such attempts at survival.

TT seems to further this desperation for survival as a trope of Canadian literature. Each perspective provides a different outlook on a need to exist against ever increasing obstacles. We watch as the character of Agnes, the only narrator whose ageing is specifically emphasised by Atwood, defies her destiny of becoming a Wife to Commander Judd. She eventually finds peace in her relationship with her long-lost sister, Daisy (or Baby Nicole). Aunt Lydia is arguably the driving narrative force, allowing for a different viewpoint on the binary of oppressor/oppressed. She is predominantly a villainous figure in THT. Yet, in TT we discover her intentions to be rebellious against the regime, and the result of the regime’s oppression upon her.

I would argue that the narrators in both TT and THT represent Atwood’s achievement of reclaiming individual voices from oppressive regimes. Atwood has argued against such an achievement as having any connotations that necessarily can be deemed ‘feminist’.[2] Indeed, by exposing the other side of Lydia in TT, as opposed to directly following on from THT with a continuation of Offred’s story, Atwood forces us to deny any clear cut interpretations. This stylistic decision champions the unknowability of things. Nevertheless, we may still want to argue that this representation of the survival of individual voices against right wing oppressive regimes is acutely fitting with Canadian literary tradition. These narrators are not the typically nationalistic figures of American literature, whose success is characterised as allegories of the success of the United States. Instead, Agnes, Lydia, Daisy and Offred all fight personal battles to achieve success on their own terms. To some degree though, I would suggest that this more successfully conceived in THT. The solipsism of the singular, first-person narrative in the first novel enables for personal scrutiny and unknowability that is not fully possible with TT.

It is also interesting to look at this relationship between Canada and America from a thematic perspective. The fictional May Day resistance group works to free people from Gileadean oppression, and is a much bigger feature of the sequel. This is mainly the result of Atwood’s adoption of perspectives that defy borders between America and Canada. It centres on what Atwood aptly names the ‘Underground Female Road’, the route to Canada that is used by May Day operatives to get Gileadean women to safety. This interestingly foregrounds the thematic nature of the America-Canada borders. It suggests a kind of fragility and insubstantiality to these borders. Canada becomes the safe haven to escape from the oppression of right-wing America. We may add to this the contextual thread that the naming of the Female Road originates from the ‘Underground Railroad’, a route used to escape slaves to free states and Canada during the mid-19th century.[3] Atwood, we may argue, foregrounds the opposition between entrapment in America and freedom of Canada through an oppressor/saviour juxtaposition.

Admittedly, though, we can also add to this the context of Puritan settlement in America in 16th century. This is more predominant in THT, with focus on Offred’s witness of barbaric punishments that mimic Puritanical punishment of supposed witches, such as in the Salem Witch Trials.[4] This contextual background of transnational movement across borders complicates the idea that Atwood deliberately creates an international contrast between America and Canada. Perhaps we could see the right-wing oppressive regime of Gilead as a template for previous and future regimes. In this view, Atwood does not attempt to create a political commentary on, or allegory for, America versus Canada in her speculative fiction.

Thus, the complexity of the relationship between the THT and its sequel seems to be mirrored in the complexity of Atwood’s depiction of the international relationship between America and Canada. The evasiveness of Atwood on her authorial motivations acts as a deterrent from making any clear-cut assertions.[5] The ‘fun’ of speculative fiction, where one imagines possible futures, or alternative images of the present, is that it is so open to interpretation. THT has been advocated by several movements since it was published. But, arguably, TT is Atwood’s reclaiming of the original by prefacing it, and proceeding it, with unknowability. Atwood, in THT and TT, seems to teach caution at such ease with interpretation. The act of interpretation can be insightful, meaningful, even instructive. But, it can be uncontrollable and destructive as well. This is allegorised in the Gileadean regime’s interpretation of the Bible, making the sequel’s title ‘The Testaments’, fitting indeed.

[2] Sophie Gilbert, ‘The Challenge of Margaret Atwood’, The Atlantic <https://www.theatlantic.com/entertainment/archive/2019/09/margaret-atwood-handmaids-tale-sequel-the-testaments/597385/> [accessed 4 June 2020]. (Interview with Margaret Atwood – well worth a read to get an understanding of Atwood’s style!)

[3] Noah Berlatsky, ‘Both versions of The Handmaid’s Tale have a problem with racial erasure’, The Verge, <https://www.theverge.com/2017/6/15/15808530/handmaids-tale-hulu-margaret-atwood-black-history-racial-erasure> [accessed 9 June 2020] (Good for analysis on the problematics of the ‘Underground railroad’ terminology in Atwood’s THT).

[5] Gilbert, ‘The Challenge of Margaret Atwood’.