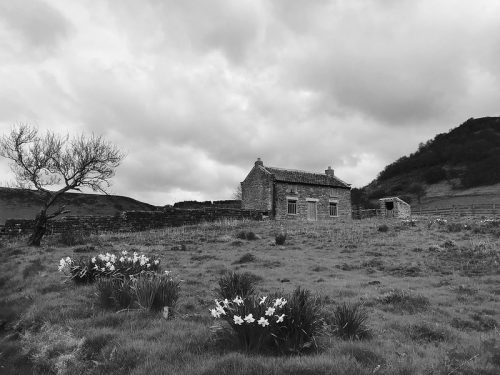 ‘Some Distant Heath’: A Collection of Poems by Ryan Robson- Bluer

Based on the lives of Charlotte, Emily and Anne Brontë
[Featured Image: Moorland Derelict by Not So Dusty, Flickr Creative Commons]

‘Yet, though I cannot see thee more
‘Tis still a comfort to have seen,
And though thy transient life is o’er
‘Tis sweet to think that thou hast been’

The sky is heavy and dark with clouds
Which cast a dusk-like midday mist;
Upon landscape scored by wind-drawn boughs –
Where truth and tale still coexist –
There sit, hands squeezed in fistfuls of grass,
Three lives that burst with flair unsung,
From storm-scarred plains these sisters craft
Their own refrain in nature’s song.

And passing through, you think but bleak
The hoary gloom of those rugged dales;
You see not how these three could speak
Such passion into those lonesome vales –
How utterly lost in hope of youth!
How blamelessly they must’ve loved this earth!
That even landscape so uncouth
Could stir such all-consuming mirth

II
following the death of Emily
But turn, perchance a moment; turn back,
See how things have changed,
How the wildflowers leave their petals strewn,
Like stars spattered by a cloudless moon,
And the alder stump’s a grave.
The harebells bow their heads, they gather
Like mourners, here and there;
The wind lifts up each blueish face
To nod and fall back into place,
As if in silent prayer.
And the heathers crave the skies; they reach
Their desperate arms t’wards the blue.

III
That quiet earth,
How silent it is – at times.

The hush of a graveyard, after snow fall has settled
And the trees bow, overloaded
Over inscriptions;

A clearing, paved with nodding bluebells
Confessing their unconcern,
They coalesce into purple puddles;

Like a curtain over an open window,
And a dinner table with one person missing
For the first time.

IV
From Scarborough, May 1849
I stand beneath a drizzling sky
My palms upturned; I breathe – I cry.

The cool water glints with breaking sunlight,
Like a field of precious jewels, now unhidden –
Like silver – I adore its coolness.

My spirit rests, attuned to this air.
Though the weeks march on like mourners,
Each gulp of cold – I know – is sanative:

The calls of dizzying gulls o’erhead
Making play with the castle,
Encircling our country’s figurehead,

The waves which break and speak of eternity,
Waves which lapped the side of Argo
Wet my feet too;

Each breath here is immortal.
I gulp ambrosia, straight from the hand of my God –
I am cleansed; I am lifted; I yield!

I stand beneath a drizzling sky
And with palms upturned, I worship:
Not the place, but the One who made it.

V
1855
Consider how the world subsides
When a cloud passes over the sun,
Dissolving into the dark like a waning moon –
How the room in which you sit becomes suddenly lonelier,
Even smaller, without the swathe of light;
Where once you observed the soft, breeziness
Of a semi-transparent curtain,
Hanging carefree over an open window,
Now it is nothing more than a faded and folding fabric –
And the wall standing opposite,
Once an involuntary canvas for the bounce of melted hues
Dripped by sunlight over grass, is now grey
And not white at all; without warning, sadder.
Even the shadows themselves depart –
For without light, even darkness grows darker.

I have seen this, and I have felt this;
That spot, somewhere deep inside my chest,
Where once I knew my sisters,
Is now darkly shrouded – stealing away,
As if through a gap in a fence.

And sometimes, when I breathe in deeply, it is restored
For a moment – this spot – and I imagine all is well
And the schoolmistress is calling
And they are only waiting behind a tree
Or dancing in the group of girls,
Emerging moments later to catch my eye
And run together to the school gates for Papa.

Other times, I imagine Emily is drawing me
As I stare silently out the window;
She draws me and if I’ll only turn around, she’ll be there.
Then she’ll fuss at me, insisting I turn back
Before she loses her concentration.
But when I look, again from the window,
Pained with the weight of hopefulness,
She is not there at all. And I sit
Until it feels again like she is behind me,
For she loves to draw, and I love to be drawn.

And sometimes I stand facing the sea,
Anne’s pallid fingers between mine,
And we look to the headland without words.
She sees something different here – I know.
When the water pools around her ankles
And her feet melt into the bubbling sand,
She disappears to somewhere I can’t go.

And I long for the wanderings of youth,
For those unfenced hills and vales,
For the willows and the streams
Which no longer appeal, I confess.
The sky is too dark, too heavy.

I long for the days of Glass Town,
And the whispers of my sisters’ Gondal,
Where surely they must now be – together
On some distant heath.